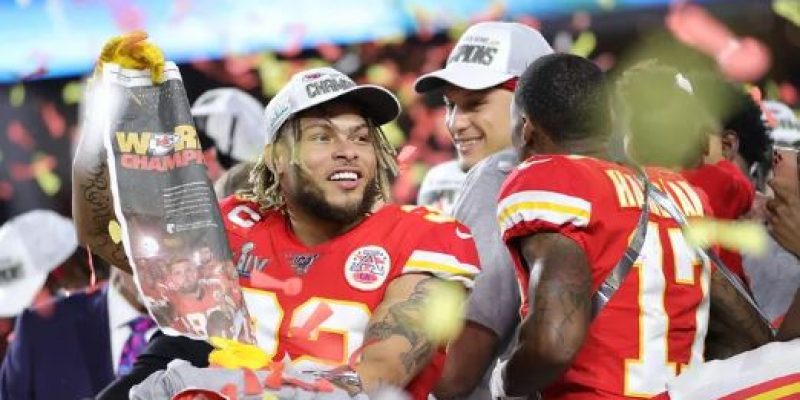 He is known as The Landlord in Kansas City now. But he will forever be known by another nickname by LSU fans everywhere.

Tyrann Mathieu, the Honey Badger, now with the locks and beard to match his intimidating play on the field, hoisted the Lombardi Trophy Sunday night as the Kansas City Chiefs stormed back in the fourth quarter to beat the 49ers, 31-20.

It completed a playoff run that began with the Chiefs down 24-0 early in the divisional round against the Texans.

Who can ever forget the dramatic turnaround Sunday night, after national television cameras showed Mathieu yelling at his defensive teammates to step up their game in the fourth quarter. At the time, things looked bleak, and Mathieu’s display looked desperate.

From that point forward, San Francisco’s offense amassed just 49 yards over four drives, a turnover on downs, and an interception.

Was it because of Mathieu’s leadership, his fiery, John the Baptist-like shouting of sorts? I wouldn’t bet against it.

And with that thrilling comeback, Tyrann Mathieu completed his own. Not from injuries or playoff losses.

But a comeback from a personal hell of his own making back in 2012.

“It was terrible because both the team and he wanted to be together,” said then-LSU head coach Les Miles. “It was the toughest thing I had to do during my time at LSU. He meant so much to so many people that removing him from the team was miserable. I’m talking about everybody from my family, to the people in the neighborhood to people all over the state. We all loved him.”

That hell is now long behind him. He has walked through it, and risen far above it.

After the game he illustrated his kid-like personality by showing his excitement and humility–not to mention that million-dollar smile–with a vulnerability many professional athletes don’t venture into.

“God is so good,” Mathieu said in response to a question about how far he’s come in his personal life since he was dismissed from the LSU football team over eight years ago. “So grateful for the people he’s put in my life. I truly believe I wouldn’t be here without those people. They sparked my mind and gave me some hope and obviously a lot of encouragement. So grateful. Just so grateful right now.”

Tyrann Mathieu is my personal favorite Tiger of all time. The way he played on the defensive end should have been more revolutionary than it has been. But the fact that no one since has been able to replicate it shows exactly how naturally gifted–perhaps even divinely inspired–an athlete Mathieu is.

Back in those days as a Tiger, the Honey Badger truly took what he wanted at times. And with one inspired exhortation to his teammates on the sideline, and eight minutes of Chief dominance on the field, he and his teammates literally stole the Super Bowl trophy away from the 49ers.

And for Tyrann, it was a victory as sweet as honey.