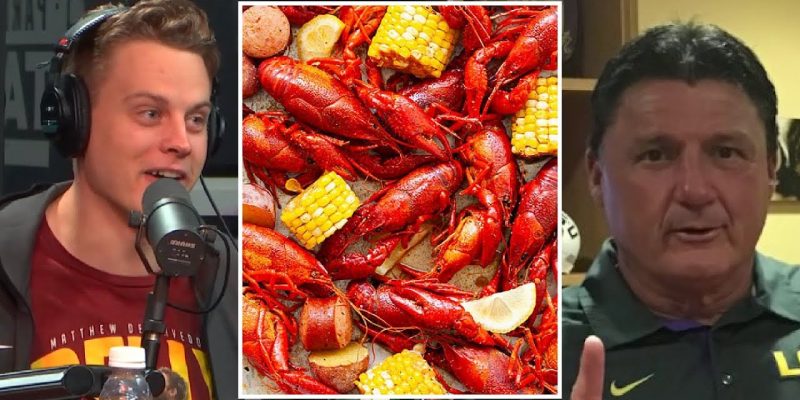 Two years ago in May, after the 2018 National Signing Day had passed, head coach Ed Orgeron hosted graduate transfer Joe Burrow. The former Ohio State quarterback had only one request when it came to dinner time.

“I was looking forward to having crawfish in crawfish country,” Burrow said.

There was one small problem. Mike Anderson’s, the restaurant they were at, didn’t have any crawfish. So Coach O made it rain. He called Mike Anderson Jr, and after one call led to another, fifteen pounds of the Louisiana specialty was sitting at the table.

Of course, they finished it all.

Good thing for Burrow O didn’t insist on a ham sandwich, his customary meal on Saturdays after games.

All jokes aside, whether it was the crawfish or Coach O’s personality or the clear opportunity Burrow saw at LSU, the rest has become history. Less than two years later, perhaps the most unlikely recruit-turned superstar in Tiger history was raising the Heisman and national championship trophies within a month’s time.

There is a lesson here. Fans who follow recruiting shouldn’t fret if the Tigers don’t land a particular big fish tomorrow (even though Jordan Burch would be nice). LSU has lost out in the past, and one could argue that certain losses opened a later door for Burrow to seize the opportunity in Baton Rouge.

The national champion LSU Tigers sit at No. 4 in the country in the recruiting war behind Georgia, Alabama, and Clemson. They signed 19 players in December, have gained verbal commitments from five others since then, and have available one scholarship to reach the maximum number of 25.

This is where Burch could cap it all off.

Joe Burrow himself was only a Rivals three-star recruit coming out of high school.

A taste not even fifteen pounds of Louisiana’s best crawfish can compare to.