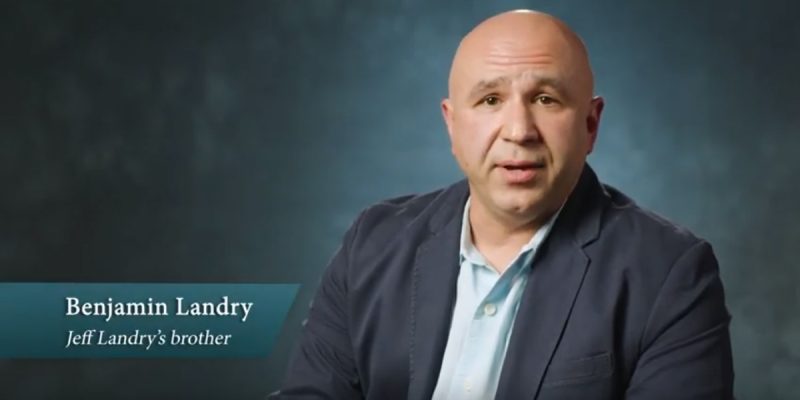 …and Landry has apparently decided to go on the offensive against the Advocate. Good for him.

First, here’s a video released last night featuring Landry’s brother Ben, a CPA in New Iberia and a manager and business partner in a couple of ventures the Attorney General has owned for several years…

If you can’t make it through the whole thing, here’s some background and some extra information.

You remember the Cameron LNG facility in Hackberry, south of Lake Charles, correct? This was the place President Trump came to last year to do a big speech in front of all the local muckety-mucks. Billy Nungesser with the stupid socks, and so forth.

The Cameron LNG project, which was a multi-billion dollar facility and one of the larger construction projects in state history, completely outstripped that area’s capacity for skilled labor. Carpenters, machinists, welders and other skilled tradesmen came from all over the state and region to work on the project, and the construction firms involved used a ton of staffing companies to make hires and process paperwork for the men and women working the Cameron LNG construction.

This Texas company Ben Landry is talking about on the video is Pangea Enterprises, which is owned by a current federal inmate named Marco Pesquera. Here’s the Department of Justice’s press release from last year about how things ended up for Pesquera…

Today, U.S. District Judge Fernando Rodriguez sentenced Pesquera to 38 months in prison to be immediately followed by three years of supervised release. He was further ordered to forfeit $5 million in a money judgment and his Houston residence.

Norma Linda Vega, 46 of Houston, Saul Atkinson, 47, of Brownsville, and Gwendolyn Saldivar, 41, of Snellville, Georgia were also charged and have pleaded guilty.

At the time of plea, Pesquera admitted that from approximately 2011 to January of 2018, he and his co-conspirators utilized legitimate and fictitious companies to petition for H-2B visas. Pesquera recruited and paid individuals to petition for visa workers they did not need and then utilized the foreign workers to fulfill labor contracts.

“This is a perfect illustration of our global reach and our ability to partner with U.S. and foreign law enforcement agencies on complex international, multi-jurisdictional cases,” said McGallicher. “DSS and our counterparts are conducting investigations like these on a daily basis around the world to protect the integrity of the visa process, the security of the homeland and the American work force.”

“HSI’s message is clear – America’s legal immigration system is not for sale,” said Folden. “In addition to posing significant security and safety vulnerabilities that could be exploited by criminals and others who pose a danger to our community, immigration benefit fraud undermines the integrity of our legal immigration process and penalizes those who abide by the law.”

“USCIS officers are on the job everyday looking to identify and expose those who attempt to defraud and exploit our nation’s immigration system,” said Cuccinelli. “We are proud to have supported our law enforcement partners in this investigation and pleased to have had a role in putting this fraudster out of business.“

“Pesquera and his co-conspirators defrauded the DOL’s H-2B program by filing false documentation to obtain visas for more than 1000 foreign workers to work in the U.S illegally,” said Grell. “We will continue to work with our law enforcement partners to vigorously pursue those who defraud worker visa programs for their own personal gain.”

Pesquera also admitted to obstructing the investigation by creating false documents in response to a federal subpoena.

He was permitted to temporarily remain on bond and surrender Oct. 4, 2019, to begin his sentence at a U.S. Bureau of Prisons facility.

The Landrys’ company, Evergreen Contractors, does temp staffing for industrial and other work. This Pesquera hired them on as a local subcontractor. According to Ben Landry in the video, the more he got a snootful of Pesquera the less comfortable he was with him. There are public liens filed against Pesquera, which would support Landry’s contention that he acted to blow the whistle on what this guy was doing, which according to the feds was to abuse the H-2B visa program to bring illegals into the country under fraudulent premises.

Understand that the construction projects in Lake Charles over the past several years have not-uncommonly been the venues for illegals to make their way into the country. In 2017 15 illegals essentially sneaked onto the payroll of Bechtel, who was the general contractor for the Cheniere LNG plant there. They were all arrested and, we understand, deported.

The point being when these giant construction projects are being built, particularly when multiple projects are going on at the same time and the rolls of skilled tradesmen are stretched to the breaking point, companies get so desperate for people that they’ll go the work-visa route. When they do, it’s never a surprise that people who don’t qualify for those work visas will slip in, or the companies processing the visas will abuse the process to make an illicit buck.

Obviously the feds saw that Pesquera was one of the latter. There is no evidence the Landrys are in that number; in fact, we understand the USCIS (that’s Citizenship and Immigration Services) cleared a separate company Ben Landry was working with of any wrongdoing in relation to the question of foreign workers, which isn’t dispositive with respect to Evergreen but it’s an indication of whether he’s a straight shooter. Additionally, there are lien documents filed with the courts in St. Martin Parish that would seem to substantiate the claim that Pesquera wasn’t paying his bills and was at least potentially defrauding his subcontractors.

All of which would seem to call into question why Bryn Stole and Jon Simerman of The Advocate appear to be working so hard on a story about how Ben Landry is a crook and a human trafficker, or whatever it is they’re attempting to accuse him of.

We don’t have much of a question, really, since this is all fairly obvious stuff. The Advocate has had it out for Jeff Landry since the very beginning of his time as Attorney General, when they went after him for objecting to a disgraced, bribe-taking former state senator serving as the executive counsel of the State Licensing Board of Contractors, an objection which panned out as wise given that bribe-taker’s eventual conduct, and when The Advocate attacked Landry for hiring a qualified, if politically-connected, black woman for a middling outreach position who had a legal issue involving credit card fraud when she was in college more than a decade earlier.

This is about Landry being the next likely Republican gubernatorial candidate when the 2023 elections come around, and an attempt by The Advocate to dirty him up in advance of that. If you remember when The Advocate sicced Tyler Bridges on David Vitter, well, get ready for more of the same.

Of course, the level of interest the Advocate has in the relatively manifest illegalities involving other political figures in the state is questionable. It has reported grudgingly at best about LaToya Cantrell’s unpaid taxes or credit card scams, for example, and its interest in the various foibles of John Bel Edwards and his family has been quite low.

But digging up some conspiracy theory involving Landry and his brother, on the word of a man sitting in a federal penitentiary? Sure. That has to be a Pulitzer Prize waiting to happen. Or something. One wonders why The Advocate thinks Ben Landry is such fair game, though it’s pretty chilling to think just because you’re related to a political figure you’re subject to having your windows peered through.

If this is the kind of fake news smearing the state’s only newspaper left of any supposed substance is willing to do, and given its treatment of the Bensons and their contributions to the Catholic Church, which according to the Advocate’s insinuations is tantamount to suborning child molestation, we know that’s what kind of journalism the paper practices, perhaps appropriate consumer actions, such as subscription boycotts and so forth, ought to be taken.