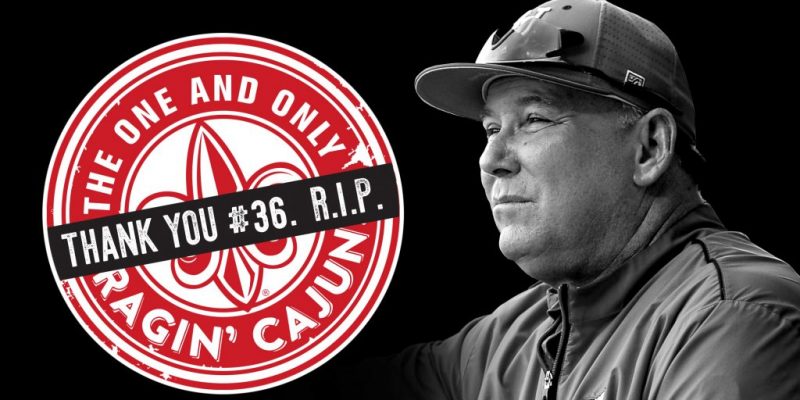 It will be emotional. And it will be tearful.

Eventually they will have to somehow play a baseball game.

On Friday, a statue of Coach Robe will be unveiled in front of Russo Park. His number 36 will also be retired prior to the game.

But Robe was more than just a baseball coach. He was a leader of young men, a mentor so many of them looked up to.

The impact he had on the lives of player after player, year after year, is of course beyond measure. His wake will be felt by countless people for years to come. He was a coach of life more than he was a coach of baseball. He was constantly reminding his players, “Baseball is what we do, not who we are.”

“In college, you’re exposed to this world of freedom,” says Jace Conrad, former Cajuns second baseman, “and coach held us accountable, whether you were the best player or didn’t play. He wanted us to become better men. When I first met him, I thought to myself ‘It’s gonna be tough to impress this guy; he has very high standards.’ But we had a strong relationship; he was like a second dad on the field.”

Scott Dohmann, pitcher from 1998-2000 who helped take the Cajuns to the College World Series, said, “Coach taught me the importance of being a good Christian, being a good husband to my wife and father to my two boys. It wasn’t hard to give him everything you had because he was doing the same for you.”

Voice of the Cajuns Jay Walker received a text message this week from a friend and former Cajun baseball player. It read:

I’m having a tough time thinking about this weekend.  I’m not sure how I’m supposed to feel.

A couple years ago, Robichaux spoke about the importance for him to build up young men. He ended the talk by asking the group, “What will you say when God asks you to give your account of stewardship and discipleship? He’ll say, ‘Tony I sent you over 600 boys; what did you do with them? Did you expose them to me? Did you teach them to become servant leaders? Did you teach them what a real man is?’ I don’t think I’ll be able to tell Him, ‘G, I got 1,000 wins, I’m the winningest coach in UL’s history, I’ve been to Omaha!

Even the man replacing Coach Robe will have conflicting emotions this weekend. Matt Deggs is a real live redemption story, and he makes no hesitation in saying who his savior this side of heaven is.

“Seven years ago, Coach saved my life. And he saved my family,” Deggs said last summer when he was named the new head coach in Lafayette. “I’m here today to say, ‘Thank you, Coach.’ We’re here today because of him.”

Perhaps the most intriguing thing about Deggs is how he is approaching this weekend. He is not running from the emotion and potential impact it may have on the final scores of the games, not for himself or for his players.

“I would expect them to [be emotional]. I’ve told them that,” he said. “The game at this juncture…we want to play our best. But if you get lost in emotion, go for it. We all should. We’re not going to run from that. We’ve addressed it multiple times. This is a huge weekend to unveil a statue and a number. To continue the healing process. We’re talking about a legend that meant so much, to so many people, in so many ways. A baseball game’s [eventually] going to break out, and were going to have a lot of fun.”

Certainly it will be tough before it gets fun again. It’ll be hard before the rush of the crowd gets behind their team and things begin to feel normal.

Then again, maybe it won’t feel normal for a really long time.

But in the words of the voice of the Cajuns, “It will be beautiful. There will be a lot of tears shed. And, that’s okay.”

It’ll all be okay. It always is. Don’t be surprised if the Cajuns win the game 6-3, in honor of No. 36. Sports seem to play out like that sometimes.

‪“And by the way, what you all know, but most people don’t, unlike the African American community, with notable exceptions, the Latino community is an incredibly diverse community with incredibly different attitudes about different things.”‬ ‪ — Joe Biden
More Quotes