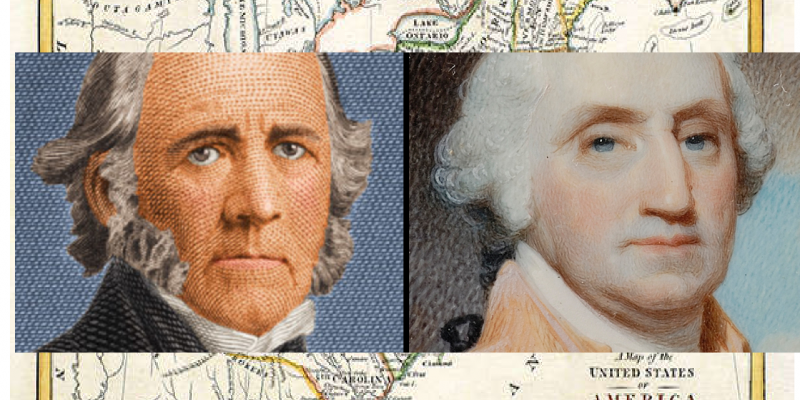 Today is Presidents Day, that day on the calendar on which pays respect to the 45 men who have held the office of President of the United States.

A merger of the original Washington’s Birthday and Lincoln’s Birthday holidays, we often gravitate toward George Washington as our poster boy for Presidents Day — after all, it’s common knowledge that he was our first president.

But was he? The first President of the United States, yes. However, if we’re to call him the first president in a more general sense, that also depends on where you’re from or which state you identify yourself from being.

Example: If you consider yourself a Texan first, then you can claim Sam Houston (first President of the Republic of Texas), David G. Burnet (interim President of the republic), or 11th U.S. President James K. Polk as your first president.

Here’s why, and with all due respect to your first grade teacher who taught you otherwise:

Washington was president from 1789 to 1797. While he probably could have been president for much longer (the popular legend has it that he could have been made king over time) he famously became “American Cincinnatus” by returning to his farm. That means, unless your state joined the Union during the Washington Administration, then he probably wasn’t your first president, per se. This is especially true of the Southern states, which The Hayride covers.

So below are the first presidents of each of our Southern states upon admission to the Union:

So who are Cyrus Griffin and John Hanson? They were Presidents of the Congress of the Confederation of States — basically a moderator-like role similar in many respects to the Speaker of the House. After serving as the first president of three Southern states, Griffin was later appointed by President Washington to a newly created District Court in Virginia and then was elected a U.S. Senator. Hanson was the first figure to go by the title President following the ratification of the Articles, and later became a Congressman under the Constitution.

Furthermore, those who are citizens of the states which comprise the original Thirteen Colonies, plus Vermont, Kentucky, and Tennessee, can claim their respective first President of Congress (see list below) as their “first president.” Peyton Randolph is a strong contender for the original 13.

For Texans, Sam Houston, the namesake of one of the nation’s largest cities among numerous other honors, is recognized as a founding figure but may rightly be considered the first President of Texas, whether a state or a freestanding nation. After interim and acting President David G. Burnet stepped aside, Houston became the first formal President of the Republic of Texas. Nine years after winning independence from Mexico, Texas joined the U.S. in 1845 under U.S. President James K. Polk. Texans may also lay claim to Henry Smith, who briefly presided over a provisional government during the Texas Revolution before being impeached. And at risk of landing in a heap of trouble for even suggesting it, Guadalupe Victoria, the first President of the First Mexican Republic in 1824, governed the early Texas settlers before the central government became despotic.

Louisianans and those who live in states that were part of the French Territory of Louisiana may also, and quite arguably, point to Georges Danton, the first President of the National Convention of the First French Republic in 1793. Like Mexico, the First Republic fell pray to despotism, too, with the later coronation of Napoleon Bonaparte.

Oklahoma, as a territory, goes back to 1890 and Benjamin Harrison as its first U.S. President. Prior to that, it was a territory claimed by various entities under many arrangements. We’ll let the Okies sort that one out.

Regardless of who you consider first, happy Presidents Day!

Presidents of the First Continental Congress:

Presidents of the Second Continental Congress:

Presidents of Congress (under the Articles of Confederation):