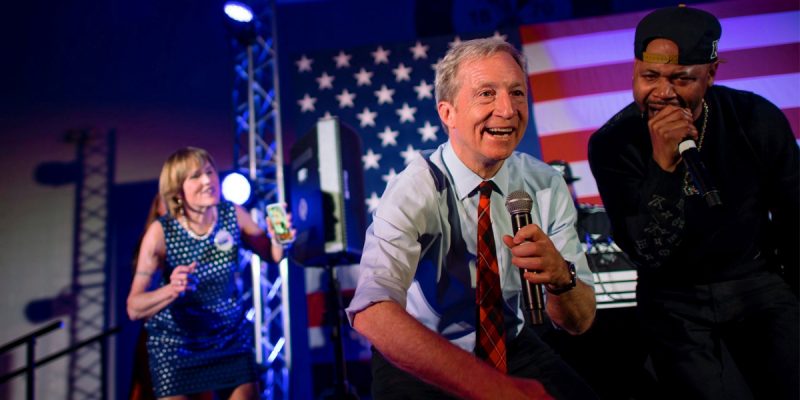 You wouldn’t have thought that, South Carolina, a state no Democrat had carried for president since 1976, would’ve mattered so much in their party’s nomination battle.

Yet here we are

After getting skunked in his first two bids for president and the first three contests of 2020 former vice-president Joe Biden finally won an election outside of the state of Delaware with a convincing victory in South Carolina.

And with Super Tuesday less than 72 hours away, Biden is seeking to right his listing candidacy and reset his status as front-runner after a prolonged hiatus as fear of a Bernie nomination shakes the Democratic establishment to its foundation and a flurry of activity.

Biden got some help post-South Carolina when billionaire Tom Steyer “backed that azz up” out of the race after spending a cartoonish amount of money in Nevada and South Carolina, targeting black voters with a reparations plan.

Steyer learned (or should have learned) what other well-heeled non-politicians find out the hard way: the law of diminishing returns applies as much to politics as it does economics.

And secondly, there are no shortage of unscrupulous political consultants around that will help you blow through every penny you have so long as they get their commission.

At least Steyer got to awkwardly dance on stage with Juvenile and be hilariously  impersonated by Will Ferrell.

And on the other end of the spectrum, overtly #NeverSanders Mayor Pete Buttigieg surprisingly bailed out  the race two days before the big national delegate scrum in order to avoid splitting the anti-Bernie vote and to potentially pull both Biden and Bloomberg over that all important 15% threshold for delegates.

Whether supporters of a smooth talking 38-year old mayor of a mid-sized Indiana city will transition to an often tongue-tied blustering 77 year old Beltway denizen is uncertain, though at a minimum Buttigieg’s departure could help Elizabeth Warren and Amy Klobuchar ice their competitive states on Tuesday.

As to the altruism of Mayor Pete’s “strategic quitting” after millions of early votes have already  been cast is also up for debate and speculation.

Perhaps Mayor Pete is looking to become Secretary Pete in a Biden Administration.

However one reality check that had to sting was Buttigieg’s abysmal support amongst black voters. And when Mitt Romney polled better with African-Americans, the writing was on the wall for “Mayo Pete”.

South Carolina once again proved to be the bulwark for the political machine candidate to the utter frustration of Bernie Sanders, who suffered yet another distant second in South Carolina despite his determination to avoid a repeat drubbing.

And while the Palmetto State isn’t currently considered a swing state, there are some things to consider.

First, over a half million voters participated in the 2020 Democratic primary; that’s more than 100,000 more than four years ago though only a marginally smaller turnout in 2008, when Barack Obama was running.  That’s an indication of a few things: African-American enthusiasm for Biden, a better GOTV operation by the Democrats, an energized party base, and the involvement of transplant voters in one of America’s fastest growing states

And that’s worth noting with a marginal Democratic house seat on the line, a targeted Lindsey Graham up for re-election, and the state’s electoral votes.  What happened there cannot be casually dismissed.