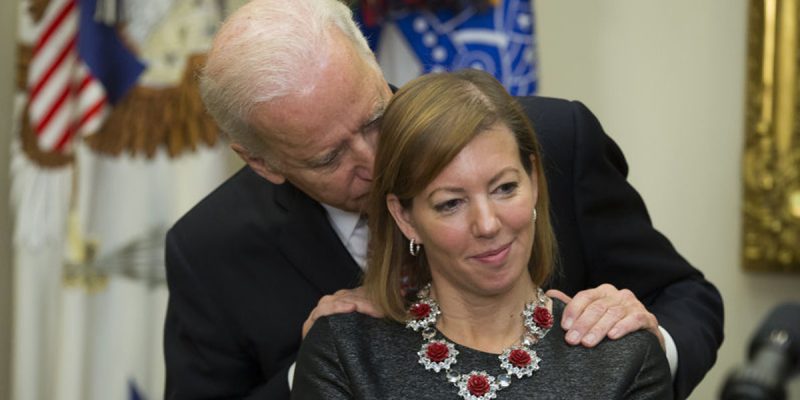 Actually, by standards even higher than that Biden should be finished, but we don’t need to oversell the point.

The former Vice President is in a bit of a jam thanks to a #MeToo allegation from a former staff assistant when he was a Senator. In 1993, Tara Reade says she was sexually assaulted by Biden – specifically that he put his fingers into her crotch in a penetrative way.

She actually came forward last year as more or less a rebuttal witness – Biden’s camp had attacked Lucy Flores as a liar for alleging that he had inappropriately kissed the top of her head and stuck his nose into her hair, and Reade was one of seven women who came forward and backed up Flores’ story by saying they’d had their own bad experiences with Biden.

For that, she found herself doxxed and accused of being a Russian agent – something Democrat establishment types seem awfully enthusiastic about accusing (how many are Chinese agents?). In Reade’s case, though it’s still a stupid allegation, there is a tiny bit of meat on the bone given that she had written a now-deleted post at Medium.com calling Vladimir Putin a “compassionate, caring, visionary leader.” The post was really more of an anti-American screed than anything else, but it was enough to make her a less-than-perfect accuser, apparently.

But Reade is back, and she’s now giving details. What’s more, she’s lending some heft to the idea of a cover-up. Because Reade decided to come forward again in January, and that’s when she ran into more institutional pushback…

As the campaign went on, Reade, who first supported Sen. Elizabeth Warren and then Sen. Bernie Sanders, began to reconsider staying silent. She thought about the world she wanted her daughter to live in and decided that she wanted to continue telling her story and push back against what she saw as online defamation. To get legal help, and manage what she knew from her first go-around would be serious backlash, she reached out to the organization Time’s Up, established in the wake of the #MeToo movement to help survivors tell their stories.

The Time’s Up Legal Defense Fund was the recipient of an outpouring of donations over the past two-plus years, and is set up as a 501(c)3 nonprofit housed within the National Women’s Law Center. It was launched in December 2017 and was the most successful GoFundMe in the site’s history, raising more than $24 million. Among the accusers backed so far by Time’s Up are some of those assaulted by Harvey Weinstein, as well scores of others with allegations against executives in male-dominated industries. The group has committed more than $10 million toward funding cases.

In January of this year, Reade spoke with a program director at NWLC, Ellie Driscoll, and was encouraged by the conversation. The fact that she was a Sanders supporter and had come forward previously in incomplete fashion didn’t dissuade Time’s Up. Driscoll referred her to outside attorneys, Reade said, and suggested that the Time’s Up Legal Defense Fund might be able to provide funding for PR and subsidize legal assistance.

But Reade was told that Time’s Up couldn’t help after all, on account of the fact she was accusing Biden, who was a candidate for federal office. Time’s Up took the position that if they got involved it would jeopardize their non-profit status, which is absurd.

The public relations firm that works on behalf of the Time’s Up Legal Defense Fund is SKDKnickerbocker, whose managing director, Anita Dunn, is the top adviser to Biden’s presidential campaign. A spokesperson for Biden declined to comment. The SKDK spokesperson assigned to Time’s Up referred questions back to the NWLC.

As for influencing the election, Reade said that she was deeply conflicted about continuing to come forward, given that Biden’s opponent in the general election is someone she sees as far worse politically. “I don’t want to help Trump. But what can I do?” she said. “All I can do is stand on my truth.”

In other words, Joe Biden can creep on any women he wants and the #MeToo crowd won’t lift a finger to help them defend themselves. But let a crackpot like Christine Blasey Ford, whose story was a provable lie and the product of pure partisan politics, come forward with something useful to the Democrat Party, and all the weight of that GoFundMe money and Anita Dunn’s political heft will form up behind her.

On the other hand, perhaps this won’t be the end of Tara Reade’s 15 minutes of fame. Biden cannot give a media appearance or make a speech of any kind without making a disqualifying, mindless gaffe, something he proved again yesterday on a series of friendly media interviews, among the highlights being making a statement that “the cure will make the problem worse.” They’re already talking about drafting Andrew Cuomo to replace him at the convention.

So maybe Tara Reade might be useful after all, if the Democrat establishment is coming around to the late realization that Joe Biden physically and mentally can’t do the job he’s running for. She might just be the tool that pushes him out of the race.

Or maybe not, since nobody really believes Joe Biden would be more than a figurehead for whoever it is that would really run the country were he elected, and perhaps those folks wouldn’t have as much influence with a Cuomo or someone else more lucid and less pervy.


Interested in more national news? We've got you covered! See More National News
Previous Article The Advocate Sends Out E-Mails Begging For Money, And Landry Lets Loose On Them
Next Article BREAKING: U.S. Files Charges Against Venezuelan President, Other Officials