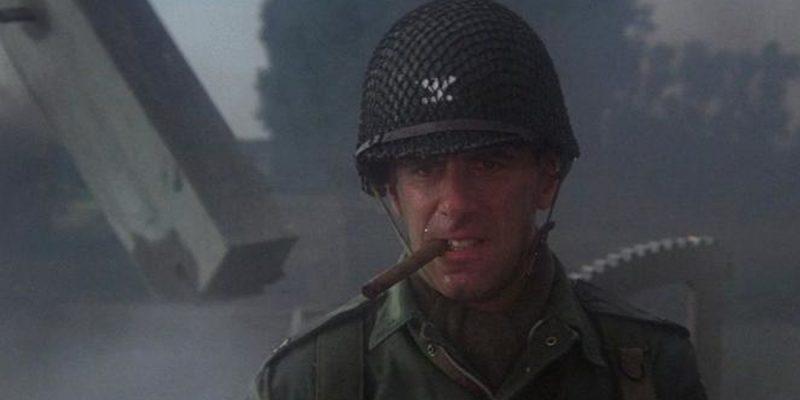 We aren’t going to get too far out over our skis on this, because after all we’re in the middle of a sell-a-thon of tickets and sponsorships for Hayride tour events that right now we’re not able to put on (see here for the skinny on that, and feel free to participate!) – but yesterday Peter Kovacs, the editor of the New Orleans Advocate, blasted out an e-mail which essentially begged the public for contributions. Here’s what that looked like… 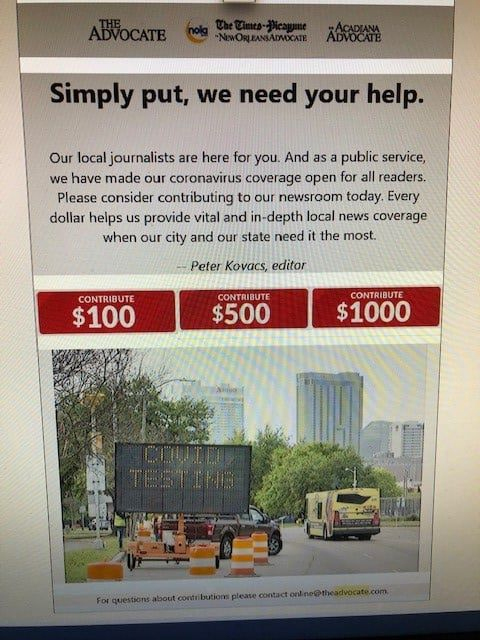 Of course, The Advocate is owned by John Georges, who as everyone in Louisiana knows by now is richer than Croesus and could afford to keep that paper running forever just with the loose change falling between the cushions on the massive couch in his living room. Or at least that’s what Georges wanted everybody to believe when he bought it, and then when he bought the New Orleans Times-Picayune.

So why on earth is the Advocate acting like a congressional candidate two days out from the campaign filing deadline begging people for money over e-mail? And why is Kovacs asking for donations to a for-profit newspaper?

Hey, like we said – we’re passing the hat too, but at least when we’re begging we’re actually selling something. We’ll feed you dinner and give you an opportunity to hobnob with prominent bigwigs and fatcats. We’ll even give you a signed copy of our publisher’s novel.

What is Kovacs offering? Peace of mind that his marks are “supporting great journalism?”

This isn’t a good week for that, after all, because “great journalism” really isn’t what The Advocate has been doing.

There was the story of Natasha Ott, may she rest in peace, which The Advocate’s reporter Jessica Williams and their editors botched so badly campus newspapers around the country are snickering. We hate to make light of what happened to Ott, but at the time The Advocate initially reported on her we could see a journalistic Operation Market Garden was coming.

The Advocate reported that Ott, a 39-year-old social worker at an HIV clinic in New Orleans who was more or less healthy, had gotten herself tested for the Wuhan virus and then died waiting for the results. But Ott died suddenly – she was found on her kitchen floor. That isn’t how victims of the virus usually go, to say the least. The Advocate story made it sound like the virus killed her, driving two narratives: first, that the Wuhan coronavirus could take anyone at anytime and kill suddenly, and second, that the government’s response to the virus (assumedly driven by the failures of Donald Trump) is so inadequate that perfectly healthy people waiting on a coronavirus test are dying in the meantime.

Well, Monday the test finally came back, and Natasha Ott didn’t die of coronavirus. She didn’t even have it. The Advocate piece establishing her story, horrendously sad that it is regardless of what she died of, was completely premature as a coronavirus article and turned out to be a complete whiff.

And no sooner did they suffer that journalistic indignity but Kovacs put out his requisition for public support. The timing was less than optimal.

Especially given that The Advocate is just coming off a dud of a crusade against Louisiana’s Attorney General Jeff Landry, who it accused, based on the word of a convicted fraudster currently in federal prison, of having committed immigration fraud. That gave Landry a solid case of the screaming reds, and rightly so, and when he saw Kovacs’ email he went off like a Roman candle.

Here was Landry’s response, in all its glory…

It wouldn’t be particularly noteworthy for a Republican politician to pop off about the local newspaper printing things which he thinks are inaccurate. It would be a bit more noteworthy for him to do it in the context of the coronavirus and the frenzy surrounding it, which obviously lends a heightened sense of urgency toward getting accurate information out to the public and perhaps not trying to panic people who don’t need to be panicked.

But when he’s doing it AND hammering them for begging for money at the same time, you can just hear Elliott Gould from the movie…

Interested in more national news? We've got you covered! See More National News
Previous Article Be Warned That JBE Is Likely To Call A Special Session To Demand A Tax Hike
Next Article By The Standards Applied To Brett Kavanaugh, Joe Biden Should Be Finished