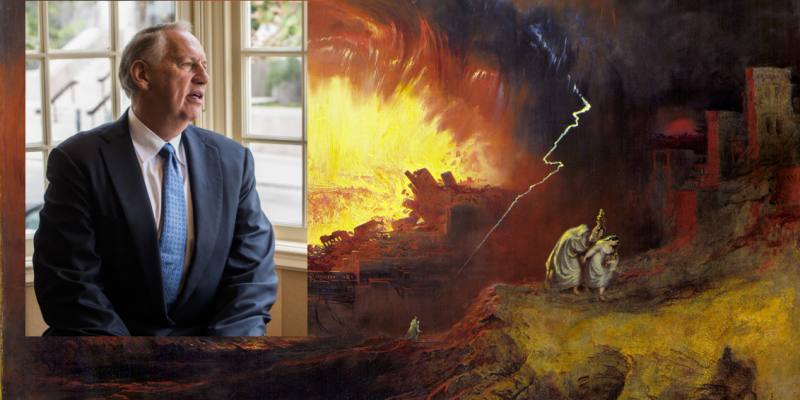 There’s much the mainstream press could look into this week that is not getting a fair amount of coverage.

How about the veracity of the claims made by the Silicon Valley minds who are guiding public policy reactions to coronavirus/COVID-19?

Or this: Half of all Americans are already on some form of public assistance, but what about the other half whose jobs are now on hold? Is this why we’re so complacent to take a weeks-long quarantine break?

What about the solvency of state unemployment insurance funds now that 3.3 MILLION unemployment claims have been filed as of this week? The previous record was 800,000 in 1982 — four times as low. Will stimulus be enough to cover the hole?

On that note: there’s Congress’s $2 TRILLION bailout. That would be $6,116.20 per person (not just family) if we cut out the assistance to various entities and mailed checks to every American.

According to a headline from, not a religious wire service, but NBC News, “Environmentalists and people with ‘depraved minds’ are also igniting ‘God’s wrath,’ according to Rev. Ralph Drollinger.”

In a blog post titled “Is God Judging America Today?” a pastor who leads a weekly bible study group for members of President Donald Trump‘s Cabinet appeared to blame the coronavirus pandemic on several groups, including those who have “a proclivity toward lesbianism and homosexuality.”

America “is experiencing the consequential wrath of God,” the Rev. Ralph Drollinger wrote in a lengthy March 21 “Bible study” on his Capitol Ministries blog, which caused outrage among several national LGBTQ advocacy groups.

In addition to gays and lesbians, Drollinger — who The New York Times recently referred to as the Trump Cabinet’s “shadow diplomat” — also laid blame on people with “depraved minds,” environmentalists and those who deny the existence of God for igniting “God’s wrath.”

Some leading evangelicals believe and teach that America is now experiencing God’s judgment.

If that is the case, as a public servant who is sacrificing so much in your attempt to turn our nation around, it would stand to reason — if those Evangelical leaders are correct — that you are wasting your time. Are you laboring against a foregone conclusion? I think not. But let me qualify that: I do not believe America is experiencing the forsaking wrath of God, but yes, American is experiencing the consequential wrath of God. [emphasis ours.]

Let’s explore this notion of the “consequential wrath of God.” And keeping with biblical tradition, we’ll first contemplate a few “woes” before divining God’s intentions.

The First Woe: few will read beyond the headline of the NBC News article and will proceed to make snap judgments based on whether they love or despise President Trump. They will not dare to explore this important theological topic.

The Second Woe: hatred for conservatism is driving several false liberal narratives during a pandemic that should be uniting us. As a recent case in point: Hobby Lobby refusing to cave in to the far-left’s mandate that all employees (no matter how part-time or contracted) be offered mandatory sick leave is driving the drive-by media absolutely bonkers.

And the Third Woe: the media is so illiterate when it comes to religion and theology that are whole blogs dedicated to providing balance to the subject and encouraging deeper looks into faith by mainstream reporters. We look forward to what GetReligion.com has to say about this when all is said and done.

Now that we’ve lamented our woes, back to this notion of “consequential wrath:” The NBC News reporter did her due diligence to get Drollinger’s side of the story, and that he sub-divided God’s wrath into several categories. But her description only went so far.

It’s Theology 101 that there are natural positive and negative consequences of disobeying God (Romans 8:28 as a positive example — “All things work together …” for those who believe) and there are obviously supernatural direct judgments and blessings from God, ranging from Noah’s flood to manna in the desert. What they are, exactly, we cannot always know, though many attempt to speculate.

What Drollinger was referring to in his article was the snowball effect of cultural sins, not the simplistic media interpretation of “gays caused 9/11” or whatever largely un-churched reporters come up with next.

To Drollinger, God’s wrath can be divided at least five ways:

2. Eschatological Wrath (the “Day of the Lord,” the Seven Seals, etc.)

4. Forsaking Wrath (where God removes his protection of a nation or a people)

5. Consequential Wrath (sowing and reaping the natural consequences of sin).

On No. 5, the aforementioned “Consequential Wrath,” this is where it gets tricky. An Evangelical would say that sexual promiscuity leads to HIV and AIDS, but a liberal reporter may mis-interpret that as the Evangelical saying that God “sent” HIV as a plague and as punishment. The same with school shootings, economic hardship, etc.

While there are preachers who speculate that tornadoes, hurricanes, and earthquakes are direct punishments by God (Cataclysmic Wrath, by Drollinger’s definition, No. 3 on his list) that was obviously not his intent.

Yes, mainstream media: sin does have negative effects. It is the pronunciation of God that actions have consequences, and this may fairly be classified as a judgment or even wrath in that God created the physical properties of this world to begin with. He’s the Architect and he knows exactly what can go wrong.

So it stands to reason that eating a bat does have consequences according to God — if that is indeed how Wuhan Flu started.

(Sidenote: Taxonomy has changed over the years and bats are no longer classified as birds but mammals. The ancient understanding was birds are flying creatures.)

While orthodox Christian theology teaches that we are no longer under the Levitical, Old Testament Law, there may still be consequences to … well, eating bats and other nasties in a Chinese wet market.

But again, it is woeful and lamentful that so few will read beyond the headline. The media still does not get religion right, not even during a plague.