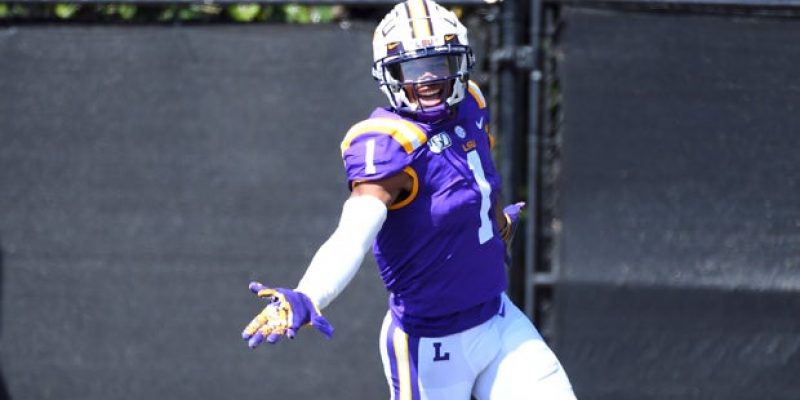 Ja’Marr Chase has broken the mold.

Not the case with Chase.

The rising junior is a superstar All-American and Biletnikoff Award winner of the LSU Tigers, and according to NFL experts, will be a highly coveted first rounder in next year’s NFL draft

He’ll even be switching to the program-honored No. 7 this fall.

But before the national stardom came his days at Archbishop Rummel in Metairie and a winding, a very winding, road.

And a very personal one.

His beloved late grandmother Thais Woods loved the color purple. She had been at the heart of her grandson’s recruitment, but sadly died on January 16, 2018, before Ja’Marr took the field for LSU, before he’d even signed with a school.

For a long time it looked as though LSU wouldn’t even be the final destination for Chase. He balked at the idea for the longest, precisely because everybody who talked to him wanted him to go there. In fact, there was another purple firmly in the mix for the star from Metairie’s services, and if not for a snafu by the NFL Network, Chase might very well be dressed in a different purple today.

As a TCU Horned Frog.

Of course that was five months after he committed to the Kansas Jayhawks for eight days in early February, before decommitting.

Eh, let’s not go further on that one.

Back to the story. Chase was prepared to verbally commit to TCU on his grandmother’s birthday in early July, so he could wear her favorite color live on television. The moment should have been special, as Chase had prepared a shoe box with a TCU hat and gloves. He planned to speak about his grandmother and provide the exclamation point by telling the nation what her favorite color was.

Moments later he was off to the side of the NFL Network set, on the brink of tears. At that time, Thais was still battling cancer, and her “baby,” as she called him, would not be announcing his decision after all.

What happened with the NFL Network that day may prove how much destiny does indeed play a part in life.

Four-star recruit Greg Emerson injured his leg earlier in the week during the Opening Finals at the Nike World Headquarters in Beaverton, Oregon. He limped onto the stage to commit to Tennessee, and when the NFL Network loved his story so much, they kept Emerson on for another segment, which was the first cut into Chase’s scheduled time.

The second cut was when Emerson took so long to exit the stage.

“He didn’t have a wheelchair, crutches or anything, because he was limping with a broken leg,” Geaux247’s Shea Dixon said. “The TV guy looked at Ja’Marr and said, ‘We’re out of time’.”

According to The Advocate, Chase’s announcement had already been bumped by the network from Sunday to Monday, and now this.

Jimmy Chase, Ja’Marr’s father, seeing his son in tears, was desperate to reach out. When Ja’Marr finally answered his father’s call, he told him the network wanted to do something in return for their decision with Emerson. Jimmy advised that his son decline the offer, because he didn’t want him making a decision while angry.

“I didn’t want him to do something emotional,” Jimmy said. “He was pissed. He came up with this idea on his own about his grandmother. They approached him about making the announcement. That was NFL Network’s idea. It wasn’t Ja’Marr’s. They pulled the rug from him.”

Seeing it all as an omen, Chase never did commit to wearing the purple of TCU.

Next came the infatuation with the Florida Gators.

“That was crazy,” Jimmy said in jest. “We went there, and he put on a uniform, and looked like an NFL player. The uniforms look great. We had this thing where if he wanted to do something and I went against him, he was going to do it. So I had to go with him.”

Indeed, teenagers can often be on the rebellious side. But even though Jimmy was “with him,” it didn’t matter.

Chase committed to Florida before July was out, mere weeks after the NFL Network debacle.

Next came a spark for the Georgia Bulldogs. But that ended quickly when Dad pointed out the stacked depth chart at wide receiver and a Bulldog offense that ran the ball almost twice as much as it threw it in 2017.

Oh, yeah. Ok, Florida it still is then.

Of course, Louisiana’s flagship university was patient and persistent, despite the young cub’s adventures. LSU stayed on top of pursuing Chase throughout the process, finally earning a verbal commitment from him after Thais succumbed to the cancer in January 2018.

“He didn’t want to deal with any of that,” Jimmy said, speaking on shutting down all the recruiting trips.

“We thought it was over.”

Except that it wasn’t.

Despite Chase’s sadness over his grandmother and his readiness for the whole thing to be over and done with, it would be an LSU-Auburn battle all the way to the midnight hour. LSU head coach Ed Orgeron pulled out all the stops to land the coveted star on February 2, less than a week from National Signing Day.

“They brought the whole staff,” Jimmy said. “And I’m like, ‘Ja’Marr, this is something that you can’t just minimize.’ ”

Orgeron spoke first, and one by one, each coach took a turn. Even defensive coordinator Dave Aranda, known for being relatively quiet, and of course coaching an entirely different side of the ball, told the youngster that they couldn’t find anyone who could stop him at their recruiting camps.

“It was amazing, because I had never spoken to Aranda,” Jimmy said. “He doesn’t do much talking. And he did that.”

Still, the hay was not in the barn yet. Or, the stripes weren’t branded. Jimmy and his son went to visit Auburn the very next day.

“Auburn was persistent,” Jimmy said. “They kept coming after him. Finally, he just wanted to take a trip, just to be hospitable.”

And so, on February 3 now, Chase began to consider Auburn.

“We had to do a lot of revisiting,” Jimmy said.

Talk about an understatement. It appears Dad was just as patient as LSU.

Obviously this circuitous, confusing journey had to end at some point. No matter what new prospect Chase flirted with, the home-state Tigers were always prowling in the background. It was the school that he couldn’t escape, because everyone wanted him to go there.

Fellow five-star receiver Terrace Marshall also had an impact, as the two families grew close in the process.

Now fresh off helping LSU to a national title, Marshall and Chase are indeed together, in the “money” years of their college careers, both primed to be top NFL draft picks.

“They’re kids,” Jimmy said. “It starts out as fun. Real fun. Then it gets real serious. You have to make a decision. The coaches don’t stop. Then they tell you everything you want to hear. It sounds good. Then they put on uniforms and it looks good. The kids get really confused. Then you got your friends telling you what they think. They don’t know half the story.”

The whole story can never be told, of course. But now that Chase is a Tiger, most of it can be enjoyed, maybe even laughed at. It is a tale that is certainly not the norm for a recruit, but one that all Tiger fans can be happy about.

Certainly, looking down on her grandson and all of his accomplishments, Thais can be happy. There are likely only tears of joy as she watches her “baby” dominate the playing field as he does. He would sign on the dotted line that day at Rummel two years ago in February, with a cross around his neck–his grandmother’s cross his aunt had given him.