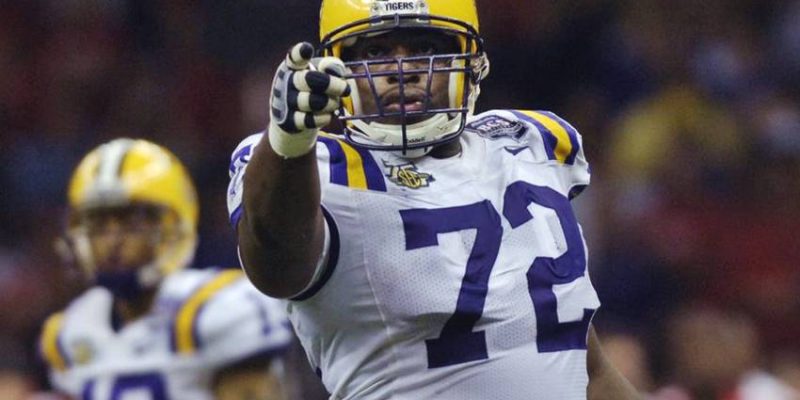 He could have left LSU after his junior season and been a first round draft pick in the NFL.

Instead he decided to stay and anchor a team that went on to win the 2007 national championship.

Glenn Dorsey, the most decorated defensive player in Tiger football history, has been named to the 2020 College Football Hall of Fame class.

“This means the world to me,” Dorsey told LSUsports.net on Wednesday morning. “I can’t thank LSU and my hometown of Gonzales enough for all of their support. We did this together. LSU gave me a chance that ended up changing my life.”

Despite playing on a defensive line that included star defensive tackles Kyle Williams and Claude Wroten, Dorsey made an immediate impact as a freshman. As he grew into the role of being the anchor on the defensive line, oftentimes being double- and triple-teamed, he struck fear into the hearts of offensive lines–earning first team All-America honors as a junior and senior, and taking home the Outland, Nagurski, Lombardi, and Lott IMPACT trophies after his senior season.

He also earned SEC Defensive Player of the Year as a senior, was a finalist for the Bednarik Award, and finished ninth in the Heisman balloting–the highest ranked defensive player that year.

LSU’s 2007 defense, which was coordinated by present defensive coordinator Bo Pelini, allowed 19 points a game and led the SEC in total defense at 288.8 yards allowed per game.

Those numbers would likely have been better had Dorsey not gotten injured midway through the season.

The star from East Ascension High was at the forefront of the Tiger defense despite a potentially gruesome injury during an October tilt against Auburn. Freshman offensive lineman Chaz Ramsey dove at Dorsey’s feet and cut blocked him, while Dorsey was occupied by another Auburn lineman.

Dorsey’s knee buckled in a way it shouldn’t have, bending in a disturbing manner.

There was no penalty called on the play.

On the other side of the field, then-head coach Tommy Tuberville defended his players and the play.

“We do not teach it,” he said. “We won’t tolerate it. One thing all the coaches in our league have talked about is chop blocks at the line of scrimmage and roughing the quarterback. We want the officials to call those.”

“Glenn Dorsey’s a great player. He’s very athletic—one of the best I’ve seen in the last ten or fifteen years as a defensive lineman. “It was two freshmen (Ramsey and Ziemba), and they were trying like the dickens to block him, and there wasn’t any malice in that.”

It makes sense, because usually not even a double-team of upperclassman could handle the All-American tackle. Still, the damage was done, and Dorsey, for the rest of the season, was clearly playing with the heart of a champion, with a resilience and pain threshold rarely seen in a player with his talent. He never did regain the explosion he had, not during that season anyway, but he was still stalwart enough to power the line and lead LSU to the national title.

In the spring of 2008, Dorsey was the fifth pick of the NFL draft, going to the Kansas City Chiefs. He played five seasons there and four with the San Francisco 49ers, where he was a solid contributor, especially during his first four seasons in the league.

The question will always remain, though: Did the chop block do more damage to his body then he would ever let on? Did it affect his explosion in the NFL? We will never know for sure.

The 34-year-old continues to do great things off the field as well. He established the Glenn Dorsey Foundation, which focuses on teaching youth the importance of education. He is also a motivational speaker and worker for the poor and underprivileged.

Just as his heart and infectious personality indicated when he wore the purple and gold, he still shows a unique humility and graciousness for the things that come his way.

“I can’t express how thankful and thrilled I am about this honor,” Dorsey said about the Hall of Fame induction, to be held in December. “There are so many people that helped me along the way that made this possible. I’m truly humbled and excited and will forever be grateful to LSU and the opportunities that playing in Tiger Stadium gave me.”