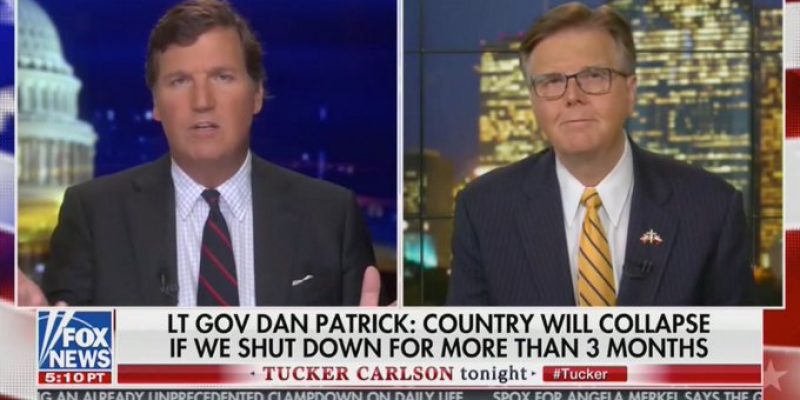 Texas’s lieutenant governor said in a FOX News exchange Monday that Texans “will take care of ourselves” during the spread of coronavirus/COVID-19.

On “Tucker Carlson Tonight,” Lt. Gov. Dan Patrick, who noted that he turns 70 soon, said he is willing to risk the consequences of catching the virus if it means others could “get back to work.”

“Those of us who are 70-plus, we’ll take care of ourselves,” Patrick said, to the prospect of government-mandated shutdowns lasting for several months. “But don’t sacrifice the country.”

He continued: “You know Tucker, no one reached out to me and said, ‘As a senior citizen, are you willing to take a chance on your survival in exchange for keeping the America that America loves for its children and grandchildren?’ And if that is the exchange, I’m all in.”

Patrick’s comments, though framed by sensationalist and left-leaning media as reckless disregard for senior citizens, echoes President Donald Trump‘s comments on Monday that the “cure should not be worse than the problem.” Patrick is Trump’s Texas campaign chairman.

“We have to open our country because it causes problems that, in my opinion, could bring far bigger problems,” Trump said.

Patrick said once the time is expired on the various orders, Americans should get back to work while exercising common sense — and voluntarily.

“We’ve got a choice here,” Patrick summarized at the end of the segment with Carlson. “We’re going to be in a total collapse — recession, depression — in our society if this goes on another several months. There won’t be any jobs to come back to,” he said, while still urging Americans to “be smart.”

Tucker referenced and earlier comment by Patrick on the subject:

“I don’t pretend to be speaking for everyone 70-plus, but I think there are lots of grandparents who would agree with me that I want my grandchildren to live in the America I did. I want them to have a shot at the American Dream. But right now this virus, which all the experts say that 98% of all people will survive is killing our country in another way … [it] could bring about a total economic collapse and potentially a collapse of our society. So I say let’s give this a few more days or weeks. But after that, let’s go back to work and go back to living. Those who want to shelter in place can still do so. But we can’t live with this uncertainty.”

From the hip: With now over half of Americans fully or partially on the public dole, it’s easy for most to dismiss Patrick’s call as insensitive to senior citizens, the immunity-compromised, or infants. For the hard-working remnant of modern American life, it’s a trade-off between one’s personal or family health and wellness versus collective safety.

Aside from the personal considerations, there’s also the longer-term risk: America reaching the equilibrium point at which economic distress and COVID-19 claim the same amount of lives. Translation: less prosperity equals more sickness and disease and fewer avenues by which the ailing may find affordable and accessible care. And to add to that: if American innovations in health care and pharmaceuticals fail, a large segment of the world will suffer.

And then there are the political consequences of government discovering new powers to control our daily lives. As a recent example: our “new reality” following 9/11 in which civil rights were increasingly thrown out the window in exchange for preventing terrorist attacks. As Dennis Prager explained:

… The longer-term ripple effects are potentially far worse. Economic disasters rarely remain only economic disasters. To give a particularly dramatic example, the Nazis came to power because of economics more than any other single reason, including Germany’s defeat in World War I, the Versailles Treaty or anti-Semitism. Nazi success at the polls was almost entirely related to the Weimar economy. Communist parties don’t fare well in robust economies, but they’re very tempting when people are in dire economic straits. Only God knows what economic dislocation the shutting down of American and other Western economies will lead to. I am not predicting a Nazi or communist ascendancy, but economic and political disaster may be as likely, or even more likely, than a health disaster.

But here is a prediction: If the government can order society to cease functioning, from restaurants and other businesses to schools, due to a possible health disaster, it is highly likely that a Democratic president and Congress will similarly declare emergency and assert authoritarian rule in order to prevent what they consider the even greater “existential threat” to human life posed by global warming.

And we all know what death and destruction those regimes inflicted on previously virtuous and relatively free nations: 30 million executed in Soviet Russia and 6 million in Nazi Germany. And that’s only during the periods of authoritarian rule. For generations after, the death rate in many post-Communist nations remains abnormally high as cycles of poverty continue. Check the stats if you’re skeptical. Even Germany remains high on the list.

Patrick is not alone in his admonitions. As one example, he is joined by fellow Houston-area conservative leader, Texas Sen. Paul Bettencourt, who questioned the wisdom of Harris County’s new shelter-in-place order. We’ll include his letter below as another example of the building conservative resistance and let him have the Senator have the final word. 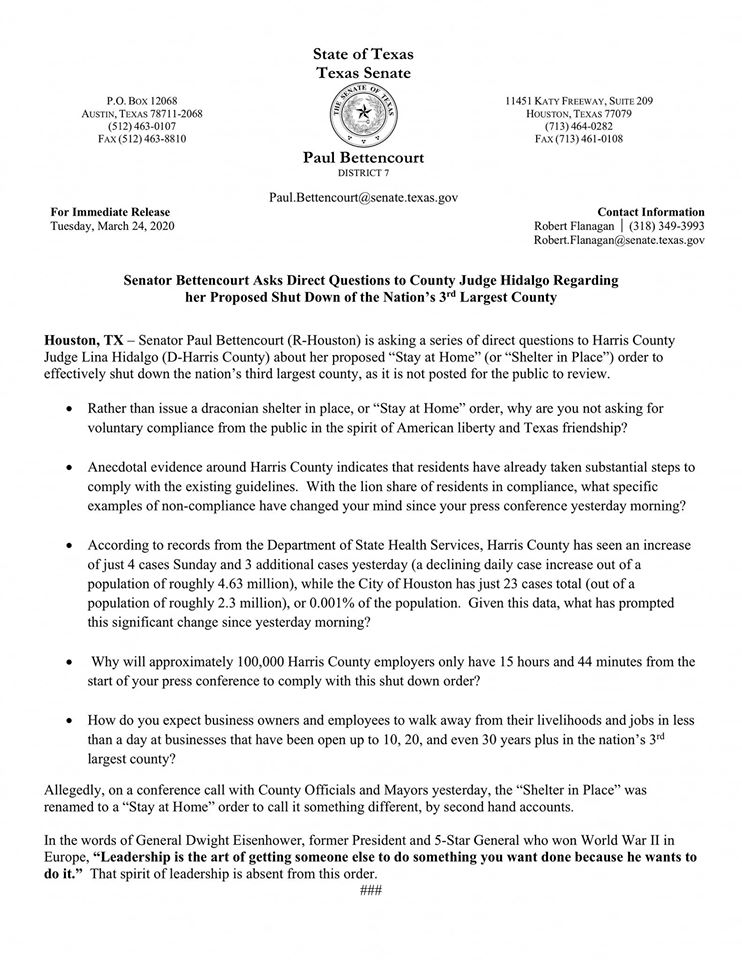 Interested in more news from Texas? We've got you covered! See More Texas News
Previous Article PURE POISON: Pelosi, Democrats Are in the Business of Destroying American Lives
Next Article BOYD: Trump Is Right, We Need An Exit Strategy For The Shutdowns