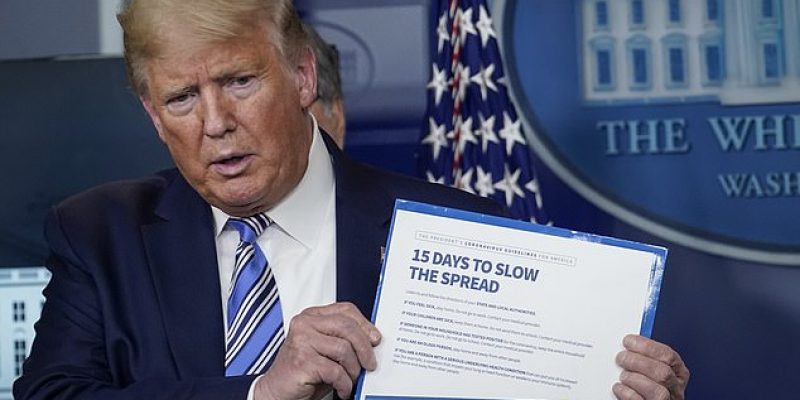 President Donald Trump’s hard work and daily press conferences with the White House Coronavirus Task Force are paying off as 61% of respondents in a new poll say his conduct in response to the COVID-19 pandemic has been “strong enough”.

That number includes 88% of Republicans, 56% of independents, and 41% of Democrats all responding favorably when asked about the President’s job performance specifically when it comes to COVID-19.

Below are some more specific data points from the new poll:

The President welcomed the news amid the ongoing health crisis posting to social media, “The Hill/HarrisX: 61% to 39% Approval Rating on handling of Coronavirus situation. Thank you!”

The new poll was conducted March 14-15 and includes responses from 2,001 registered voters.

Meanwhile, President Trump is said to be considering relaxed restrictions on less affected areas of the United States upon the completion of his initial “15 days to slow the spread”.

The President saw somewhat of a sharp drop in his overall approving ratings after the initial arrival of the Chinese coronavirus to U.S. shores but they have stabilized in recent weeks thanks to his hands-on approach and that unique showmanship that helped him all his life.

According to Real Clear Politics, President Trump’s average overall approval rating of all recent polls stands at 44.5%. I find it critical to point out that he began his first term of office after the 2016 election with 44.3%.

Given that his political opponents have thrown everything possible at defeating him in November, and even removing him before then, it should concern national Democrats that President Trump still appears to be no worse off than when it all began.