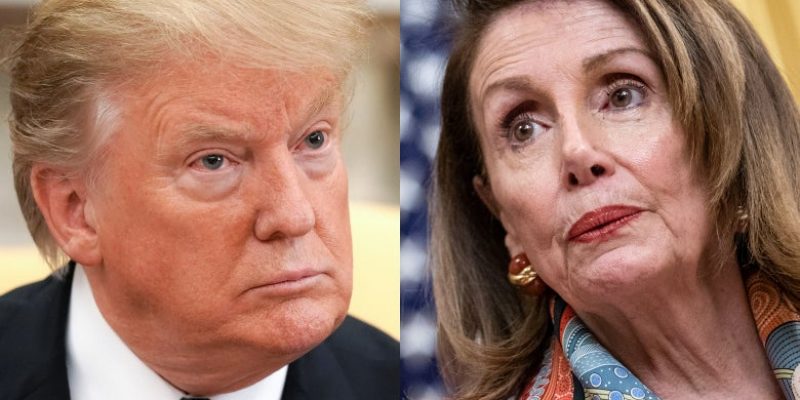 “It is a sad thing. She’s a sick puppy in my opinion. She’s got a lot of problems.”

You can’t get much more direct, and what seems more and more every day more truthful, than that.

President Trump’s words came during an interview with “Fox & Friends” this morning, after Speaker Nancy Pelosi criticized him Sunday night on CNN’s “State of the Union.”

“When he made the other day when he was signing the bill, he said just think twenty days ago everything was great. No, everything wasn’t great,” Pelosi said, referring to the $2 trillion bipartisan relief bill passed on Friday.

It is a shame the man has to defend himself so much from narcissistic gaslighters who are simply preying on the American people’s lack of knowledge or attention. After all, a citizen can’t pay attention all the time. But defend himself, he did, as he reminded the American public of his initial decision to restrict air travel from China way back in January.

It would have resulted in deaths “like you have never seen before,” said the President.

Of course, the biggest hypocrisy in Pelosi’s words is that she and her party have tied up the focus of Washington D.C. and the American public since Trump got into office years ago. Not the least of which was the latest trip into fantasy land with the impeachment proceedings. The House of Representatives voted to impeach the President in December, of course before the coronavirus reached the U.S.

If it hasn’t been one thing, it’s been another. For more than three years now. It is amazing that President Trump has the internal fortitude and focus to do absolutely anything, with the crush of criticism and distraction with which his enemies have attacked him.

“I think it’s a disgrace to her country, her family,” Trump said. “What a horrible statement to make.”

“All she did was focus on impeachment. She didn’t focus on anything having to do with pandemics,” Trump said later. “And she lost, and she looked like a fool.”

In an article last week, I wrote the following:

President Trump is doing everything he can. But the man will never do anything right in their eyes, and for you Democrats out there reading this, this alone should tell you something. Never is anyone, not even Barack Obama in my mind, always wrong. No one. And to constantly insinuate that the President is, while keeping Americans cloaked in fear and uncertainty, is a most insidious evil worthy of nothing but our scorn.

Indeed, I will say it again. And continue to do so until it changes. There are certain times in life where we as citizens must realize that we are in the middle of an enormous historical moment. And if nothing but criticism and vitriol comes out of some politician’s mouth, without any semblance of middle ground whatsoever, ever, that should indicate to us the truth and evil of their intentions.

No one is wrong all the time for three and a half years. No one. Not with the gains this country has so obviously made since Trump’s work began.

Admittedly, the President did downplay the threat of the coronavirus at the start of the outbreak in the U.S. a couple months ago, but considering how many of these diseases have popped up over the years without anything remotely like what we are seeing now occurring, no one should be blaming him.

Does the 2009 swine flu, under the Democrats’ second coming himself’s rule, ring any bell whatsoever? It is estimated that that pandemic produced an 11-21% infection rate of the then 6.8 billion people on the planet, or 700 million to 1.4 billion people total. This number is more than the Spanish flu pandemic of 1918, albeit with a much lower fatality rate. The World Health Organization didn’t declare the swine flu pandemic over until August 2010.

This was under the Presidency of Barack Obama.

And what about all the other diseases that so often pop up?

No, President Trump was perfectly and understandably human for saying the things he said in the beginning of this chapter of history. Dare I say, that he was also Presidential. Who wants a President who is going to jump the gun and start talking about shutting society down with mandatory quarantines at the first sniff of any disease?

But hindsight is 20/20 sometimes, and the revisionist historians, especially the modern ones that too often reside in politics—like your Nancy Pelosis of the world—are going to pounce when things like COVID-19 occur.

Sure, ignore the fact that you have distracted an entire nation with your political antics ever since this President has been in office.

Ignore the impeachment circus that immediately preceded the virus outbreak.

Ignore everything that you do every single day to destroy him.

You are fortunate that President Trump only called you sick. Because you are all too often deserving of much worse. And in this time of faith and hope in the American people, I truly wish you would give me reason, just once, to feel otherwise.