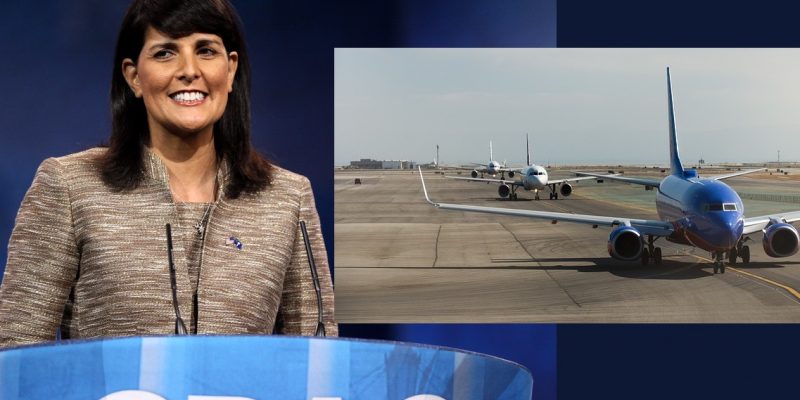 Former South Carolina Governor and U.N. Ambassador Nikki Haley resigned from Boeing’s board of directors on Thursday in protest of the company requesting a bailout.

Boeing asked for a $60 billion bailout from the federal government on Tuesday following President Donald Trump‘s offer to assist the industry, which has been saddled with canceled flights and travel restrictions since the international outbreak of coronavirus/COVID-19.

While praising her fellow board members, Haley said in a letter that rather than stay as a voice of dissent she would resign. “I strongly believe that when one is part of a team, and one cannot in good faith support the direction of the team, then the proper thing to do is to resign.”

Haley continued: “While I know cash is tight, that is equally true for numerous other industries and for millions of small businesses. I cannot support a move to lean on the federal government for a stimulus or bailout that prioritizes our company over others and relies on taxpayers to guarantee our financial position. I have long held strong convictions that this is not the role of government.”

Boeing has seen its share of troubles recently in the aftermath of two deadly crashes and grounding of its 737 MAX airliner. The crashes took the lives of 346 people, which led to a tense congressional hearing in November. The plane had many new elements including more powerful engines, a re-engineered tail, new wing designs, and updated software and hardware.

From the hip: Ambassador Haley deserves praise for her bold stance. She delivered her philosophy clearly and forcefully, as she is now famous for following her stint at the United Nations standing up for America’s interests. Music to our ears!

But this analysis really isn’t about Ambassador Haley.

Before we continue, it should be noted that Haley is clearly positioning herself for higher office with the roll out of a book and a turbo-charged speaking tour. Bailouts are going to be the subject of conservative outrage in the coming weeks and Haley wants no part of that while she’s riding high — at least not any more than she wanted to endure criticism over the Confederate battle flag flying at the state capitol during the height of racial tensions following the Charleston situation. Haley must have driven or walked past that particular flag tens of thousands of times, but only decided to take it down after the pressure was on. The same goes with her exit from Boeing, a company which (despite the losses incurred by the grounding of the 737 MAX) apparently did not build in much of a financial contingency plan for another 9/11-level terrorist attack or a rout of travel bans. We wonder what (future President or Vice President?) Haley had to say about that?

Again, this analysis isn’t really about Ambassador Haley. Instead, let’s take an honest look at the U.S. aviation industry as a whole in light of the COVID-19 breakout.

It is clear that international airline traffic spread the coronavirus to the U.S., but international passengers were not required to be quarantined. The entire state of California, perhaps, but not the specific ones spreading the virus, even after Trump’s travel ban. International travel is sacrosanct, after all.

Then came a disproportionately high number of frequent-flyer state and federal officials, Hollywood actors, and other muckety-mucks and their families who either tested positive or were fearful of having contracted COVID-19. Then it became “our” duty to self-quarantine, not just theirs.

And now, facing losses not incurred since 9/11 flight bans, airlines are being shown official favor. As one gross example: the Austin City Council shut down all indoor restaurants and bars in the Live Music Capital of the World during a weekend that should have been peak activity for the SXSW festival — only to give an exemption to airport sky lounges. The airport Chili’s or any of Austin’s local establishments with airport kiosks can go suck an egg, but airline owned Admirals Clubs can continue letting in sit-down patrons. That is, until Gov. Greg Abbott‘s emergency proclamations shut them all down at midnight today.

And then came the aforementioned bailout requests. Axios reported that Boeing’s production slowdown following the 737 MAX crashes shaved an estimated 20% off the nation’s GDP growth during that quarter.

As Mr. Trump has said during daily COVID-19 response updates, there is now “pent-up demand” for currently suspended economic activity and the economy will likely rebound once it is allowed to. But in the meantime, we can expect the intense favor shown to the aviation sector to lead to another round of corporate welfare handouts for an industry that should know better than not to save for a rainy day.

Bailouts are irresponsible and the antithesis of fiscal conservatism. But then again so is bad financial planning.