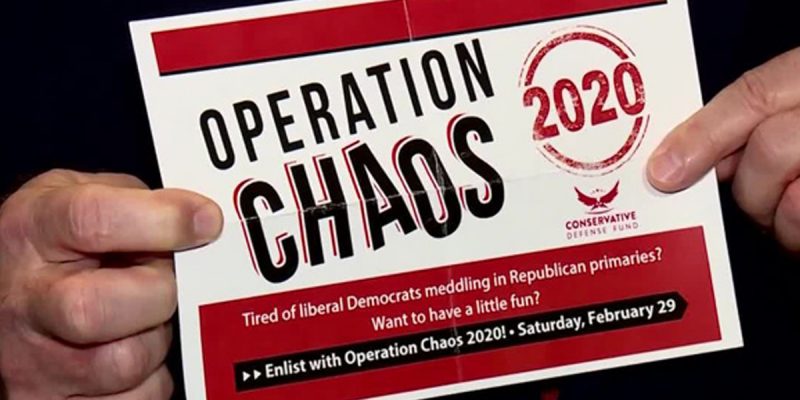 You’ve probably heard by now that Mike Bloomberg, whose short campaign converted a high stack of cash into diminutive results on Super Tuesday, has now declared he’s cutting his losses.

There’s so much we can do with this. So much.

But rather than clown on Bloomberg, we want to address something which has been brought to our attention a couple of times this morning in the wake of Joe Biden’s sudden Lazarusian return to viability as a presidential candidate after the collapse of Amy Klobuchar, Liz Warren, Pete Buttigieg and Bloomberg as the so-called “moderate” – so called because none are avowed communists like Bernie Sanders is – alternatives to a half-dead gaffe machine who upon the greatest night of his political career failed to distinguish between his wife and his sister.

Namely, should Republican voters with not much to do given no serious competition for President Trump in their own party’s primary contests be meddling on the Democrat side?

Earlier this year there was quite a bit of talk in South Carolina about an “Operation Chaos” initiative, in which Republicans would turn out for Sanders so as to contribute to the rolling disaster that is the Democrats’ nomination process. That didn’t really work, as Biden walked away with a victory in that state. Then yesterday, Biden wiped the floor with Sanders, whose voters began to realize their man has no real shot at the nomination (he never did because he doesn’t deserve it; after all, he isn’t a Democrat and never has been one) and didn’t bother to turn out where he needed them to.

Which means, particularly now that the Bloomberg is off the rose, Biden is in a position to consolidate the black vote and the party establishment vote behind him. If he does that, the wild scene of a brokered convention in Milwaukee is off the table barring some development, not entirely unforeseeable, regarding Biden’s health. It’s more than a little obvious there are neurological issues surrounding Biden – whether Alzheimer’s Disease or ordinary dementia. He can’t give a speech without devolving into gobbledygook and he commonly forgets where he is.

But there were issues surrounding Hillary Clinton’s health in 2016, and those didn’t prevent the Democrats from throwing in behind her. Biden would have to manifest something a lot worse than falling and dizzy spells to keep him out of the nomination.

So does an Operation Chaos move, in which Republicans jump in to keep Biden from getting the 1,991 delegates he needs to secure the nomination before the convention, make sense?

Here’s the thing. That kind of meddling is better in theory than in practice. It’s only really useful when a small number of votes can turn the result. And right now, that’s questionable.

Particularly here in Louisiana, where the majority of Democrat voter registration is black. In fact, out of the 1,253,506 registered Democrats in the Sportsman’s Paradise, black voters outnumber whites 720,664 to 485,540, making black voters 57.5 percent of the Democrat electorate in the state. The Democrat primary in Louisiana will go to whomever is able to mobilize the black vote in the state. That isn’t going to be Bernie Sanders, who only got 23 percent of the vote in the Louisiana primary in 2016 (Clinton got 71 percent). There was a chance Bloomberg, who had bought up a few of the state’s black mayors like Adrian Perkins in Shreveort and Jeff Hall in Alexandria, along with a few of its consultants like Ryan Berni and Richard Carbo (and too bad for them that the Little King’s coin has run out), might have become a factor; Bloomberg might have been a viable Operation Chaos vote in Louisiana.

But Bernie is a wasted vote. Biden will certainly win Louisiana’s primary. Don’t forget that Biden’s chairman in Louisiana is U.S. Rep. Cedric Richmond, who is essentially the Grand Poo-Bah of the state’s black politicians and the go-to guy for black voter turnout.

Which means that while we love the spirit behind an Operation Chaos to keep the Democrats’ donnybrook alive, the practicalities of it, at least in states like Louisiana where black voters decide elections on the Democrat side, don’t work.

We would imagine there will be plenty enough chaos to come, but its source will be a mounting recognition that the Not Bernie candidate the Democrats have settled on is a punch-drunk old man whose faculties are long gone and who is essentially Walter Mondale. That isn’t the beautiful disaster a brokered convention full of violent Bernie Bros, but it’ll have to do.