You’ll notice we’re saying COLLECTING the dots here, not CONNECTING them. What we’re offering below is a string of events brought to us by others, as there is a bit of suspicion among legislators and observers of events at the Louisiana State Capitol that all is not what it seems where Gov. John Bel Edwards’ management of the Wuhan virus outbreak in Louisiana is concerned.

We touched on some of this Friday, in noting there are some considerable inconsistencies and a distinct lack of transparency with respect to the numbers Edwards is putting out on virus cases and deaths. Most notable in those numbers are the latter – as of yesterday Edwards is reporting 239 deaths among 5,237 cases, which is an astonishingly high 4.6 percent death rate. Nationally, there are 4,095 deaths in 189,661 cases, which is only a 2.2 percent death rate. Louisiana is a clear outlier in the number of deaths being reported from the Wuhan virus, and anecdotal evidence has begun to surface that the death rate has been inflated. There was the case of 17-year-old Jaquan Anderson, who tested positive for the virus and then died of what his father called heart failure, but was listed as a coronavirus death by the state.

Which doesn’t prove anything, obviously, but it does cast a bit of suspicion on those death totals. Just more dots we’re collecting.

Further, there is the question of when the statistics of virus deaths are being released. We’ll get to that in a bit.

Let’s remember something which can’t be forgotten here while we’re collecting dots, which is that John Bel Edwards has built his political career on lies and fearmongering. He ran for governor in 2015 on an ironclad pledge that he wouldn’t raise taxes, and no sooner was he elected than he “discovered” the state’s budget was in a massive hole which could only be fixed with a billion dollars in additional revenue – which was a surprise to the people who had seen him as a state legislator for the previous eight years frequently voting for the state budgets he was now calling untenable, budgets that for the previous couple of years he had negotiated as the head of the state’s Democrat delegation in the House.

Then, as a means of strengthening his demand for tax increases Edwards threatened to shut down college football in the state.

Following that, when his full-cent sales tax hike came up for renewal two years later Edwards declared the state was in a billion-dollar hole. That wasn’t true, either – he settled for less than half the renewal he sought, and no arm of state government suffered for it. But that didn’t stop Edwards from sending out eviction notices to seniors in nursing homes as a means of pressuring Republican legislators and fearmongering in order to generate nasty phone calls to his opposition.

So when John Bel Edwards takes to a podium and spouts numbers of virus cases and deaths there is very little reason to believe what he says. We find ourselves in a position to be allowing a known liar to shut our daily lives down on the basis of statistics he controls and manipulates.

And meanwhile there’s a timeline some of the capitol crowd have begun noticing.

When was the first “confirmed” Wuhan virus case in Louisiana? That was March 9. Guess what else happened on March 9?

That was the day Louisiana’s legislative session opened. For months everybody has known that the most conservative legislature in Louisiana’s history was going to make for the most difficult session for a governor in the modern history of the state, and Edwards was likely to have to swallow a tort reform bill passed with a veto-proof majority, plus have less input on the state’s budget than any governor has had in a long time around here.

Which isn’t to say there weren’t any coronavirus cases in the state. In fact, people in New Orleans had been complaining of Wuhan virus-like symptoms for a good couple of months before March 9.

As the coronavirus panic grew, the initial reaction by the legislative leadership was to hold the session, with precautions. Edwards proceeded to ramp up pressure on them until, a week later, they agreed to recess the session for two weeks. Edwards said the legislators were putting people’s lives in danger by meeting.

The two-week recess ended and the Legislature went back to the Capitol yesterday, to gavel in and gavel out. But the day before they did, Rodney Lyons, a black Democrat from the Westbank in New Orleans, announced he’d had the virus and had quarantined himself; Lyons said he’s fine now. But Ted James, another black Democrat from Baton Rouge, announced he’d been hospitalized with the virus. James didn’t supply any pictures or other proof, nor did he identify what hospital he went to.

He did say this: “I hope my constituents  and the people of Louisiana look at my experience and understand that this virus does not know age, race, health or socioeconomic status.”

James said he went to the hospital on Sunday. March 29. He said he’d tested positive for the virus on Thursday, March 26 and had symptoms before that.

OK, fine. What was this doing on his Facebook March 27?

Which brings us to yesterday when the Legislature was collecting to gavel in and out. Yesterday Edwards announced 54 Wuhan virus deaths, far and away the largest number yet. He says it’s Louisiana’s “deadliest” day,

Only the Democrats in the legislature were wearing masks yesterday, by the way.

And here was the visual which ended up in the newspapers… 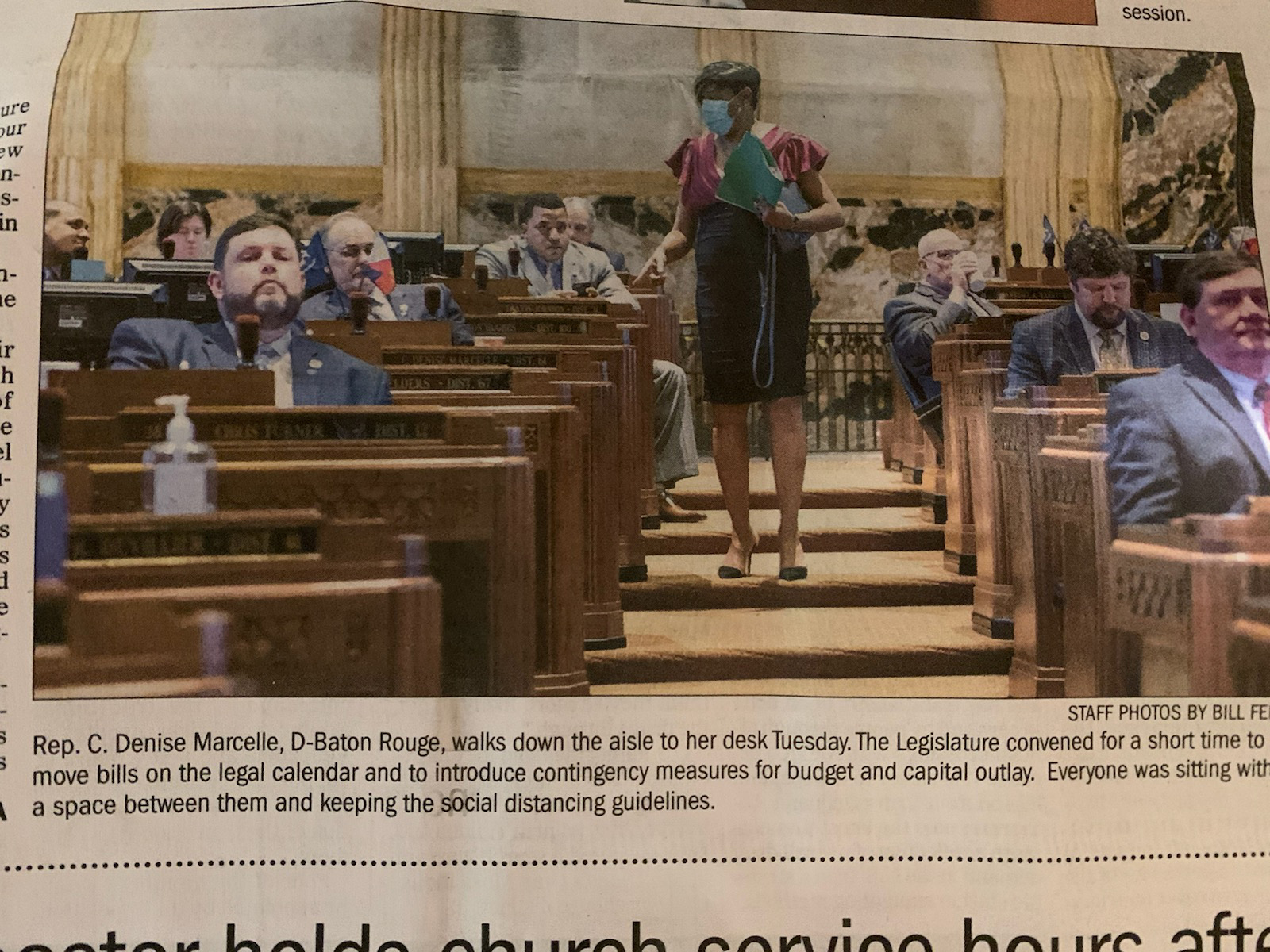 That’s Denise Marcelle, and she either doesn’t understand the six-foot rule or she’s not clear on how far away six feet is.

Could all of these events and their timeline be the product of coincidence? Sure.

But could they be dots someone could connect and detect the presence of an agenda? Yes, they could.

We’re just collecting these dots. There are others connecting them, and concluding at least part of what’s going on is Edwards attempting to keep that legislature from making substantive policy changes he doesn’t want made. Right now he has more power than any governor in the history of the state – even more than Huey Long had during his years as essentially a dictator in Louisiana. And yet Edwards won re-election with only 51 percent of the vote and he’s saddled with a legislature which couldn’t be any more opposed to his ideological agenda.

Nobody here is saying the virus isn’t a serious problem. But is advantage being taken, and is the will of the people being put aside? Are we being manipulated?

There are no definitive answers on those questions yet. But they ought to be asked, because Edwards lacks the credibility a governor with this much power and control over our daily lives ought to have.

Interested in more news from Louisiana? We've got you covered! See More Louisiana News
Previous Article PREMONITION FROM THE ’80s: “Donald J Trump Will Lead America Back to God”
Next Article SADOW: Will Facebook Cushion The Advocate From Its Decline?