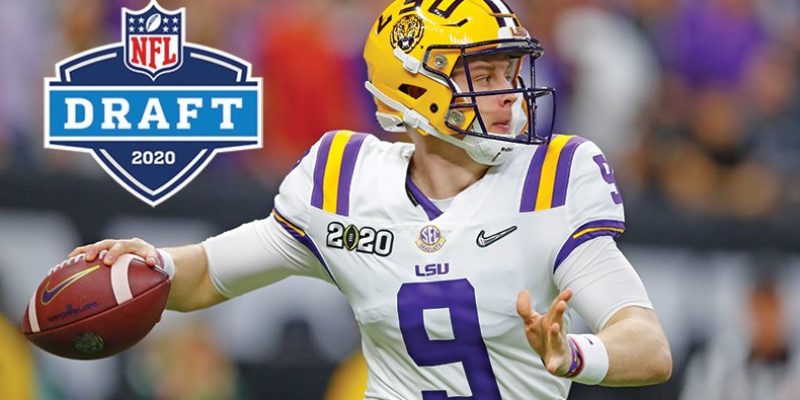 It was a banner season, the perfect season, that may seem like an eternity ago now that the coronavirus health and political hysteria has hit our country and our world.

Sports in general was brought to an immediate halt, and it is hard to believe that that January 13 LSU victory over Clemson was a mere nine days before Senator Tom Cotton’s warning and 18 days before President Trump’s shutdown of air travel from China.

Everything has changed, let’s hope only temporarily. Not many folks are really concerned about LSU football as we try to navigate our personal philosophies and the evils working against us behind the scenes.

But for one last time, all Tiger fans should come up from this twilight zone to take notice. This NFL Draft beginning tonight could be record-breaking for the title-winners from Baton Rouge.

It will be nice to watch something that, in the grand scheme of things, isn’t nearly as important, obviously, as the current world crisis.

As muddled in embarrassment as our state has been, and even though the world of sports can’t fix corruption in politics and its effects on Louisiana residents, for just one night, we as LSU fans and fans of this great state can follow a potential story that has never before happened.

The 2004 Miami Hurricanes currently hold the record for most first round draft picks in an NFL Draft. The 2019 LSU Tiger program, by night’s end, could either join them or surpass them, and the chances of it happening are quite good.

To be fair, Alabama also has the opportunity, so that may be a story a college football fan in general follows as well. But for today, in this piece, we are dedicated to the Tigers. That Bama shadow was exorcised a long time ago now.

The current LSU record for first round picks is four, set in the 2007 draft, when another Tiger quarterback was picked first overall–JaMarcus Russell to the Oakland Raiders. One major difference in that draft was that only one other player was picked in the subsequent rounds, whereas the 2020 will likely see 14 Tigers drafted total.

That first round school record is almost assured to be broken tonight. And we can also hope that Joe Burrow’s career takes a slightly different trajectory than Russell’s.

There are dozens of mock drafts out there, with some of course being more respected than others. But when they are taken as a total, there are a staggering seven players who have been projected as a first round draft pick. If that were to happen, it would mean 22% of the first round would be made up of LSU players.

Of course this is a longshot. But so was a 15-0 championship season that had Tigers sweeping major award after major award and shattering records all over the books. In this time of fear, boredom, anger, and frustration for many people, it is the perfect time to hope in longshots. Tiger fans hoped in miracles all year. And they should remember how fun that was tonight.

Here are the men from the purple and gold that fans can root for one final time. Most of the numbers are clear enough. The first ratio shown is the number of first round mocks over total mocks.

LSU IN THE FIRST ROUND 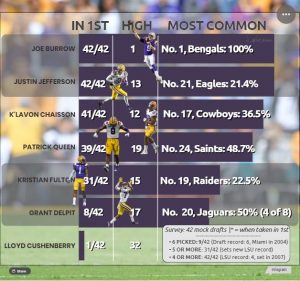 Moreover, the 2001 Miami program is in the discussion for greatest college football team of all time, a distinction the 2019 LSU team joined. But part of the legitimacy of a team’s claim for “the greatest” is how their players fare in the draft, not only after the great season in question, but in the following years as well. 2001 Miami is at the top of many people’s lists, in other words, because of that 2004 draft. Only time can determine that judgment, but for the record, Miami had 15 players drafted in the first round from 2002 to 2004.

Sixteen years later, tonight, in an NFL Draft that will look very different from years past, LSU can put a huge dent in that number.