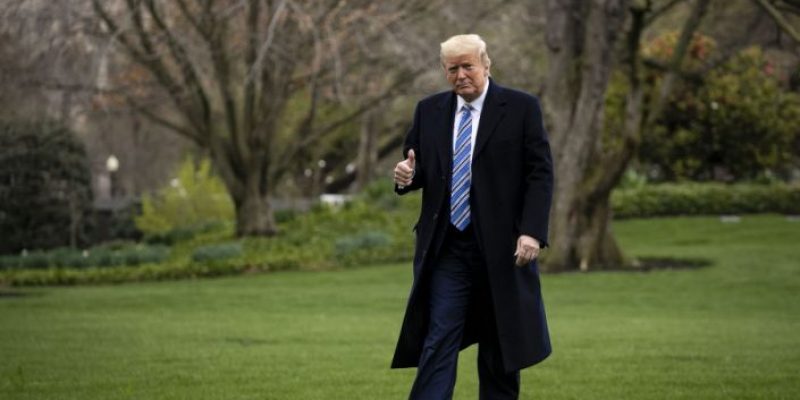 Still, in the midst of this COVID-19 crisis, it is good to check in on how the President is doing in the polls. The latest Gallup has his approval rating at the highest it’s ever been–at 49%. While Republicans’ opinion of Trump was flat—an indication that it has already topped out—approval by independents rose by eight percentage points from early March, while Democratic approval was up six percentage points.

The Democratic spike was called by Gallup as being “highly unusual for Trump.”

In an article written by The Hayride‘s Matt Howerton, he shows that 61% of the country approves of Trump’s handling of the pandemic itself.

“I think he’s handled it pretty well,” said Justin Penn, a 40-year-old independent voter who said he previously favored Joe Biden. “I think he’s tried to keep people calm. I know some people don’t think he’s taking it seriously, but I think he’s doing the best with the information he had.”

Indeed, I said as much in an article over the weekend, concerning Nancy Pelosi and others’ incessant attacks on Trump:

No, President Trump was perfectly and understandably human for saying the things he said in the beginning of this chapter of history. Dare I say, that he was also Presidential. Who wants a President who is going to jump the gun and start talking about shutting society down with mandatory quarantines at the first sniff of any disease?

Penn, who did not vote for Trump in 2016, is now reconsidering his stance going into the 2020 election.

Given the pandemic, Trump has naturally been dominating the television. Polling experts say this is probably one major reason that has influenced voters.

“There are people who haven’t even heard Trump that much, while the rest of us have been obsessed,” said Matt Grossmann, director of the Institute for Public Policy and Social Research at Michigan State University. “Those people are paying attention and seeing Trump a lot.”

To date, the coronavirus has sickened more than 150,000 people and shut down most of the country. Trump stated yesterday that the worst is coming over the next few weeks, and that we should brace for it. Even though this Gallup poll came out last week, before the President’s press conference yesterday, it is this type of solid direction and honest leadership that is likely to win the approval of more and more citizens now just tuning in to their television sets.

Because the quarantine has perhaps forced them to.

Grossman and others may see this spike, aided by people who don’t normally tune into politics, as a somewhat neutral observation, perhaps even something not to put much stock into. They may think this, assuming that once life gets back to normal and people not typically interested in politics aren’t tuning in anymore, the numbers will drop again.

This could be true, yes.

But there is another possibility altogether, one that could see the President’s numbers continue to climb. This is a healthy thing for our country, as the U.S. has become so polarized in politics, often turning a blind eye to truth and reality even when their respective party is in the wrong. Fresh blood and new eyes could mean that more people will more fairly assess the President instead of thoughtlessly following an already set opinion. And for those of us–Democrat, Republican, or Independent–who try to give the man a fair shake, that is refreshing news indeed.