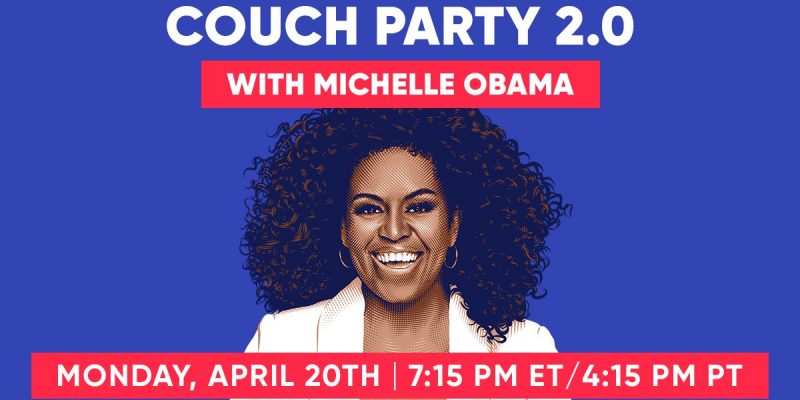 According to Fox News, First Lady Michelle Obama is in talks with the Joe Biden presidential campaign about earning her endorsement and involvement.

We previously reported that Joe Biden publicly stated last year that Michelle Obama “would be a great Vice President.”

Speculation has continued to grow due to three developments:

The Biden campaign provided a glowing statement about Michelle to The Hill saying,

“We know what pretty much everyone in America does: Michelle Obama is probably the most beloved member of the Democratic Party and her support is a big deal. Any future announcement would reflect the incredible impact her voice has.”

The former First Lady appears to be investing time in her public image by hosting a story-time reading show for kids every Monday on PBS which just received $75 million through the stimulus package.

She also appeared alongside First Lady Laura Bush last night during the World Health Organization’s “Global Citizen Initiative” online-concert to raise funds for the WHO.

Michelle Obama is also hosting an online show this evening with guests Tom Hanks and Rita Wilson entitled “Couch Party 2.0”. Tweets for the event encourage supporters to “sign up” and submit their personal contact info to the website of “When We All Vote”. Obama writes,

“I’m counting on all of you to help make sure everyone in this country knows how to register and vote safely in the 2020 elections.“

The website names Michelle as one of a dozen “co-chairs”. Top Obama adviser Valerie Jarrett serves on the board. The “non-profit” organization appears to be a massive voter registration and mobilization tool for national Democrats while walking the tight-rope of non-partisanship to maintain their 501(c)3 status.

Obama and the organization are joining Democrats’ calls for large-scale mail-in voting this November, a move that would completely change the makeup of the presidential electorate. President Trump has voiced his opposition to the proposal citing voter fraud concerns.

Currently, only 5 states have an all-mail election system: Colorado, Hawaii, Oregon, Washington and Utah none of which are particularly competitive.