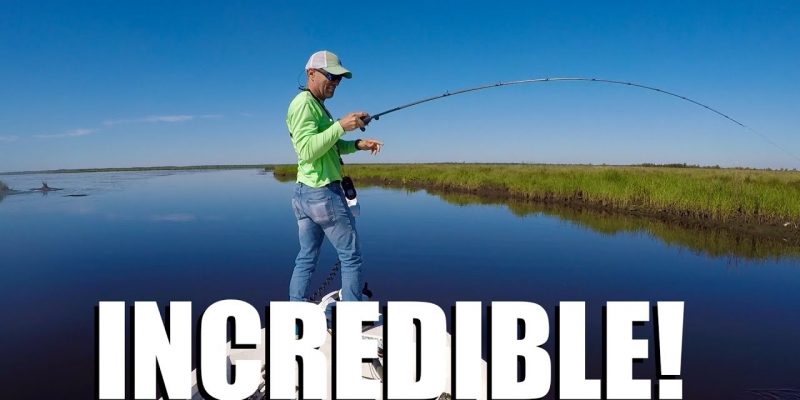 I should have known the day was going to be far from average when I nearly froze to death while running my boat over the tabletop-flat inky water during the predawn of a May morning. Oh, and I was wearing a sweatshirt.

Although the day quickly warmed, chilly boat rides in May occur on the Great Lakes, not in the South Louisiana marsh. That should have been my clue I would have seen things I’d never before laid eyes on in nearly a half century fishing the tattered fringe of the Bayou State.

My first stop produced a handful of fish, but the action wasn’t enough to keep me in the area, so I made a bit of a move, and found a bayou that drained a large pond that was so shallow, it was completely dry on the low tide.

The action was really good in this bayou, thanks in part to spectacular water clarity that allowed me to see clear to the clamshell-speckled bottom.

I was scanning for redfish when I saw something move almost directly under my boat that was what the world-record redfish must have looked like — but only if it was green and had razor-sharp teeth. It was an alligator hugging the bottom that moved leisurely away from my trolling motor as if only slightly annoyed at the intrusion.

I’ve seen plenty of gators over my years of fishing, but never one that was glued to the bottom directly under where I was fishing.

I watched him for a while before moving on with the task at hand. Not too long after, I heard a roar in the distance, and looked up to see two bombers and two fighter jets flying right at me. They banked on the outer edge of the pond and turned north. I felt like I should have been warming up to throw out the first pitch, but later, I would discover it was a flyover that had been scheduled to honor healthcare workers in the greater New Orleans area.

Only moments later, I happened upon a massive school of what I suspect were largemouth bass fry. As I stared at the tiny fish, amazed at how they all moved in synchronous motion as if a single unit, a sheepshead darted in and munched on a few of them. Nature is exceedingly cruel, especially to infants.

The best part of the days was I got all three encounters on video. Check out the latest episode of Marsh Man Masson below.