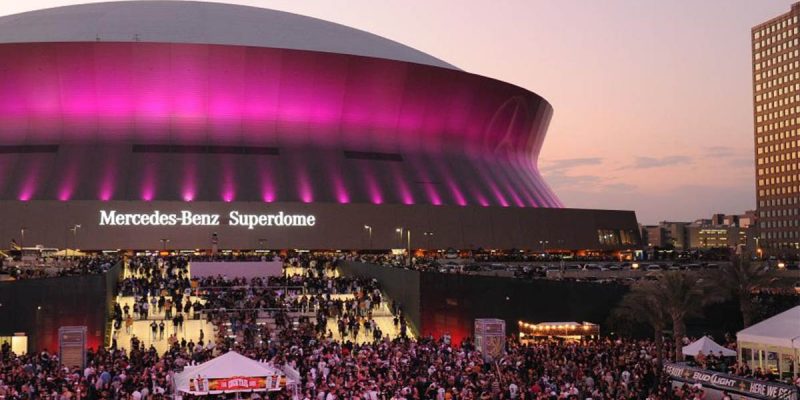 Mercedes-Benz’ 10-year contract with the Dome is worth $60 million, but the German automaker also bought the naming rights to the new stadium in Atlanta – and they’re sticking with that facility as their showpiece. The Superdome, which is still one of the better sports facilities around despite its pushing half a century of use – it’s been renovated several times, is currently in the middle of a $450 million renovation, and looks better than ever – just doesn’t have the cache’ of a new stadium.

But that isn’t the real reason Mercedes is hitting the gas away from the corner of Poydras and LaSalle. The real reason is New Orleans. Corporate entities don’t want to be associated with the city anymore.

Next door to the Superdome is Smoothie King Arena, where the Pelicans play. Smoothie King picked up its corporate headquarters and left for Dallas last year. They were done with New Orleans. Nobody expects them to renew their naming-rights contract with the arena when it expires.

And that was before the city’s mayor LaToya Cantrell canceled all large events for the rest of the year because of the coronavirus, which by the way has all but stopped killing people in the New Orleans area, per the state’s numbers – earlier this week there were three straight days with no deaths reported and then on Wednesday there were six.

The city’s tourist economy, though, is completely dead. Cantrell is at war with the head of its convention and visitor’s bureau, and she’s also at war with the head of the Chamber of Commerce in Jefferson Parish. There is no indication whatsoever that either feud will be resolved anytime soon or that Cantrell will relent on getting the tourist economy back going. She’s even talked about canceling Mardi Gras NEXT YEAR.

Cantrell is talking about letting the Saints play in an empty Superdome this year, which would hamstring the best home-field advantage in the NFL for Drew Brees’ final season. That shows evidence of the same mentality which expects restaurants to reopen when they’re only allowed to fill 25 percent of their tables, something which many of them have rejected as a waste of time.

And she’s touting her shutdown as a means of making New Orleans a world leader in…you wouldn’t believe it if we say it, so we’ll quote her…

“I want to send the message nationally, internationally… that we have been doing the right thing,” Cantrell said. “We are showing, yet again, that we are the safest city to visit and live, and that is what is going to allow our industry to rebound.”

As if anybody, ever, traveled to New Orleans in pursuit of safety. That’s what Disney World is for, moron.

Under those circumstances, trying to sell the naming rights for the Superdome couldn’t be more difficult. The Stripchat people are offering 25 cents on the dollar from what Mercedes-Benz paid, and based on what Cantrell is doing to the restaurants that seems like a fair price.

Whether they actually have the money for the check to clear is a good question.

Our idea was for Zatarain’s to buy the naming rights, and for the Superdome’s roof to be repainted to look like an open gumbo pot. But even that might not be a good investment anymore with that city’s current leadership.