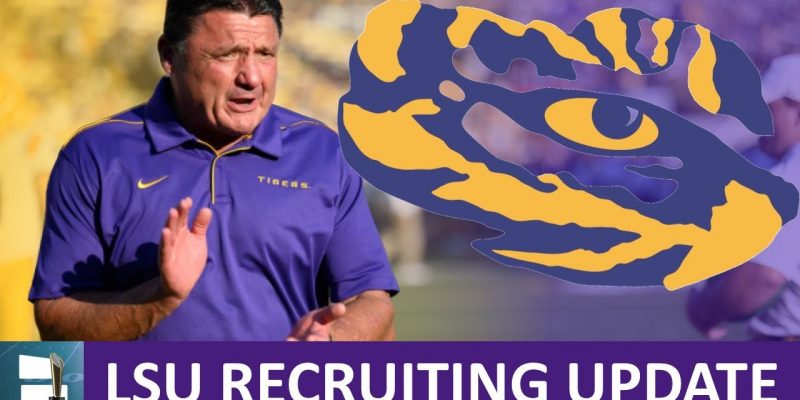 The LSU football team continued to rise in the national recruiting rankings when massive in-state target Saivion Jones called head coach Ed Orgeron to inform him of his plans for his collegiate career.

“LSU was the school for me because they made me feel at home most,” Jones said. “They got a great coaching staff, great facility, and it was just a great school to pick.”

The 6-5, 245-pounder out of St James is a four-star prospect and the No. 11 weak-side defensive end in the country. He made a huge leap in the new Top247 player rankings on Wednesday, moving from the nation’s No. 194 overall player to No. 154. As a junior, he posted 103 tackles with 17 of those for loss, 13 sacks, 25 quarterback hurries, and two forced fumbles.

Check out SI Country’s film study of Jones here and prepared to be wowed.

Jones is currently the No. 8 player in the state of Louisiana, earning LHSAA Class 3A MVP honors and helping the Wildcats to their first state title since 1979 with a 15-0 record last year.

Needless to say, the LSU coaching staff was ecstatic to land Jones’ commitment.

“They were pretty hyped up, and they wanted to get on the phone. When I’m over there, I just feel like I’m at home. My family is very excited.”

Jones spoke specifically about how special Coach Orgeron is.

“He played a big role, and I think Coach O is an awesome coach,” Jones said. “I like the energy he pulls out and how he cares for the players not only on the field, but also off the field.”

In addition to Coach O and the coaching staff, Jones said he just felt at home at LSU, despite being impressed with the Tigers’ magical run in 2019.

“That’s something you can’t get better than. 15-0 and the national championship—that’s amazing,” he said. “It didn’t play a huge role, though. It was more about how it affects my family, and I just feel like it was the best choice.”

247Sports recruiting analyst Gabe Brooks added that, with his next-level athleticism, he’s got a chance to star on Sundays when his time is up at LSU.

“You absolutely have to be encouraged by Saivion Jones’ overall athletic profile,” Brooks said. “He’s in the 6-foot-5, 245-pound range, his tape made the requisite jump from sophomore to junior seasons, and he competes in multiple track and field events: shot put, discus, and believe or not, high jump. That multi-sport participation for a player of his size gives you plenty of hope for his long-term ceiling.”

Jones’ commitment gives the Tigers a total of 12 for the 2021 recruiting cycle. They now own the No. 6 overall class in the country on the 247Sports composite team recruiting rankings.

Interested in more news from Louisiana? We've got you covered! See More Louisiana News
Previous Article Optimism Or Cautiousness? Cuts Of 5% Ordered, Excludes Most Of Texas Budget
Next Article Maybe Turning It Into The Porn-Dome Will Be New Orleans’ Best Option