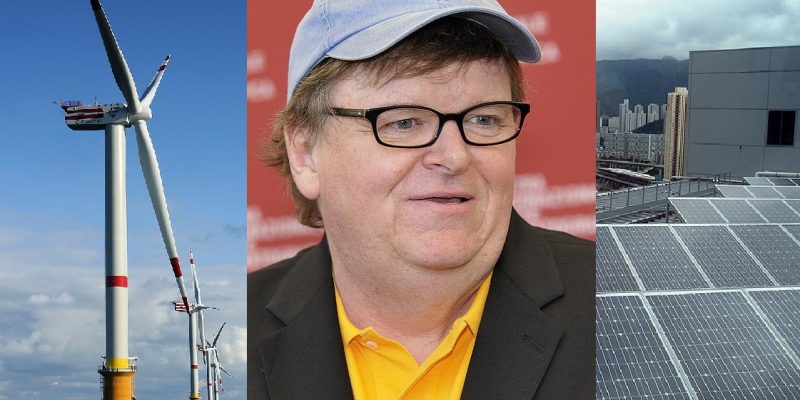 Unlike most of Michael Moore’s productions however, this particular documentary was not actually directed by Moore himself who only acted as one of the producers and allowed his name to be prominently used to garner as much publicity as possible. The documentary’s creative director was ultimately done by Jeff Gibbs.

The running theme of the documentary states that green energy either relies heavily on fossil fuels, the destruction of the environment to mine for the raw Rare Earth Minerals, or a combination of both. The documentary illustrates that electric powered cars for the most part are charged on power-grids that are energized by coal power plants. They might as well be called coal powered cars.  Solar panels require destructive mining of the Earth to harvest the minerals needed for production, and wind farms often require the destruction of whole forests to create enough unobstructed land to generate electricity.

Both solar and wind generators have both a limited shelf life of operation on top of which produce power inconsistently. Calm days no wind power, cloudy days reduced solar power and none whatsoever at night. Even the solar plants that use mirrors to heat water require an alternative source of power such as a natural gas generator to get the plant running in the morning. Also according to the documentary none of these sources have energy have produced enough “green energy” to offset the energy required to build the power plants in the first place and in fact may require more fossil fuel consumption than if used directly such as in coal or natural gas plants.

The biggest offender of all according to the documentary is the bio-mass power plant. Gibbs spend at least one quarter of the movie’s runtime criticizing these bio-mass plants. He stated that these plants essentially burn down entire forests for fuel. Gibbs also stated that also require used tire rubber to get the fire temperature high enough to create the necessary amount of steam to effectively generate electricity and the plants are not economically viable.

It is the economic argument that puts Gibbs and Moore on the same side of the argument as conservatives such as Former Austin City Council member and current Texas Senate District 14 candidate Don Zimmerman. When Zimmerman was on the City Council he was the most outspoken critic of the city investing in and eventually purchasing a bio-mass power plant in Nacogdoches for $470 million in debt to the Austin taxpayers on to of  which costs the City of Austin more to operate than keep shut down.

This is where the agreements end because Gibbs and Moore also blame capitalism for the white elephant of “green energy” The problem is the word “capitalism” has been used to describe a lot of things that are not free market capitalism, such as crony capitalism and even worse public private partnerships which no bid contracts are sent to friends of elected officials and paid off with taxpayer money. This seems to be a more common occurrence with big public works projects which also include sports stadiums

This is the part Moore gets dead wrong, and Moore has had a history of embellishing if not outright making up facts to support his narrative. While it’s been documented in the past conservatives have been huge critics of Moore, In fact those that have liberal views have in the past also been critical of Moore’s interpretation of history. The most prominent example was “Manufactured Dissent,” a documentary that was partially funded by Canada’s “City TV” and produced by a bunch of progressives that pointed out Moore was making up facts going back to his first documentary “Roger and Me” including lying about not getting interviews with then GM CEO Roger Smith when in fact Smith granted several interviews to Moore.

Manufactured Dissent even premiered at SXSW 2007 but seems to get very little if any traction after that. Moore continued to create documentary and reports of controversy surrounding Moore including potentially going along with Disney covering up the real reason why they parted with the Weinsteins in 2004. But only when Moore produced a documentary which picked apart the pseudo science surrounding the green energy movement, and showing the money trail to those that profited off of it which included Al Gore, was Moore finally thrown under the bus.

This shows more than anything else the cult that is the green energy movement. Any bit of science and facts that contradict the narrative and shunned and those that are the messengers and publicly chastised such as calling Planet of the Humans a “full fronted assault on our Sacred Cows.” Even someone as far left progressive isn’t immune from this. There is too much money involved by the players pushing this pseudo-science to sit idly by.  Then again maybe this will finally be the chink in the armor of Michael Moore.  Either way it’s fun to watch the progressives eat their own.