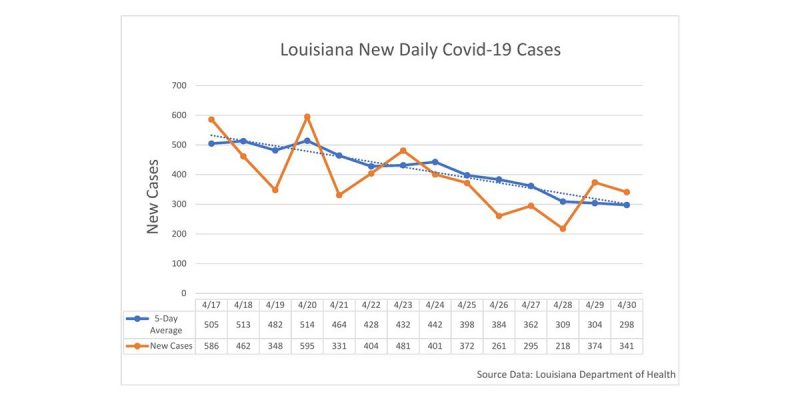 Louisiana should be entering Phase 1 of the President’s reopening plan. Instead, Governor Edwards unilaterally decided to again delay reopening Louisiana. His actions unnecessarily restrict our freedom and put our livelihoods at further risk of collapse. He claims we did not meet the criteria established by the White House, specifically the rate of new Covid-19 cases over the last 14-days did not decrease and we lacked adequate testing capacity. Both claims are false, but in today’s world, there is no opportunity to challenge them.

The Phase 1 criteria require only a “downward trajectory of documented cases.” Based on the data from the Department of Health, new daily Covid-19 cases have fallen 40% over the past 14 days. The Governor tries to hide this fact by focusing on specific regions, while at the same time saying a regional approach is not feasible. Instead of a sensible, region-specific opening, the Governor made up his own criteria to keep the entire state closed.

According to Johns Hopkins, Louisiana also has the 4th highest testing per capita in the country, meaning we absolutely have enough tests to cover “at-risk healthcare workers.” Our hospitals are laying off staff, so clearly are not overwhelmed. The facts clearly show that Louisiana meets the necessary criteria to move forward.

The Governor can disregard the White House and CDC recommendations if he chooses, but he cannot say he is following them to keep Louisiana closed. He is entitled to his own opinions, but not his own facts. With the lives of 4.7 million people on the line, we should not accept that 2+2=5. Some might say it is only two more weeks without reopening the state, but in reality, we are boiling the frog. For the people of this state struggling to pay the bills for their families and businesses, two weeks is an eternity.

The Governor’s own lawyer, in justifying the continued lockdown, said that 10,000 people were infected during the current stay at home order and any one of them could re-infect the state. Both parts of his statement validate the obvious truth: the lockdown will not eliminate the virus, and we are unjustifiably delaying the inevitable. Considering this is the Governor’s mentality, how long will we stay shut down or how quickly will we close again when cases rise? May 15th may be another broken promise.

A system of separation of powers with checks and balances is a fundamental American principle. Yet, when we need it most, we have none. We need to tell the Governor that he cannot just ignore the people and their representatives. I will keep fighting because I do not want a single citizen to lose their job, their business, or their lives because of the will of one man.