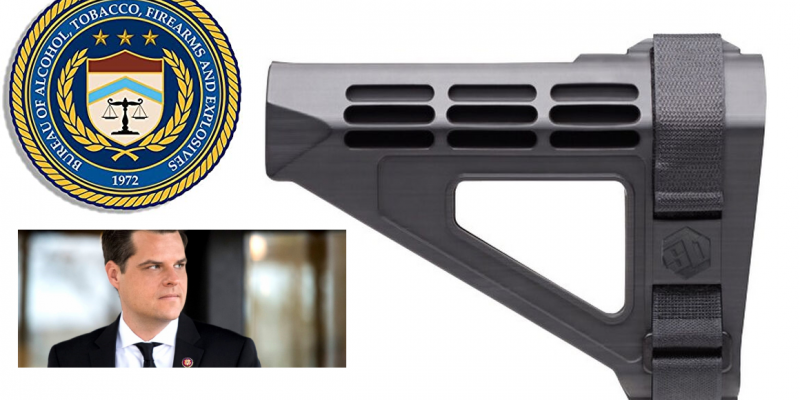 Compact and short-barreled firearms got some serious competition around 2012 when the pistol brace was introduced.
Offering similar functionality to a short-barreled rifle, but without the required federal paperwork, braces have taken off in popularity. They have been especially popular among disabled shooting sports enthusiasts as well as wounded veterans looking for a way to fire AR pistols while maintaining enough stability to compete.
While the Bureau of Alcohol Tobacco and Firearms has been back-and-forth on the issue of braces that function as temporary buttstocks,  a Florida Congressman noted this week that the bureau may be inching toward adding more regulations soon.
U.S. Rep. Matt Gaetz announced on his podcast “Hot Takes with Matt Gaetz” the ATF is crafting new rules concerning pistol braces. Gaetz said he and six of his congressional colleagues have sent a letter to the acting ATF director, Regina Lombardo, and Atty. Gen. William Barr demanding ATF refrain from drafting the rules without Congressional purview.
“We understand that ATF is currently considering restricting one arm brace model owned by over 700,000 Americans,” Gaetz said. “We strongly urge ATF to cease taking any actions and reconsider or rescind any secret determinations which call into question the legality of firearms owned by millions of law-abiding Americans.”
Gaetz noted that while President Donald Trump has been conservative on many Second Amendment issues, he has made it “more difficult to acquire things that shooters need and gun owners need, for safety and for the unique circumstances that an individual may have.”
As one example, the Trump Administration banned “bump stocks” in 2019, answering a swell of criticism of AR-15 and similar semiautomatic firearms.
“But now, what we find, is that the ATF is making it very difficult for people to have arm braces. They’re changing standards and changing rules,” Gaetz said. “And I am particularly frustrated when our government, at the administrative and executive level, goes beyond their grant of authority in our Constitution and in our Federal Statutes. Nothing gives anyone at ATF the ability to constrain the use of arm braces.”
Gaetz said a ban on pistol braces would stifle innovation in the firearms manufacturing industry as well as penalize gun owners.
This is not the first time the ATF has waded into the subject of braces. Last year, the bureau issued a letter clarifying a 2017 administrative rules change that the overall length of a firearm must be measured with the brace folded (or to the end of the brace’s receiver extension if stationary or fixed).
ATF has maintained for years that 26 inches is the maximum length for a concealable firearm. Barrels, according to ATF’s rules, must be shorter than 16 inches with a buttstock or it falls under the National Firearms Act (NFA) restrictions for automatic guns. Without a buttstock, an AR-15 pistol (for example) may have any barrel-length.
The introduction of the pistol brace in 2012 created a loophole in the law — being not necessarily a buttstock but at the same time functioning as one. When Sig Sauer unveiled their new SB15 Pistol Stabilizing Brace, it was intended to be strapped around the forearm, improving stability when firing. Many pistol owners saw an opportunity to instead use the brace like a stock, pressing it up into the shoulder and using it as a cheek rest like with a rifle.
This led to a string of ATF rulings. In 2014, ATF nixed “shouldering braces,” arguing a brace effectively turns a pistol into a short barreled rifle. The bureau doubled down in 2015 at the end of the Barack Obama presidency, clarifying “illegal shouldering.”
At the onset of the Trump Administration, however, the ATF reversed much of its stance and allowed for the use of braces in “situational,” “sporadic,” and “incidental” uses.
From the hip: Gaetz, the 38-year-old, two-term Congressman for Florida’s 1st Congressional District, represents much of the reliably conservative Florida panhandle area. That means many of his constituents are firearm aficionados, and he voices their concerns well.
If Gaetz and his colleagues are correct, the ATF is in the process of cracking down on the expanding popularity of using pistol braces to turn concealable semi-auto guns into temporary rifles without having to render the proper federal paperwork under the NFA.
We can expect ATF to continue to waver on the issue. We can also expect that Gaetz’s colleagues in a Democratic-controlled House will not vote anytime soon to rein in the ATF or stabilize the industry. For now, and at least through the end of the 2020 election cycle, any changes will stem from the ATF or from the White House.
However, Gaetz’s bully pulpit can help to organize gun owners against ATF’s move and pressure the White House to stay away from bolstering any crusade against pistol braces a la the bump stock ban. Keep an eye on this.
In the meantime, the DIY gun building forum 80 Lower Jig has some helpful advice given ATF’s wavering position on the matter.

“… There’s one big caveat: Don’t show it off. Including the words “incidental”, “sporadic”, and “situational” when saying shouldering a brace is legal is the ATF’s way of backing off the issue without just saying “yes, it’s legal, go for it.” Using such language is the ATF’s way of trying to sway gun owners from doing this utterly harmless task consistently in order to satisfy the complaints from uninformed anti-gun politicians. So, you can do it. But in the strange, small chance you’re standing in front of a zealous ATF agent at your local gun range, we don’t recommend you do it consistently. Only occasionally.”