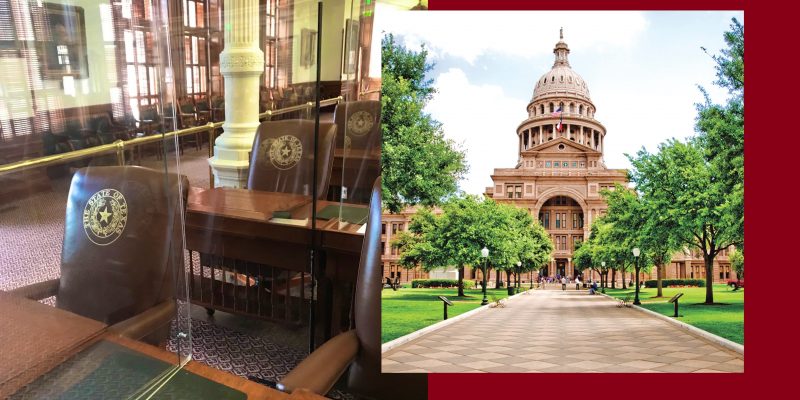 Two days after the Texas Department of Public Safety announced it has made an arrest in the vandalism of a historic fountain on the state capitol grounds (see below), it appears a legal disfigurement has occurred inside the storied building.

While the previous incident was nothing short of riotous vandalism in the wake of the George Floyd incident, today’s incident appears to have not destroyed any property but has still managed to change the appearance of the historic Texas House of Representatives chamber.

A divided House floor is nothing uncommon, but now each desk mate (the Texas House floor has 150 desks arranged in pairs) will be separated by a clear, plastic partition — that is, if the policy does not change by the start of the 2021 Legislature in January.

Add this to the Governor’s temporary pausing of “reopening” phases in response to COVID-19, and deferring to cities and counties on how to regulate large, outdoor events. Just today, the Governor’s office announced the suspension of elective surgeries in heavily populated Bexar, Dallas, Harris, and Travis counties. Also new this week are Texas Education Agency draft directives that public schools must re-open for in-person education while offering online instructional alternatives.

As for the latest Texas House response to COVID-19, opinion is not divided among the actual members. They even seem a little mystified by the development.

Who made this decision? This should have come before the body.

Being after hours, we were unable to reach out to the House Speaker’s office or the Capitol Preservation Board which oversees physical changes at the historic seat of state government.

Back to the Capitol vandalism arrest: According to a press release from the Texas DPS, the apprehended suspect is a 23-year-old Austin man, Keegan Dalton Godsey. Godsey is facing charges for felony criminal mischief, riot, and interference with public duties in the May 30 incident according to the release. Investigators combed through hundreds of hours of video and police department databases. He was booked into the Travis County Jail.

From the hip: How these dividers will affect any other meetings that may occur in the chamber in the foreseeable future — including the Texas Electoral College delegation meeting — is unclear. The Preservation Board previously suspended all public events and visits to the Capitol, which may indicate that state officials are expecting COVID-19 precautions to last at least through the fall.

If you know anything about the May 30 riots and vandalism, Capitol Area Crime Stoppers is looking for more information and anonymous tips at (800) 893-TIPS, or online at AustinCrimeStoppers.org.

If you don’t like the Plexiglas dividers, early voting in the Primary Runoff and in state Senate District 14 special election in Travis and Bastrop counties begin Monday, if you’re eligible. All House districts are up starting Oct. 19 in the General Election. Learn more at www.VoteTexas.org.