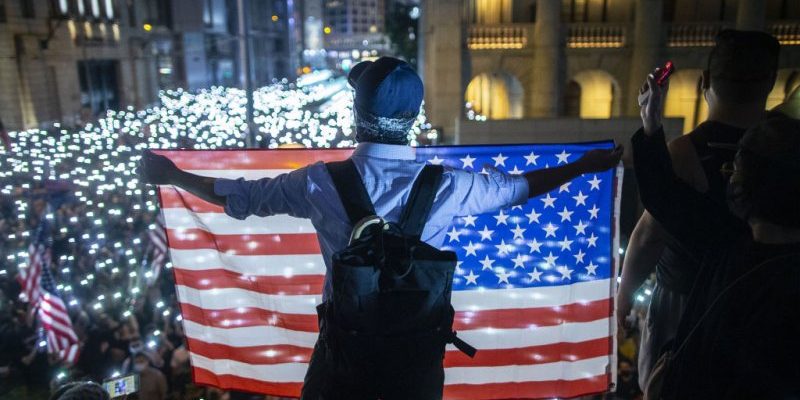 I realize my view in this article is just one view. I also realize the specific emblems of hope I’ve been coming across are also small, relatively speaking.

But I’ve been here before with this narrative—we all have—and I swear it’s turning into something else this time. Usually it takes the inevitability of time, boredom, and over-saturation for Americans to get turned off by one story, thereby increasing demand for media to feed us another one.

That doesn’t appear to be the case this time. This time, it seems more and more Americans are waking up to a fact and a long-standing truth that perhaps even that same media didn’t expect would ever come to pass.

George Floyd’s brother spoke yesterday. Black business owners, including one I saw from the 1992 Los Angeles riots—shown as a chilling parallel to today’s—are crying on video, begging rioters to stop the destruction. One homeless man’s few possessions on the street were lit on fire, and he is shown asking like a child, sadly, why why why?

Yes, sometimes the rhetoric of those speaking out seems to be that we need to vote out people like President Trump, which shows they really don’t understand how much the President is fighting for this country’s well-being, but you have to start somewhere. We have to have a nation intact and at peace first before we can start educating those speakers on exactly what true evil is working in the deep state.

I realize some of my friends, who don’t support Trump, may stop reading and roll their eyes at this point in the article. But I invite you to do something different–don’t stop reading. Keep reading, and if you can’t yet try to see what so many of us recognize in an admittedly very flawed President, then at least try to glean the good and uplifting message that could very well win this war against a hidden enemy, Trump or no Trump.

That said, as a supporter of President Trump, I have been inspired to witness what else I am seeing in great numbers. And I mean great numbers. Black American citizens defending and supporting the President through all of this, working the video and social media technology lines to try to wake their own people up to the secret destruction the deep state is attempting to levy on black Americans.

There was even a black man from Alabama that recorded a stern warning to Antifa—stay the f**k away from our state or you will be handled accordingly.

I had never been prouder of an Alabaman in my life (joke!).

It’s all about purposeless violence, real hate, and a domestic terrorist group that is being paid to destroy cities and leave a brand new wake of racial division–

People are finally seeing it all.

And we may very well have COVID-19 to thank for that.

See, it all happened too quickly, too conveniently. Usually these media narratives are spread out enough to allow people to get back to their normal lives for a time before they are slammed with another wave of race- or sex- or politics-baiting rhetoric. But they couldn’t do that this time. The days are running thin before the fall election, and it’s all guns-ablaze for the enemy now.

The problem for them is that they played a self-destructive hand. Americans, most of us, are not that foolish. Many of us were tipped to something fishy when everything being told to us about a virus for months flipped entirely to something else—and it happened overnight.

Not only that, but Americans smelled the rotten fish in the room when all of a sudden—after months of being shamed into it–it was okay not to social distance if you had a brick and bottle of gasoline in your hands. You couldn’t go to church. You couldn’t go have a burger with friends. You couldn’t do anything truly together.

Except burn a city down.

When the protests first started raging out of control, some liberal politicians tried to turn the increasing violence into a weapon with which to attack Donald Trump. It was the same song, different dance. Everything is this man’s fault.

As the hours passed, and videos proved that there were no “white supremacists” burning buildings, looting stores, or attacking cops, it was becoming increasingly evident what was going on. Videos showed young white and black people, not white supremacists, serving as the terrorist element setting buildings and  George Floyd’s honor into flames.

The name Antifa came back to the front of our collective lexicon.

COVID-19. Stay home, be safe. Antifa. Don’t stay home, make it dangerous. It all happened in a flash, and Americans watched it unfold right before their eyes.

And because of that, dare I say, a growing number of citizens who perhaps bought into the lie that President Trump is the enemy will start to realize that the enemy has been someone—or something—else all along.

On Saturday, President Trump warned that the U.S. government would apply the domestic terrorist tag to Antifa, which, of course, it always has been. That same day, U.S. Attorney General William Barr confirmed what Americans had already figured out–that Antifa had hijacked the initially peaceful protests and turned them violent for their own gain. And none of that gain had anything to do with George Floyd.

That angered many black Americans.

Two black women confronted two white women who were spray-painting “Black Lives Matter” on the front of a Starbucks building.

“Hey! Hey! Don’t do that! Please don’t do that!” the off-camera woman can be heard saying.

The Antifa member had a pathetic response. “Don’t police how people express themselves.”

The black woman said that no one asked them to spray paint the side of a building, especially in the name of black people.

“They gonna blame that on us!” the woman behind the camera shouted. “Y’all are part of the problem.”

The rest of that article is worth the read.

And just like that, the lightbulb went off in so many people’s minds. How can a media push a stay-home-stay-safe narrative for months and say absolutely nothing along the same lines when terror and anarchy break out? Articles and videos such as this one are all over the Internet, and people are waking up.

I never thought I’d say anything positive about the pandemic that destroyed so many lives, and certainly not about the media’s handling of it. But it turns out all of it has become a lightning rod for so many of our American brothers and sisters to finally see what wool has been over our eyes for decades now. We have the enemy on the run. In the coming days we have to work tirelessly to keep them there.

Now may very well be our time.

Interested in more national news? We've got you covered! See More National News
Previous Article SADOW: Louisiana’s Legislature Is Making History, At JBE’s Expense
Next Article Tort Reform Is Sent To JBE’s Desk, But With Cracks In The Firmament