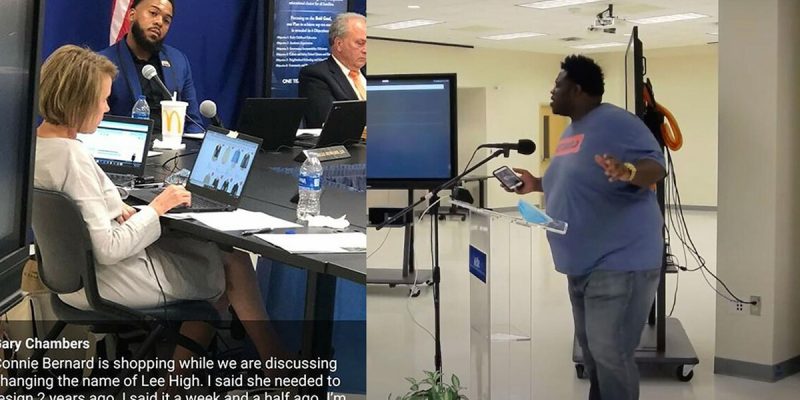 I didn’t jump on the Connie Bernard mess when it first popped, because frankly everything about it makes me just want to get the hell out of this doomed city and never come back. Not to mention that late last week when this whole thing spun up there was also the Middleton Library mess at LSU, and I simply refuse to focus my attention on two separate ginned-up racial squabbles in the same town simultaneously.

So we handled the Middleton Library thing and we left this alone. But the Connie Bernard thing didn’t go away, did it? Apparently we would be remiss not to at least touch on it, and that falls to me.

Yesterday, Bernard made waves by announcing that no, she wouldn’t be resigning from the East Baton Rouge Parish School Board following a giant controversy surrounding her “insensitivity” in the face of a move by Baton Rouge’s activist mob and particularly by Gary Chambers, the gluttonous fellator of microphones who earned himself a spot on national TV to whine about racism in Louisiana’s capital city.

Let’s back up so we understand where all this comes from.

Several years ago, Lee High School in Baton Rouge was renamed. It had been named for Robert E. Lee, who as we know is an unperson in the eyes of the American Left and cannot be honored in any way, shape or form. But the School Board specifically removed any reference to Robert E. Lee and changed the school’s name to just Lee. It could be named for Bruce Lee, Stan Lee, Henry David Lee, Christopher Lee, Tommy Lee, Spike Lee or Derrick Todd Lee. But it specifically is no longer named for Robert E. Lee, by edict of the school board.

The controversy was not put to bed, though, because there is no limiting principle behind the “activist” mob’s exploits. There is no point at which they say “OK, this is enough. We’ll shut up and leave you alone.” These people are not Cincinnatus, and they have no plow to go home to.

Least of all Gary Chambers, who when he’s not getting smacked around by other race-hustlers in Target parking lots very much resembles a shark (albeit a quite rotund shark) – he has to keep moving forward and eating the goodwill of the Baton Rouge area or he’ll die.

Chambers, who embroiled himself in controversy of his own a few years ago when he was called out for essentially scamming the family of Alton Sterling out of donations from a bank intended for their upkeep (or more to the point, intended for keeping Chambers from marching demonstrators to their front steps), ran for the state Senate last year and suffered a humiliating defeat. Regina Barrow clobbered him by a 74-26 margin, which would seem to be just about as complete a rejection as anyone could suffer. Other people in Chambers’ line of work might take that sort of ignominious comeuppance as a signal that it’s time to get a real job and stay off the political radar for a while.

Nope. Not this guy. He just went looking for a new target of opportunity.

And he found one in Bernard, who is in her third term on the East Baton Rouge Parish school board despite being a controversial figure in her own right. Especially after she was caught on video in 2018 attacking a young neighbor of hers for the sin of, it appeared, throwing a party in which the noises was disturbing. Bernard’s resignation was demanded then; she refused, and then won re-election unopposed three weeks later.

Bernard resigned from her position as the school board’s vice president but stayed on the board. She said the reason for stepping down was that her husband had been diagnosed with cancer and she needed to devote more time to family. Since then she’s largely laid low.

But last week, when the new controversy over Lee High School emerged, Bernard spoke up and said those who agitate for renaming the school ought to educate themselves more clearly about who Robert E. Lee actually was, as he was hardly the monster the modern Left make him out to be.

That got her blasted by black members of the school board despite Bernard apologizing (lesson: never apologize to these people; it does no good).

“If we have to get uncomfortable and have these conversations from colleague-to-colleague, it’s time that we do it,” said Howard.

Then there was a school board hearing at which lots of boring speeches were made about how awful Robert E. Lee is and how awful it is that the school no longer named for him is named for him. Virtually anyone who had to sit through that would justifiably be bored stiff. 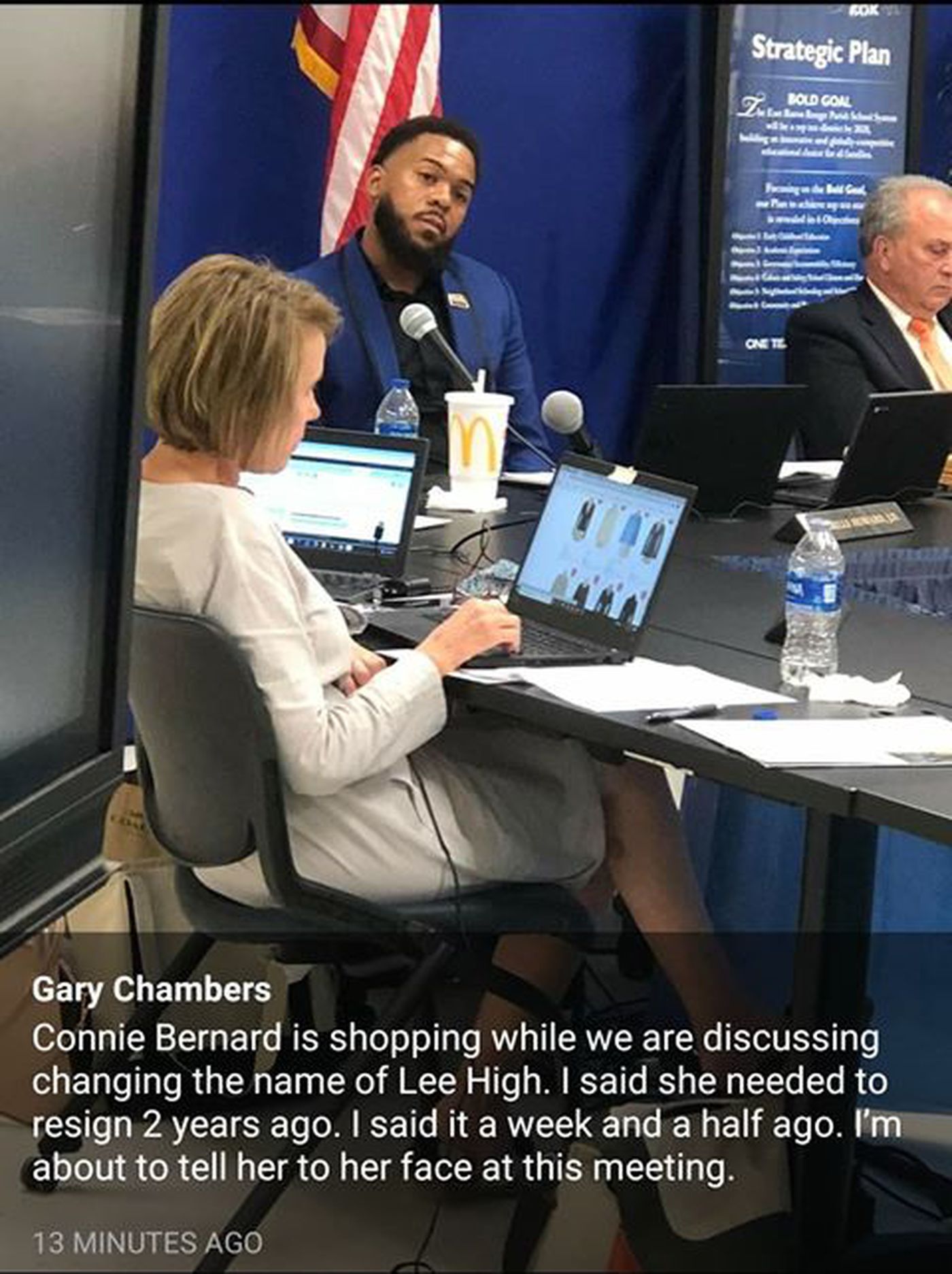 In the photo she’s looking at dresses online, which implies she’s bored and not particularly interested in listening to the speechifying about Lee High School. By the way, this happens in just about every single legislative context. It happens in Congress, it happens in state legislatures, in county commissions and regulatory boards, and yes, in East Baton Rouge school board meetings. If you think Connie Bernard was the only person looking at the internet while those speeches droned on and on, you are mistaken.

She isn’t alone in that disengagement. Just above Bernard in the photo is Tramelle Howard, the board member who trashed her for defending Robert E. Lee. You wouldn’t exactly say he’s rapt with attention at whoever is babbling about how awful it is that there’s a school with those three letters on the sign.

But naturally, getting caught looking at dresses while listening to people whine about racism is something we can’t have. Chambers decided he’d make a moment for himself out of Bernard’s online shopping excursion, and this happened…

Interestingly, nobody in this crusade against the dead has managed to put forth a suggestion as to what name should be on the sign in front of the high school.

At least, none that we’ve heard.

The rather ill-fitting t-shirt Chambers wore while launching that rant says “#LetsBuild,” which is somewhat ironic since all he’s talking about is tearing down the sign in front of that high school.

It would be one thing if there was a replacement name being talked about. I wouldn’t exactly get excited if, for example, somebody suggested that the school be renamed for Kip Holden, who served three terms as the city’s first black mayor; I didn’t think Holden was particularly effective in the job and Baton Rouge certainly declined on his watch. But at least that would be something worth discussing – a good argument could be made that Kip Holden is more relevant to Baton Rouge’s history than Robert E. Lee is.

But nobody is making that argument. Not for Holden, or for anybody else. It’s simply a matter of conducting a war on the dead.

Meanwhile, Chambers went on national TV and proceeded to complain that things are so bad that there’s a street not far from the Lee High School campus named “Whitehaven.” It’s become comical.

And yesterday, Bernard, amid the bonfire they’ve built around her, put out a statement saying she’s not resigning, and, essentially, they can kiss her ass.

Good for Connie. I’m not a fan, and perhaps the school board would be better off without her on it (not that it matters, because Baton Rouge’s public schools are a wasteland of fraud, corruption, incompetence and failure and they’re the single most important factor in the city’s rapid decline, and she might literally be the least of that school district’s problems), but resistance to this idiotic moment has to start somewhere. And if it starts with somebody crazy enough to look at all of this and NOT conclude a job on a school board isn’t worth this kind of hassle, so be it.

If Connie wants to be a lightning rod, if she’s willing to stand against the storm, then by God I’ll stand with her. So should you. It’s either that or it’s time to load up the U-Hauls and get the hell out of Baton Rouge before the Gary Chamberses of the world turn the place into Jackson or Baltimore or Newark, as they surely will.