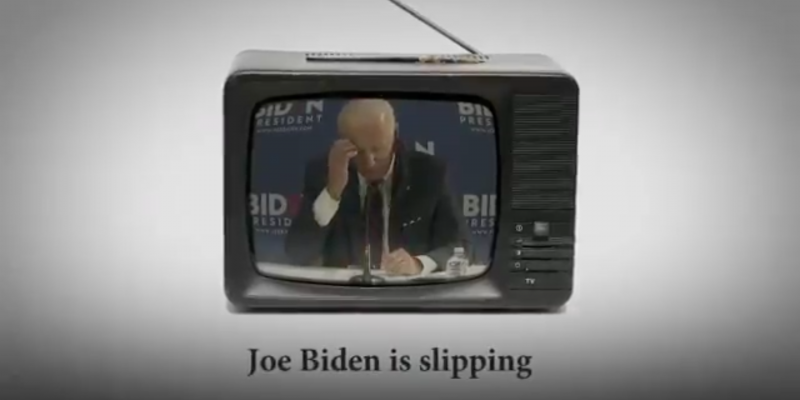 We were all wondering if and when it would happen. Well, the Trump campaign pulled it off. They released a new attack ad highlighting Joe Biden’s much-discussed cognitive decline.

I say they pulled it off because, well, the ad doesn’t feel dirty. It doesn’t seem like they are beating up on the poor old man.

It makes the viewer feel pity for Biden which will not help his existing problem in the area of voter enthusiasm. The key to pulling it off was showing some of the worst and most recent Biden slip-ups combined with a female voiceover who sounds concerned for him.

“Joe Biden is slipping,” the narrator says. “Now at the age of 77 years old and running for president for the third time, Biden is clearly diminished.”

The ad plays the video of Biden butchering part of the Declaration of Independence saying, “All men and women created– by the, go– you know the thing.”

It then goes into footage of Biden mumbling, “Sometimes I wake up and I think it’s 1920.”

The blistering attack ad concludes with a powerful statement saying, “Joe Biden does not have the strength, stamina, and mental fortitude required to lead this country.”

I have to admit, I thought it would be difficult to take this line of attack overtly without turning off voters due to the “mean” nature of it. But the truth is that the mental fitness of the next president of the most powerful nation on Earth is entirely legitimate to question, especially when liberals have done as much to President Trump without any good reason for doing so.

Love him or hate him, most American voters likely know that the 45th president is not suffering from any cognitive decline but they are not so sure about Biden. Voters in key swing states should expect to see this ad and others like it in the coming weeks and months.

Watch the devastating 30-second attack ad for yourself below and let us know what you think!