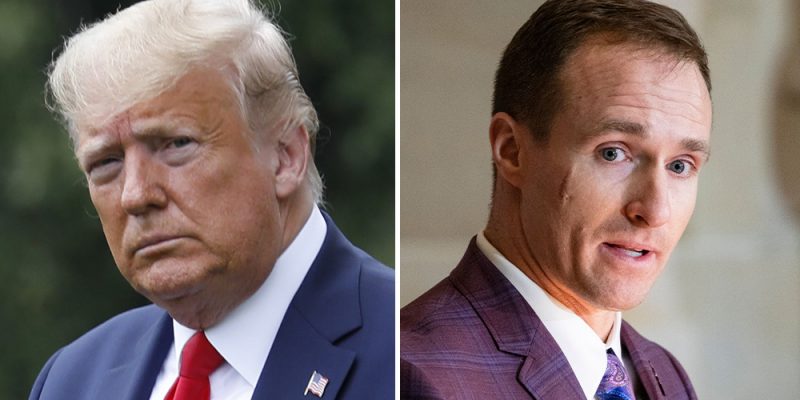 It’s not a loss if it was never that important in the first place, and I say that as a lover of the sport of football.

In fact, it will be a stance and a sign of the coming victory for all Americans of every race and creed.

As many Americans knew before the has-been pandemic, as many discovered during it, professional sports are about as essential in the grand scheme of things as the white stripes on a college football. It is yet another positive by-product of the mandated lockdowns, perhaps an unintended consequence for those attacking America behind the scenes—that, moving forward in life, millions of Americans are going to turn off their televisions and turn to new, more intimate ways of passing the time with themselves and their families.

A mass addiction of sorts to the celebrity culture might have been broken in many homes across the country. Americans have been forced to turn inward in these first months of 2020, and whenever that happens, introspection often produces the realization of truths to which we’ve been asleep.

This unessential/essential idea is most certainly true with the National Football League. The sport of football for fans, as every single American already knew before 2020, is not a matter of life or death. No one would have argued that, even before the lockdowns.

But now there will be droves of those fans abandoning ship, cutting bait, whatever metaphor you want to use.  Many people who had to grind out months of a quarantine are likely to see–for what it is–this politics-inflamed dramedy playing out on a national stage.

This is why President Trump needs to close his mouth, or his Tweets, concerning the flag issue and the NFL. The league has made its decision. It has made its stance.

But in the grand scheme of things, what the NFL and its millionaires pontificating from on-high think shouldn’t be the stuff of Gospel.

Take a knee on this, Mr President.

As most of us know, San Francisco quarterback Collin Kaepernick took a knee on the flag and the national anthem four years ago, stoking a protest culture in the NFL that had many players kneeling in a show of solidarity. Former LSU Tiger and 49er teammate Eric Reid joined Kaepernick in kneeling before the final preseason game. Seattle Seahawks player Jeremy Lane also did not stand before his game that day, stating, “It’s something I plan to keep on doing until justice is being served.”

This is one of those small samples that certainly represents the whole of what transpired that season. The conversation continued, of course, but until now, the discussion about the flag and the national anthem before NFL games has taken a bit of a back seat to other narratives taking center stage in the media.

Now it’s June of 2020, and we have squeaky-clean quarterback Drew Brees apologizing for stating a balanced, heartfelt, unity-building answer to a question asked to him. The response was off-the-cuff and illustrated Brees’ love for his family and country.

Of course that authentic, human response elicited the most violent of verbal attacks, including those from his teammates, attacks that precipitated Brees’ Instagram apology.

In his apology, Brees said that “in an attempt to talk about respect, unity, and solidarity centered around the American flag,” he had made “comments that were insensitive and completely missed the mark.” He added that his words lacked “awareness and any type of compassion or empathy.”

Of course this apology wasn’t enough—never is—for everyone. Per ForTheWin:

In a not so great part of the apology, Brees writes: “those words have become divisive and hurtful and have misled people into believing that somehow I am an enemy.” The sentence somehow suggests the words have a mind of their own, but Brees said the words. They didn’t say themselves.

This is why you don’t apologize in situations like this, and I, personally as a man, am a big apologizer. I believe it is a great healer and humbler. But in public situations such as this, where tempers are flaring and misinformation is the norm, a good man simply offering his perfectly balanced response to a question should not apologize. If he could have said things better, fine. And even that is stretching it, because Brees’ words were as peace-oriented and Christian as they come. The heart of Brees’ message was unmistakable. It was built on a unifying principle Jesus Christ himself can be proud of.

There was zero need to apologize. An NFL scoreboard full of zeroes.

But what did Brees do after the apology itself? He doubled-down on his suddenly newfound stance, criticizing President Trump, who tweeted this out to NFL commissioner Roger Goodell over the weekend:

Could it be even remotely possible that in Roger Goodell’s rather interesting statement of peace and reconciliation, he was intimating that it would now be O.K. for the players to KNEEL, or not to stand, for the National Anthem, thereby disrespecting our Country & our Flag?

Here is that statement from Goodell:

“I personally protest with you and want to be part of the much-needed change in this country. Without Black players, there would be no National Football League, and the protests around the country are emblematic of the centuries of silence, inequality and oppression of Black players, coaches, fans and staff. We are listening, I am listening, and I will be reaching out to players who have raised their voices and others on how we can improve and go forward for a better and more united NFL family.”

On Friday, Trump tweeted his support for Brees and said the Saints quarterback should not have had to apologize for loving his country. He said there are other things we can protest, but flag shouldn’t be one of them.

Brees did not back the President in kind. He wrote, “To Donald Trump, through my ongoing conversations with friends, teammates, and leaders in the black community, I realize this is not an issue about the American flag. It has never been. We can no longer use the flag to turn people away or distract them from the real issues that face our black communities.”

He says this to a President who never apologizes for doing what is right and good for the black community.

Nick Underhill, who covers the Saints, tweeted that when “Brees addressed the team during Thursday’s meeting his teammates saw him in a very emotional state. They could tell it hurt him to hurt them, which mattered. He had tears in his eyes as he apologized. His actions since then continue to support what he said on Thursday.”

This is all fine and dandy. If Brees can switch philosophies that quickly, and not only apologize for what he said but issue a statement to “Donald Trump,” then perhaps many Americans’ defense of him is unsubstantiated. Perhaps Brees should have tears in his eyes for how much he has hurt so many of his fans–of all races in America–who also don’t have a racist bone in their bodies but have to sit there and take it from the media every single day.

He broke the hearts of many Americans who didn’t have a voice of their own in their own right. This includes a growing number of black Americans who are not subscribing to the narrative that America is inherently bad.

Even if Drew is a great person, which I suspect he is, it is time for President Trump and Americans who are sickened by both this story and this entire 2020 theatre to make the business decision Drew himself made in apologizing for the very things the majority of Americans feel.

It is time for game over for the NFL.

Today I ask the President to halt all pleas to the league concerning this issue of the flag. Not because I disagree with his love for the flag–far from it. I ask him to protest this inflammatory narrative being pushed by the league and media, particularly Disney-owned ESPN, just as he always has, but in a different way.

After seeing what he has tried to do for years in communicating the importance of flag and country–to no avail–I’m asking him to do exactly what they have done.

It isn’t important anymore, Mr President.  They don’t want to side with most Americans. Let them be. Let them skip on down the road to economic perdition. What the NFL does or doesn’t do will have little impact on this overall war you and so many others are fighting behind the scenes to secure American freedom and prosperity–in the truly essential areas of life where brown leather balls are not the gods of our Sundays.

Respect their right to choose. Respect their right to make a stand. They are exhibiting the free will that all of us are fighting for when we argue against the enemies of America trying to take it from us. They are exercising their rights as American people, even though so many see it as a show of disrespect to the military that sacrificed so much to provide that very layer of freedom and protection they are abusing.

Allow them the chance to turn off the TV and take a knee themselves.

Perhaps eventually, instead of a protest, it’ll become the quarterback’s symbol of victory formation for an entire nation of races.