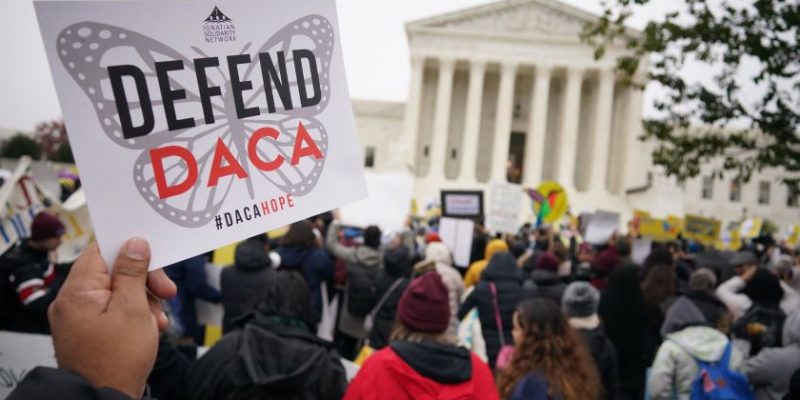 President Trump did not mince words in responding to what he called the “horrible & politically charged decisions coming out of the Supreme Court” following today’s 5-4 decision on DACA.

The Deferred Action for Childhood Arrivals program gives illegal immigrants who were brought to the U.S. as kids a two-year, renewable grace period that protects them from deportation.

The president let them have it, posting multiple tweets aimed at the Supreme Court and issuing a call to action to like-minded voters writing,

“These horrible & politically charged decisions coming out of the Supreme Court are shotgun blasts into the face of people that are proud to call themselves Republicans or Conservatives. We need more Justices or we will lose our 2nd. Amendment & everything else. Vote Trump 2020!”

Trump brought some levity to the controversy tweeting moments later, “Do you get the impression that the Supreme Court doesn’t like me?”

The 45th president expressed grave concern over several of Supreme Court’s most recent rulings and reminded voters of just how high the stakes are in the upcoming election writing,

“The recent Supreme Court decisions, not only on DACA, Sanctuary Cities, Census, and others, tell you only one thing, we need NEW JUSTICES of the Supreme Court. If the Radical Left Democrats assume power, your Second Amendment, Right to Life, Secure Borders, and Religious Liberty, among many other things, are OVER and GONE!”

Lastly, the president announced that he will repeat his popular initiative from 2016 when he released a list of names from which he will choose the next Supreme Court Justice writing,

“I will be releasing a new list of Conservative Supreme Court Justice nominees, which may include some, or many of those already on the list, by September 1, 2020. If given the opportunity, I will only choose from this list, as in the past, a Conservative Supreme Court Justice. Based on decisions being rendered now, this list is more important than ever before (Second Amendment, Right to Life, Religous Liberty, etc.) – VOTE 2020!”

Chief Justice Clarence Thomas, appointed by Ronald Reagan, is likely the most popular conservative on the court and issued a concise but powerful rebuttal in his dissent writing,

“Today’s decision must be recognized for what it is: an effort to avoid a politically controversial but legally correct decision.”