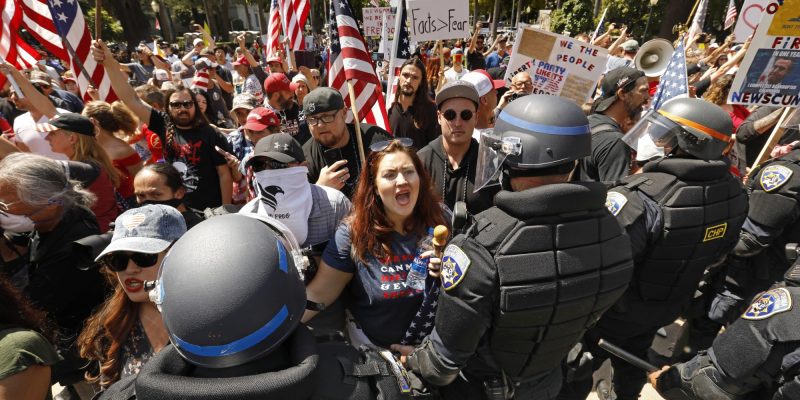 When is the chaos in the streets and our public spaces going to finally end?

Not any time soon unfortunately.

The state of the current COVID-infected society and economy, opportunistic Democrats, a leftist co-opted education system, and the Democrats’ small “c” confederates in the established media.

The reason why the protests were unprecedentedly large goes far beyond the catalyst (George Floyd’s death) as his name was largely buried with him.

Both the agenda and the chants changed overnight, a tactic that is straight out of the playbook penned by their iconic left-wing hero agitator Saul Alinsky (see Rules for Radicals).

But the bodies are in the streets because people aren’t working and at the current rate of generous unemployment compensation, are practically being provided by Congress with a full-time salary to protest.

Until folks return to their jobs or the college lecture hall there will be ample participation in the only group activity being tolerated by Democratic office holders, until they show up at their doorstep.

The separation from society at large has had a profound impact on the psyches on people, with the angst brought to a boil in the greatest disruption to America since World War II.

And this is where the Democratic politicians come in, as they’ve been aggressive in cracking down on hair salons and religious services, including funerals, yet have allowed if not joined these protests that should not have been permitted in the midst of a pandemic that only seems to be a concern during Trump rallies.

And reports have slipped through the media’s information Iron Curtain narrative that the protests have figured into the steep rise of coronavirus infections.

Practically every major city that has been burned and looted during the demonstrations is run by Democrats with some cities devoid of even a modicum of effective Republican opposition.

As the GOP gave up the ghost on competing for elected offices and to some degree even votes in America’s urban areas, preferring the more efficient and cheaper route of running up the score in suburbia, the alternative to the Democrats became their own left wing.

And thus was born AOC and a host of other socialist usurpers of positions long held by establishment Democrats.

Since winning the Democratic primary is tantamount to election in practically all of the major cities, Democratic politicians competed with each other to see who was more to the Left, as the party’s socialist progressive wing has been on quite the purge in recent years.

Which is how you end up with a Che Guevara-quoting avowed Sandinista like Bill De Blasio as mayor of the country’s center of capitalism.

Still the Democrats, who have dodged making condemnations of the violence, murder, and theft, see the protests as overall useful to their brand of politics.

They smell opportunity in the collapse of order by both radicalizing young people and getting them involved in something that can then be parlayed and sustained through November.

The “hide under the desk” approach (see Biden 2020) by refraining from criticizing the most shameful aspects of the protesting stands in contrast to the old heroes of the party.

Bobby Kennedy’s stated position that being enrolled in college should not exempt anyone from military service cost him votes to Eugene McCarthy but it was bold, right, and honest.

That a political party is willing to stand as beneficiaries to a movement that desecrates  memorials and national symbols puts into perspective their hollow pearl-clutching throughout the Russia hoax escapade that frayed America’s political nerves and further eroded confidence in institutions, from the media to the federal bureaucracy, both of whom were supposed to be above politics.

Burning the American flag and toppling monuments to George Washington and Thomas Jefferson is the embodiment of treason, yet the closest thing to a rebuke you’ll hear is that for the safety of the protesters, they should’ve gone through the municipal government for permits.

After decades of attempting to indoctrinate America’s youth into a sense of self-loathing about the country, the education system, especially in the public realm, have finally succeeded to producing a woke generation that can tell you all about the evils of an Italian explorer from the 1400’s but nothing about Marxism’s nine-figure body count over the past century.

Ask one of these smug protesters who believe they possess some kind of hidden knowledge about history but couldn’t say one thing about the Holodomor in Ukraine.

And then there’s the established media, an entity so immersed in left-wing ideology and brazen in their unprofessional bias that many of their outlets should be registered as Democratic-aligned super PACs.

The American corporatist media displays their contempt for this country and the intelligence of its citizens on an hourly basis as they disingenuously frame the perpetrators of church ransackings and store-front lootings as peaceful protesters.

You’d think they were producing resume submissions for openings at the North Korean propaganda ministry when broadcasting with a straight face the peaceful nature of a protest with a building engulfed in flames over the reporter’s shoulder.

The media does not challenge the conduct or ideology of protesters by asking basic questions such as what actions or efforts they are undertaking to reduce the primary source of violent black deaths (not the police).

Nor does the media ask the protest leaders about their actual agenda, but instead focusing solely on sentiments that are logically disconnected from reality.

Yet two wealthy St Louis residents pop out their mansion with firearms and we can’t hear enough about them.

The media seeks to create societal friction by sowing seeds of mistrust within the country to destabilize the current administration for the benefit of the Democrats.

America is caught in the midst of the perfect protest storm: an agitated mass of people with too much free time on their hands, self-righteous vanity in their hearts,  and a leftist cooked version of American history in their minds rampaging about the cities without fear of consequence from Democratic mayors, police chiefs, and prosecutors.

And the media is there to shower then with adulation and attention, bestowing to them status as the heirs to the romanticized 1960’s civil rights movement.

In the short-term until life returns to normal and Democrat officials quit indulging the chaos, the only thing that will change are the weekly grievances as the protests will remain in the streets.

In the long term, the Democrats must face consequences at the ballot box for their cynical maladministration; taxpayers should demand accountability from the school system about precisely is being taught to their children specifically the end of the systemic poisoning of the impressionable minds; and people need to turn off the networks and cancel newspaper subscriptions to those who report a leftist narrative in lieu of actual news lest the cycle repeat but with far more severe consequences.