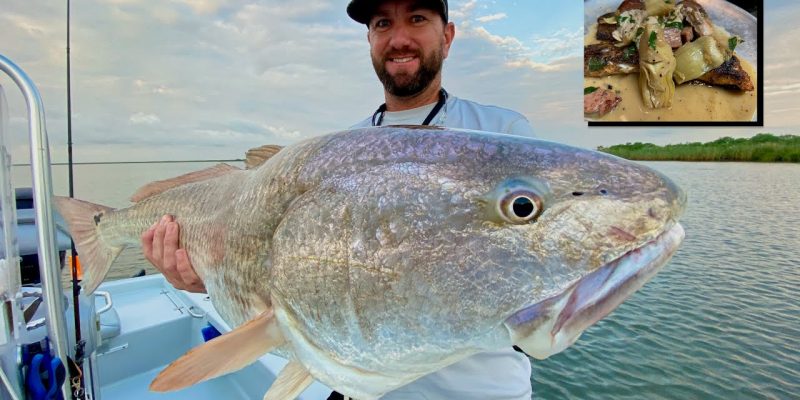 Matt Caire bought a little insurance last week. The veteran Empire skipper suspected we’d be able to catch a limit of redfish on the east side of the Mississippi River while throwing nothing but artificial lures, but Caire didn’t earn his reputation as one of the best South Louisiana fishing guides by being careless.

So Caire added some live shrimp to his bait well, just in case the fish were being extra finicky and needed a little extra inspiration.

As it turned out, he could have saved his money.

Caire and I left Delta Marina before the sun had a chance to really brighten the eastern horizon, locked through into the Mississippi River, and scooted into the fish-rich marshes on the east bank of lower Plaquemines Parish. At our first stop — an indistinct point that protruded from a cove into an expansive bay — giant rafts of mullet were having their morning ruined by unseen piscatorial submarines below.

One was clearly a shark, as Caire and I could see its emergent fin running through the baitfish. But there were also plenty redfish in the mix. Caire caught a bull almost instantly, and added a number of slot fish as well.

It didn’t take very long to realize it was going to be a good day.

From our first stop on, Caire and I caught redfish and more every single time we put the Power-Poles down, and we threw almost nothing but plastic baits.

We were particularly pleased with our success because Burney Young, chef extraordinaire at Delta Marina, had offered to cook some of our redfish for us upon our return.

That proved to be earlier than expected due to our consistent success, but Young was ready and waiting when we pulled up to the dock. Caire quickly cleaned the fish while I got set up, and before long, Young was turning our ultra-fresh fillets into blackened redfish topped with a delectable oyster, artichoke and andouille sauce.

He served it to us piping hot, and I ate it so quickly, I would have licked the plate if it wouldn’t have been rude.

To see all the details, including how Young prepared the fish, check out the video below.

Interested in more national news? We've got you covered! See More National News
Previous Article ‘Hamilton’ Continues To Rake In Cash While Liberals Cry ‘Not Woke Enough’
Next Article HOLTON: Attacks on Churches Are The Latest Crimes of the Marxist Insurrection