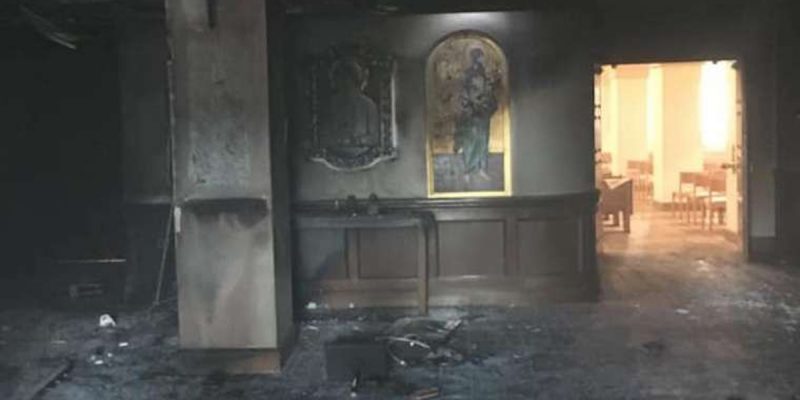 For more than a month America has been wracked by leftist violence perpetrated by Antifa and the Marxist Black Lives Matter movement.

In addition to violent protests, rioting and looting, the insurgents started by targeting statues and monuments to Confederate figures from the American Civil War. But they certainly did not stop there. They quickly began to target statues and monuments dedicated to just about any historical American figure, including Washington, Jefferson and Lincoln.

Clearly, the movement is anti-American.

But the latest acts of violent vandalism reveal vividly that the Antifa/BLM movement is a Marxist, communist insurrection.

Last weekend, Christian churches and religious statues were vandalized and attacked in New York, Massachusetts, Florida, California and Missouri. The attacks included the burning of churches and even a vehicular ramming incident. Pictured above is the Queen of Peace Catholic Church in Ocala, Florida, which was set on fire with parishioners inside.

Not surprisingly, the so-called “mainstream” media has mostly ignored these attacks and where they did mention them, they feigned confusion as to who could possibly have been responsible.

Even a cursory study of communism going back to its earliest days would provide solid clues as to who was responsible for the attacks on churches.

Karl Marx, the father of communism, the barbaric political system that ultimately was responsible for the deaths of 100 million people in the 20th century, particularly hated the church. He saw it as a chief obstacle to the utopia that the communist revolution was sure to usher in, which featured the State as god.

Marx described religion as “the soul of soulless conditions” and the “opium of the people.” He called for the abolition of religion as an illusion preventing the people from having true happiness. It was based on Marx’s atheistic philosophy that communist regimes of the 20th century, led by the Soviet Union and Mao Zedong’s Red China, made atheism the law of the land.

Given Marx’s clear hostility to the church and BLM’s Marxist roots, as well as Mao Zedong’s attacks on religion in his cultural revolution in the 1960s, combined with Antifa’s Maoist orientation, it’s not a reach to connect the dots and come up with the likely suspects in these barbaric attacks on churches across America.

Until our elected and appointed officials on the state and local level across America wake up to the reality of the communist insurrection we face and choose a side—OUR SIDE—we cannot begin to roll up these violent revolutionaries and bring them to justice. We can do it, we just lack the political will to do so. Where are the leaders we need today?