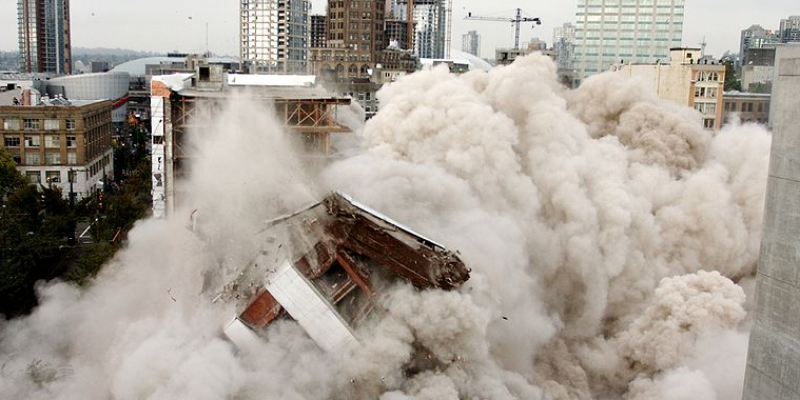 Although a recent poll showed well-over half of Austin residents favor keeping the police department funded, one leftist Council member is taking things a step further:

Austin City Council District 6 member Jimmy Flannigan, a Democratic activist, is not only calling for the de-funding and decentralizing of the Austin Police Department and the farming out of many of its duties, but is now calling for the demolition of its downtown headquarters.

Austin Police Headquarters, a five-story Brutalist edifice located off Interstate Highway 35, has been an epicenter for Black Lives Matters protests and a few number of riots and flag-burnings.

As part of two proposals, Flannigan, who is up for re-election in November, suggested that not only is headquarters hampering the uniting of historically black and historically white portions of downtown but has reached the end of its useful life. 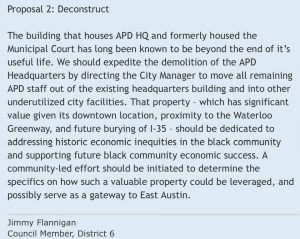 “We should expedite the demolition of the APD Headquarters by directing the City Manager to move all remaining APD staff out of the existing headquarters building and into other underutilized city facilities,” Flannigan wrote to a Council message board Monday. “That property – which has significant value given its downtown location, proximity to the Waterloo Greenway, and future burying of I-35 – should be dedicated to addressing historic economic inequities in the black community and supporting future black community economic success.”

The burying of I-35 has been proposed to give pedestrians a walkway across the major highway corridor and as a means to, again, bridge the historically black East Side with the historically white West Side of downtown Austin.

Just Saturday an armed Black Lives Matters protester was shot by a motorist.

“Nothing is more symbolic of recent efforts to de-fund the police than this scheme to demolish Austin Police Headquarters,” said Kelly, a native Austin resident. “If anyone for even a second thinks that these proposals are designed to save money or increase accountability, remember that Jimmy Flannigan is now proposing swinging a wrecking ball at the very heart of law and order in our city. A majority of our city wants to preserve law and order, and we can do better than Flannigan in November.”

Flannigan said the ideas are in their infancy and are a “starting point” for future action.

The Austin City Council is expected to discuss plans to reduce funding for APD at its Thursday meeting.

Interested in more news from Texas? We've got you covered! See More Texas News
Previous Article We Just Found Out Why Jim Bernhard Isn’t On The LSU Board Of Supervisors
Next Article Study: 68 percent of workers earned more on unemployment with $600 weekly enhancement