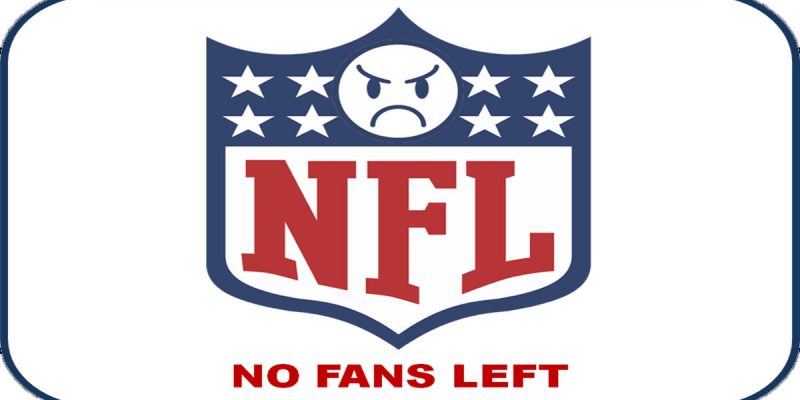 With yesterday’s news that at every NFL game for the first week of the season the league will mandate the playing of “Lift Ev’ry Voice And Sing,” which is known as the “Black National Anthem,” the virtue-signaling from the league has seemingly reached its peak.

There isn’t anything particularly wrong with the song itself. In fact, it’s an exceedingly Christian anthem, which makes it somewhat surprising that in this excessively secular age the NFL would choose to make “Lift Ev’ry Voice And Sing” an official part of its product.

If you’ve never heard the song or have never seen the lyrics, this can fix both…

Perhaps the biggest problem with playing this before the regular national anthem is that it’s a bit on the tedious side. The one thing about the official national anthem is it can be sung in under a minute and a half. Three and a half minutes is going to be a little much for the TV networks to handle; one wonders whether they’ll bother to include “Life Ev’ry Voice And Sing” in their game telecasts.

Not to mention that black folks are Americans, and why is it that the national anthem for everybody else isn’t good enough for black folks?

It’s just an exceedingly bad look and it isn’t going to go over well. What would have been smarter would have been just to play the national anthem and then bring the players out afterward, so as to eliminate any risk of the kneeling and other crap that players like Malcolm Jenkins would unfurl and give the league yet another black eye.

People are already furious about this. But one reader suggested that what’s worst about this is how empty it is. Rather than inflict another virtue-signaling gesture on the public, he offers, the league ought to make some changes in its business plan by way of redistributive justice…

The time has come to issue a mandate that the NFL become more inclusive. Everything now has been lip service. It’s time to make the owners put their money where their mouths are, literally.

These proposals above are not some Jonathan Swift “Modest Proposal” stuff. This is to make the NFL have a reckoning. The NFL and NBA (I gave up on the NBA a long time ago) have reached the point of no return.

We need a different sort of public pressure that really hits them in the only area they really care about – hence the pandering – their bank accounts. Only one side has been exerting pressure. It’s time for the silent majority to kick in.

That’s something we can get behind.

In fact, we’d like to see Gayle Benson offer up a significant chunk of her ownership stake in the Saints to the black community, since she (1) had absolutely no defense for Drew Brees when he was set upon for expressing patriotic sentiments absolutely nobody should have been offended by and (2) has offered up the name of Dixie Beer, which the Benson family owns, to the mob. Since we’ve seen that she has no qualms about trashing her own product in the name of woke corporate stupidity, she absolutely ought to give up some of her ownership stake to Black Lives Matter activists or some other collection of people fit to receive it. As for the beer, she ought to call it Gold-Digger, or stop brewing it altogether.

And the Saints ought to move out of Jefferson Parish, seeing as though Jefferson is named for a slave-owner. That slave-owner happened to write the Declaration of Independence and was the most important of our nation’s founding fathers save for George Washington, but it doesn’t matter – the Saints should be in New Orleans. Perhaps they can occupy the old Six Flags amusement park or Lake Forest Shopping Center as a new headquarters.

We see lots of talk pressuring the Washington Redskins to change their name. That should happen. The new name for the team ought to be The Scum Of The Earth, so as to properly reflect (1) the majority of the people who work in Washington, (2) the protesters in that city who regularly trash its monuments and historical landmarks, and (3) the corrupt local government and the criminal class to which it panders. Hopefully everyone satisfied to see the name “Redskins” go will run out and buy a jersey so as to identify themselves.

Either way, the never-ending attempts by the NFL to climb in bed with Black Lives Matter and pander to a small segment of the population at the expense of the majority of the league’s fan base – who are less opposed to the politics of BLM (most are, we estimate) than they are to the NFL engaging in politics in the first place, as the NFL is rightly an escape from all that garbage – will unquestionably have a negative effect on its bottom line.

Maybe at the end of the day those prospective new black owners our reader envisions might think twice about taking on such an investment. You can only trash your product so much before it isn’t worth anything anymore. Under Goodell’s mismanagement we might well find that out.