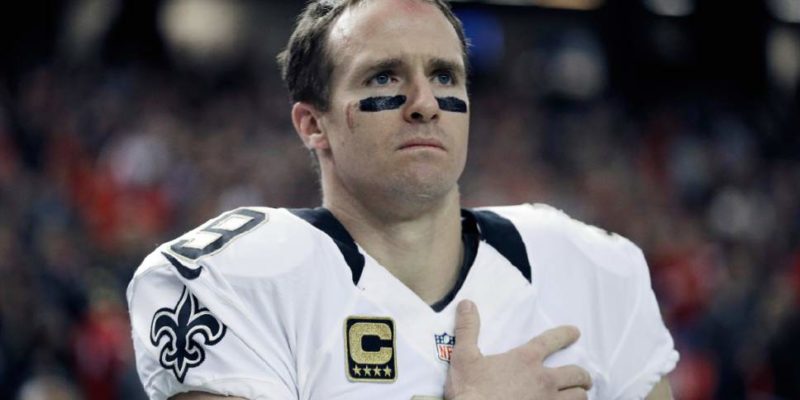 The man who once made an entire state ecstatic ten years this past February, can’t seem to make anyone happy.

Saints quarterback Drew Brees got into hot water when  conveying his feelings in an interview about kneeling during the national anthem.

As soon as I heard his comments, which I agree with, I knew the future Hall of Famer was going to be in a world of hurt not for his actual words but because of the irrational radicalized Twitter mob mentality that had been calling for the “cancelling” of black music legend Gladys Knight for having the temerity of singing the national anthem at the Super Bowl in her hometown of Atlanta without having received the blessing of Colin Kaepernick.

I knew that Brees would be pummeled and would be forced to bend his knee in penance to the militant Left and beg for forgiveness, which he won’t receive because deviation from the party line leads to being unpersoned and declared irredeemable.

Brees will forever be referred to as THAT GUY who took a family photo with President Trump at the Superdome, which was his real transgression.

Brees disappointed those who shared his stance on respecting the flag and anthem though I wasn’t surprised.

It’s easy to be Patrick Henry when nobody knows (or cares) who you are.

But when you are a public figure like Brees, the Left makes it a priority to crush heretics to their ideology as an example to anyone else to keep the rest of society in line.

This is essentially the tactics of the Red Chinese Cultural Revolution applied in “free” America.

Brees has more to lose and to see a lifetime of hard work and athletic achievement be looted from him by a frothing Twitter swarm aided and abetted by an avowedly Leftist media and collaborationist corporate culture was too much for him to bear.

But what’s really disappointing was the treatment he received from his teammates who, if they could not or sincerely did not agree or respect Brees’s opinion, should have at least vouched for the man.

But impressing the mass of social media jackals meant more than standing by their compatriot, who has contributed to their own financial success either directly by catching Brees’s laser like passes or being a part of a successful franchise whose core since 2006 has been Brees.

While Brees’s apologies have been “graciously” accepted by his teammates, the whistle cannot be unblown and the team chemistry is tainted.

I’d be shocked if the Saints win their division let alone make a Super Bowl run in what will be Brees’s final season with the franchise and his last year in the City That Carelessly Forgot what Brees did.

But even more galling than the heat from his fellow players was the absence of support for the man if not the message from Airline Drive.

Where was Sean Payton?

Where was Mickey Loomis?

Where was Gayle Benson?

While tripping over themselves to posture grandly about taking action about an incident that occurred on the opposite end of the Mississippi River (as if there wasn’t sufficient violence in the local community to have merited such a call to arms or press releases locally), the Saints front office did not protect their quarterback’s blind side and allowed his reputation, standing, and character get mangled like Brees’s shoulder in his final game with the Chargers.

Brees made Airline Drive a lot of money over the past 15 years but when he needed a hand, they hid under their desks.

Worse than being forsaken by his teammates, this has to have scarred Brees more than anything and don’t be surprised if he walks straight out the tunnel in his final game and doesn’t look back.

Payton and Loomis have had their scandals involving the intentional injuring of opposing players but they could not stand by the guy who simply said he felt it was appropriate to stand for the national anthem.

Only two people had his back: Tony Dungy and Marcus Davenport. Both were roasted but neither backed down.

How sad that when Brees needed help it did not come from his own coach but from another team and a starter who has spent the least amount of time with him.

The next round of apologies should not come from Brees but to Brees from the front office, the very people who have benefited the most from him.