All around the country teachers’ unions are laying it on thick that going back to work in a classroom, as in the job they signed up for and get paid to do, is unacceptable since COVID-19 is a thing, and therefore schools must not reopen for the fall semester.

This contention has implications beyond just whatever risk might be in store for teachers and kids if the schools reopen. Without the schools reopening in full, the economy can’t reopen in full. Not everybody can work remotely, and therefore millions and millions of parents across the country, and thousands and thousands of them in Baton Rouge, are going to need those schools open five days a week in order to restart their lives.

And of course, if they can’t restart their lives, go back to work and make money because they have to stay home and babysit their kids when the schools won’t take them, then the economy can’t get back to full speed. At least, not without structural changes in education which are likely coming (more on that in a minute).

So we have a bit of a dilemma about the schools, and there are some political overtones afoot which color the discussion. It’s hardly a secret that the Democrats would like to keep the economy hamstrung as long as possible until the November election in order to hurt President Trump. The teachers’ unions have made some pretty stiff demands of the Democrat presidential nominee Joe Biden – essentially, they want Biden to make it all but illegal for private schools to exist, they’ll snuff out as many charter schools as they can and as for homeschooling…it’s safe to say they’re incredibly hostile to it. If Biden wins, the chances of America going to a fully socialized, Soviet-style educational system will be greater than ever before.

That’s why in Los Angeles, for example, the teachers’ unions have been more or less wide open in demanding all of those considerations as prerequisites for going to work at all.

The Los Angeles Teacher’s Union is one of the largest in the state, and the “United Teachers Los Angeles” say public schools should not reopen unless their demands are met.

Their demands include implementing a moratorium on private schools, defunding the police, increasing taxes on the wealthy, implementing Medicare for all, and passing the HEROES Act, which allocated and additional $116 billion in federal education funding to the states.

The United Teachers Los Angeles union says these policies must be implemented on both the state and national level before reopening schools.

They’re not even trying to make the argument that it’s unsafe to go back to work. The facts are in on that question, and they don’t favor keeping the kids at home.

U.S. Rep. Steve Scalise has been diving deeply into that question, and Scalise earlier this week delivered a red-hot indictment of the keep-the-schools-closed crowd. Some highlights…

“The AAP strongly advocates that all policy considerations for the coming school year should start with a goal of having students physically present in school. The importance of in-person learning is well-documented, and there is already evidence of the negative impacts on children because of school closures in the spring of 2020. Lengthy time away from school and associated interruption of supportive services often results in social isolation, making it difficult for schools to identify and address important learning deficits as well as child and adolescent physical or sexual abuse, substance use, depression, and suicidal ideation.” — The American Academy of Pediatrics

The Foundation for Research on Equal Opportunity (@FREOPP) released an important research paper on why and how schools must reopen. Some key excerpts:

“The relatively low risk of transmission from children to adults does not mean that schools should take no precautions. Indeed, the possibility of transmission from adults to other adults in schools remains. Younger teachers, especially those under 45, are at lower risk of serious illness and death. But older teachers and those with certain underlying cardiovascular, metabolic, or autoimmune conditions will need to take extra precautions, and in some cases stay home, in order to protect themselves.”

So there isn’t any serious case to be made that reopening schools will cause a spike in virus cases, particularly if it’s handled correctly. The kids won’t infect the teachers and staff. The adults might infect each other, and so precautions could be taken there – or more realistically, measures could be taken to protect the adults who are at risk of serious complications from COVID-19.

Members of the East Baton Rouge Parish Association of Educators demonstrated to raise awareness about employees’ concerns over in-person instruction amid the pandemic.

Incoming Superintendent Leslie Brown is moving forward with what we first reported yesterday. Students will start the school year with virtual learning until Labor Day.

Brown said the decision is in response to parent and teacher feedback and the the increase of COVID-19 cases in the state.

Students will stay with their assigned schools. Right now, the district said there are enough devices for all of its 41-thousand students. Schools will pick a day and time for parents to pick them up.

Although the school year is starting virtually, teachers are still concerned about their safety and the safety of their students after Labor Day.

“We’re not only concerned about the safety ourselves, but what about our babies in Pre-K to 2nd grade? We’re seeing more information now that they’re attracting COVID. So with that being said, our babies need to see us talk, to hear the language without a mask, because that’s how they learn,” said Anita Augustus, President of the East Baton Rouge Parish Association of Educators.

So you have the teachers’ unions protesting, which certainly wouldn’t contribute to spreading the virus, because they’re concerned the virus would spread if they get stuck in a classroom with a bunch of kids who the data tell us won’t spread it to them.

What do the supposed adults in charge of the schools have to say about all this?

After days of anticipation, East Baton Rouge public schools formally retreated Wednesday from plans to open up the new school year with in-person instruction, announcing it will instead provide only virtual instruction until at least Labor Day.

“We know the fall semester will look and feel different from those of the past,” said incoming Superintendent Leslie Brown. “Just as none of us could have predicted the past four months, the future remains uncertain.”

Oh. Well, that’s a position which will be duplicated across the Baton Rouge area, right?

Church officials said the diocese’s schools have been consulting with Our Lady of the Lake Regional Medical Center, which is making recommendations on classroom configurations and logistics for recesses, lunch and when students move between classrooms.

School and church officials stressed the importance of in-person learning, while also adding that Catholic schools could revert to online learning if the need arises.

After the East Baton Rouge Schools made their announcement to provide a virtual only option to students until at least Labor Day, our news team reached out to other parishes to find out if they are reconsidering how they plan to re-open.

We are told Livingston Parish students will return to school on August 7th under their Phase 2 Plan. Pre-K through second grade students will have face to face learning.

Third through twelfth graders will attend a hybrid model of both face to face and distance learning.

The first day of school for Zachary students is August 10th.

Superintendent Scott Devillier says parents and students can expect to be welcomed back with a hybrid model. Some days will be remote learning, others days learning will take place in the classroom. Social distancing and masks will be required at all times.

So it appears that the schools in the East Baton Rouge Parish system have knuckled under to the teachers’ unions while the rest of the school districts in the area, all of whom perform better, have committed to various degrees of superior service to their customers.

This isn’t sustainable, you know. This is the kind of thing which will accelerate the emptying-out of Baton Rouge and turn the place into Jackson, Mississippi, where some 20 percent of the houses are abandoned or blighted.

Given that the entire model of public schools is on the brink of imploding, as lots of parents who are forced to homeschool their kids are increasingly finding (1) that’s not so awful a burden and (2) their kids might actually profit from it educationally.

But what’s more than that is if you’re forcing these parents to supervise their kids’ online learning, they’re going to get creative about how that’s done. All it takes is one mom with a background as an educator in the neighborhood who isn’t currently working, and a dozen sets of parents who need somebody to watch their kids as they go to work, and the entire paradigm can change like it was the discovery of super glue or the x-ray. 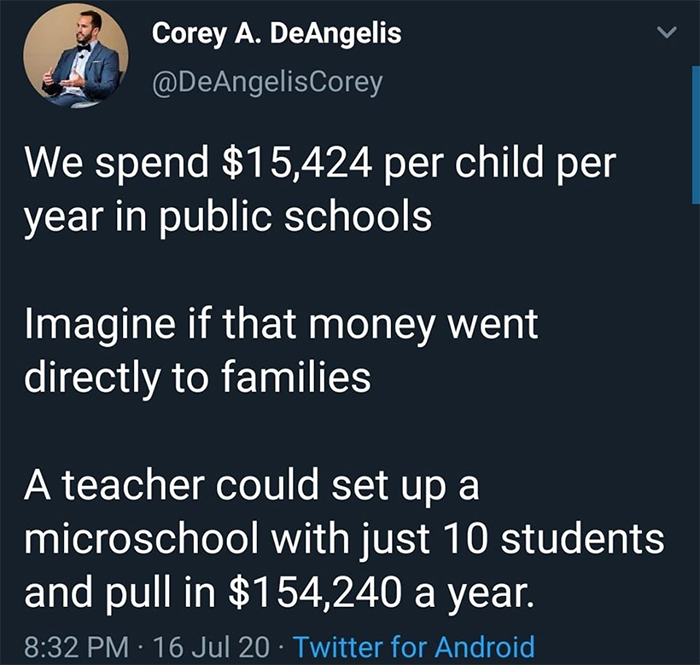 Don’t think that’s a fantasy, either. The Trump administration has already said they’re looking to push the federal school money straight to the parents if the schools don’t fully reopen. While Louisiana’s political class currently has neither the inclination nor the balls to follow suit, parents who are forced to upend their lives because the school bureaucrats and teachers’ unions refuse to provide the services our tax dollars pay for are going to start asking rude questions about why their options stink so badly, and it won’t be long before change is in the air.

And not the kind of change the status quo fans in the East Baton Rouge Schools are very comfortable with.