That’s the conclusion one gets in reading the 38-page ruling from federal judge Martin Feldman in the 4 Aces Lounge case, which arose from a lawsuit filed by a number of Southeast Louisiana bars put out of business, temporarily or, effectively, permanently by Gov. John Bel Edwards’ bar-closure proclamation.

Feldman was the right judge for the case, though federal court might not have been the best venue. A 100-year-old Supreme Court case, Jacobson v. Massachusetts, which established that a state has the right to perform mandatory vaccinations, is thought to control situations like the one Edwards created when he allowed restaurants to serve alcohol on site at their bars, but bars which aren’t restaurants have to be closed.

And though in his ruling Feldman was clearly sympathetic to the bar owners, he didn’t depart from the Jacobson analysis.

A federal judge in New Orleans refused Monday to block a state order closing bars to stop the spread of COVID-19, handing a defeat to 10 southeast Louisiana bar owners who had sued to stop the closure.

U.S. District Judge Martin Feldman said the closure order was legal under the broad powers a governor has under public health emergencies such as the current pandemic.

Feldman, a judge in the federal court system’s Eastern District of Louisiana, ruled even as a hearing in a similar suit played out in the Western District. Democratic Gov. John Bel Edwards, who issued the order last month, was testifying in that lawsuit Monday afternoon, according to a Twitter post by an Edwards spokeswoman. The hearing was before U.S. District Judge Robert Summerhays in Lafayette, where 11 bar owners were fighting the closure order.

Feldman heard arguments Friday. “The case turns on a classic who-decides question: As between democratically accountable state officials and a federal court, who decides what measures best protect Louisianans during a global pandemic?” Feldman wrote. “The answer is state officials.”

Edwards, naturally, gloated after his victory.

“I am pleased that Judge Feldman upheld bar restrictions, which is one of the critical mitigation measures put in place to slow the spread of COVID-19 in Louisiana to protect and save lives,” the statement said. “The evidence is clear that mask mandates and closing on-site consumption at bars work, and more than a month after implementing both measures in Louisiana the data shows they are working.”

The chances aren’t great that Judge Summerhays in Lafayette will do anything different in that case. Nor are they great that the Fifth Circuit will throw out Edwards’ edict, based on the Jacobson standard.

The remedy is political, not judicial. Courts across the country have been mostly reticent to throw out even highly arbitrary COVID edicts, Wisconsin notwithstanding – and in that state, when a judge negated Gov. Tony Evers’ bar closure, there was no particular spike in COVID cases. 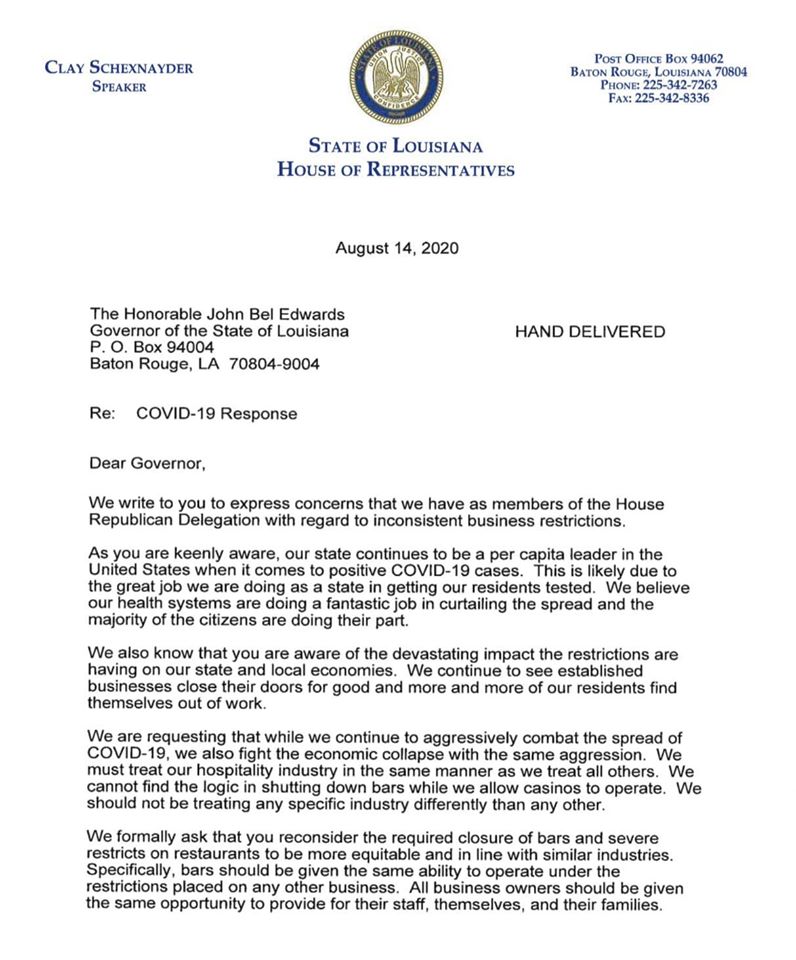 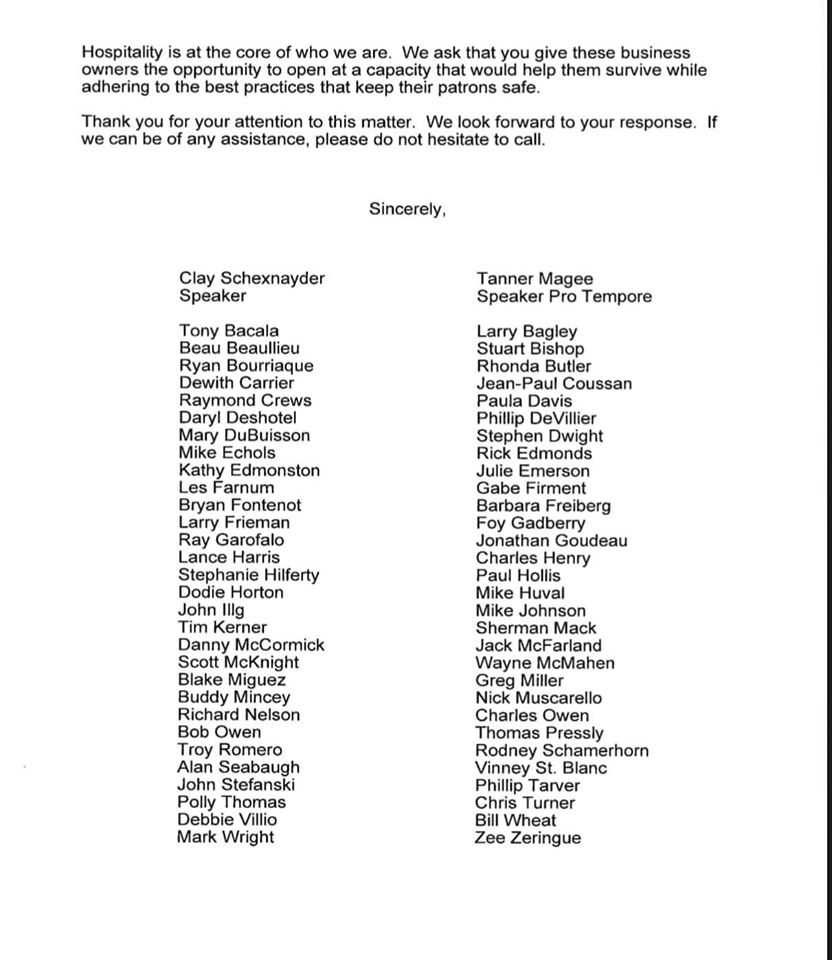 …and Edwards almost assuredly laughed at it.

House Speaker Clay Schexnayder could have had some leverage against Edwards with respect to items like the bar closure. If he had encouraged the signers of that letter to also sign Rep. Alan Seabaugh’s petition ending Edwards’ emergency and then taken the petition in hand to use as a lever against Edwards’ overreach, he would be in a position to negotiate the end of the bar closure.

But Schexnayder failed to take advantage of so obvious a political tool, and instead he squelched the petition in favor of meaningless pleas Edwards, who fancies himself a dictator and is clearly perfectly comfortable with the state’s economy falling apart, has no interest in entertaining.

Meaning that if you own a bar in Louisiana currently shut down by John Bel Edwards, no one in Louisiana will help you. You don’t matter. What you thought was a legitimate business and livelihood is valueless – even the tax revenue you generate is less important to Louisiana’s politicians than what booty they might trail in from the federal government.

Act accordingly. Perhaps we’ll come to see you when you’ve established operations in another state.

Interested in more news from Louisiana? We've got you covered! See More Louisiana News
Previous Article Have You Noticed That Louisiana Auto Insurance Rates Are Coming Down?
Next Article Is this the NINTH Circuit? Judge Panel Strikes Down California High-Capacity Magazine Ban