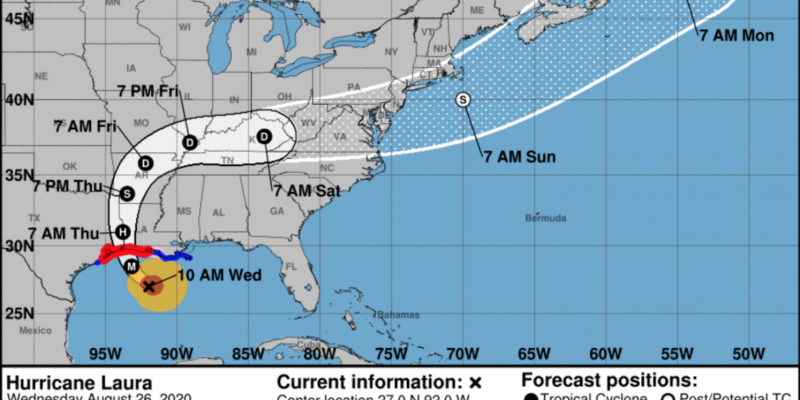 The Jefferson and Orange county areas of East Texas are expected to be the first to be hit by what could become a category 4 hurricane forecasted to make landfall Wednesday night. Gov. Greg Abbott said residents living in far-East Texas have a few more hours to evacuate safely.

Most Texans have taken this seriously, Abbott said at a Wednesday news conference in Austin, noting that more than 5,000 people had already evacuated.

Local providers have done a good job in terms of keeping supply chains open, he said. More than 400 buses have been made available, 82 boats, 60 ambulances and 75-plus paratransit vehicles.

A total of 29 counties have been listed in the state’s disaster declaration, which make them eligible to receive federal disaster relief through FEMA.

The state has set up a disaster recovery task force and emergency management personnel are in place for post landfall efforts. Currently, UH-60 Blackhawks and UH-72 Lakota air crews are on alert at Austin-Bergstrom International Airport and San Antonio to assist with any emergency search and rescue or emergency evacuations.

More than 70 members with the Texas Army, Air National Guards, and Texas State Guard with the Texas Military Department (TMD) have been activated and are pre-positioning throughout the state. Their transportation teams with high profile vehicles have already moved to support local and state agencies.

For residents concerned about exposure to the coronavirus at evacuee centers or hotels, there are 1,700 testing locations in Texas, the governor’s office said.

“Catastrophic storm surge, extreme winds and flash flooding is expected along the northwest Gulf Coast tonight. Only a few hours remain to protect life and property,” the NHC warned residents of the eastern Texas and western Louisiana coasts.

“Unsurvivable storm surge with large and destructive waves will cause catastrophic damage from Sea Rim State Park, Texas, to Intracoastal City, Louisiana, including Calcasieu and Sabine Lakes. This surge could penetrate up to 30 miles inland from the immediate coastline.”

Interested in more news from Texas? We've got you covered! See More Texas News
Previous Article We’re About To See A COVID Hurricane In Louisiana
Next Article NELSON: The Truth About COVID-19 In Louisiana Doesn’t Come From JBE’s Briefings