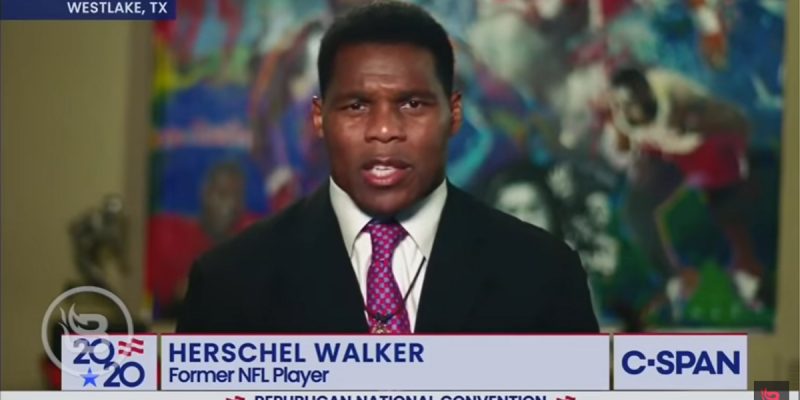 You’ll hear an awful lot about Tim Scott and Nikki Haley last night as the headliners of the Republican Convention speakers, and for good reason – both gave well-executed, inspiring speeches which did good work countering the Left’s narrative that America is a racist, unjust country. Both offer rags-to-riches stories of opportunity and love, and both can credibly debunk the idea that because some people out there might be bigots it isn’t possible to succeed. We liked both speeches.

But while politicians giving political speeches are certainly an art form worthy of some note, the best moments from the convention weren’t those.

Instead, a pair of short speeches by real Americans stole the show. It was when Herschel Walker and Maximo Alvarez addressed the convention that the Republican narrative really shined.

Walker you know. The former Heisman Trophy winner has known Donald Trump personally for 37 years. Trump was, after all, the owner of the New Jersey Generals of the old United States Football League, and in 1983 he made a massive splash by signing Walker out of the University of Georgia before his four years of eligibility were up. At the time the NFL didn’t take early-entry draftees, so Trump turning Walker into a millionaire “before his time” was something of a radical move.

Herschel Walker isn’t a politician. He’s a veteran public figure, though, and while he isn’t the most pristine public speaker it’s still extremely impressive to watch him – when he was in college, he could barely get anything out thanks to a stutter left over from his childhood. While the USFL didn’t last, Walker had a long career in pro football and has done fabulously well for himself. He isn’t trying to get into politics and he isn’t particularly political, though he’s clearly more right than left in his worldview. Instead, he’s an old friend of the President defending him against years of daily, or hourly, calumnies in the press.

But perhaps even better than Walker’s defense of Trump, and it’s hard to get better than the mental image of Donald Trump in a business suit riding the It’s A Small World ride at Disney World, comes from someone who isn’t a public figure. Maximo Alvarez is a Cuban immigrant and a businessman in Miami, and his speech was perfect for the national moment. It’s an emotional, in-your-face rebuke to the socialists infesting the Democrat Party and controlling Joe Biden, and it’s a history lesson for too many Americans who badly need it.

The part in Alvarez’ speech that resonates most isn’t the statement that there’s no other place to go, though he’s certainly correct about that and it’s a great rallying cry for the forces of freedom. It’s where he says the Democrats spent most of their convention talking about political power. “Power for them,” he says. And that is precisely correct, and it’s a perfect summation of everything that happened last week – a bunch of politicians and politicos from various levels of government discussing ways and means of gaining political power and influence for themselves and making promises of free stuff for the people who cooperate in giving them that power.

Nobody else at the convention, at least in the speeches we heard, offered so incisive a judgement on the Democrats. It’s the best statement we’ve heard from any Republicans all year. For that, Mr. Alvarez is the brightest star of the convention’s first night.