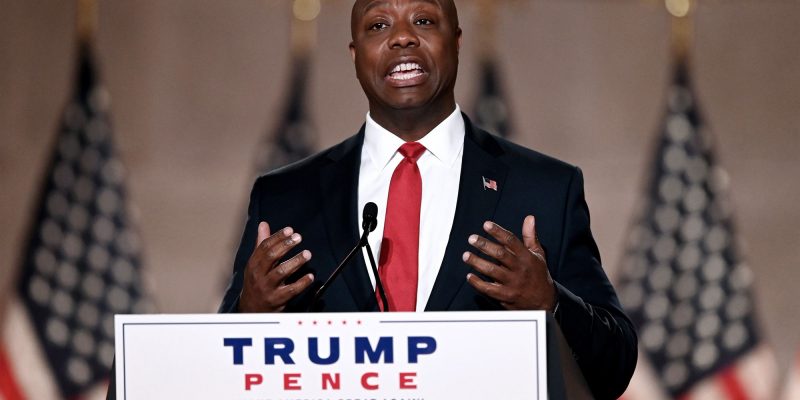 Viewers tuning in for the first day of the 2020 Republican National Convention were in for quite a treat as the high-quality video production and incredibly effective speakers combined for an exceptionally spectacular performance by the “GOP.”

It is safe to say that the higher-ups at the Democrat National Committee were thrown into a frenzy as they watched their bitter rivals deliver a stunningly effective start to the RNC.

The first night almost seemed like a finale as Congressman Matt Gaetz (R-FL) ripped into “basement-dweller” Joe Biden and the radical left’s agenda to “defund the police” before praising Donald Trump for being “the first president not to start a war” in recent memory.

Republican rising star and congressional candidate Kim Klacik went “up to bat” next. She delivered a scathing repudiation of Democrats’ failure in America’s inner cities saying, “Democrats have controlled this part of Baltimore City for over 50 years and they have run this beautiful place into the ground.”

Then appeared American football legend Hershel Walker who delivered an impassioned endorsement of Trump saying, “It hurt my soul to hear the terrible names people called Donald, the worst one is ‘racist.’ I take it as a personal insult that people would think I’ve had a 37 year friendship with a racist. People that think that don’t know who they’re talking about. Being from the deep south, I’ve seen racism. I know what it is. And it is not Donald Trump.”

Andrew Pollack told the heart-wrenching story of how his daughter, Meadow, was gunned down while heroically trying to shield a younger student in the mass-shooting at Marjory Stoneman Douglas High School. Pollack blamed “far-left Democrats” for the policies that allowed the shooting to happen and he credited President Trump for taking executive action to make reforms.

Mark and Patricia McCloskey, the St. Louis couple who defended their home from an angry mob, spoke next saying that the “radical Democrats” want to “abolish the suburbs altogether.” Mrs. McCloskey warned, “Make no mistake: No matter where you live, your family will not be safe in the radical Democrats’ America.” Mr. McCloskey urged, “President Trump will defend the God-given right of every American to protect their homes and their families.”

When reports began to circulate that President Trump would speak on all four nights of the convention, many expected four speeches but the GOP had something far more creative in mind. They featured real stories of Americans who have been helped, or in this case saved, by President Trump including six former hostages who the president brought home safely from captivity overseas.

One of my personal favorites was a Cuba-born Maximo Alvarez, a naturalized American citizen who choked back tears as he argued that this election is a choice between freedom and tyranny. “I’ve seen movements like this before,” he explained. “When Fidel Castro was asked if he was a Communist, he said he was a Roman Catholic. He knew he had to hide the truth. President Trump, he’s fighting the forces of anarchy and Communism… and what about his opponent?… I have no doubt, they will hand the country over to those dangerous forces.”

Former South Carolina Governor and Ambassador to the U.N. Nikki Haley also made her case to the American people, arguing that President Trump represents strength while Joe Biden represents weakness. “Democrats’ vision for America is socialism and we know that socialism has failed everywhere it has been tried,” Haley declared. “America is not a racist country.”

Donald Trump Jr. made his case to re-elect his father, quoting Thomas Jefferson as saying, “I pledge eternal hostility against every form of tyranny over the mind of man.” Don Jr. opined, “If Democrats really cared about the forgotten men and women of this country, they would do exactly what my father is doing.”

Last but certainly not least was U.S. Senator Tim Scott (R-SC) who cemented his place as a future presidential contender with a speech that cut through the current political and racial division. Scott called out Democrats for walking out on police reform negotiations before attributing his election to “the evolution of the southern heart.” Scott invoked the words of Dr. Martin Luther King Jr. saying, “In an overwhelmingly white district, voters judged me not by the color of my skin but on the content of my character.” Scott concluded by asking voters to look not only at the candidates’ words but also at their record before decrying Biden’s words and actions as having worsened race relations in America.

“Make no mistake, Joe Biden and Kamala Harris want a cultural revolution, a fundamentally different America. If we let them, they will turn our country into a socialist utopia and history has taught us that path can only lead to pain and misery,” Scott pleaded.

C-SPAN took calls from voters afterward and the video below of an Ohio Democrat switching parties was confirmation that Republicans may have captured lightning in a bottle.

Interested in more national news? We've got you covered! See More National News
Previous Article BAYHAM: The First Night of the Republican National Convention Was A Good Start
Next Article Herschel Walker And Maximo Alvarez Were The Highlight Of The RNC Last Night