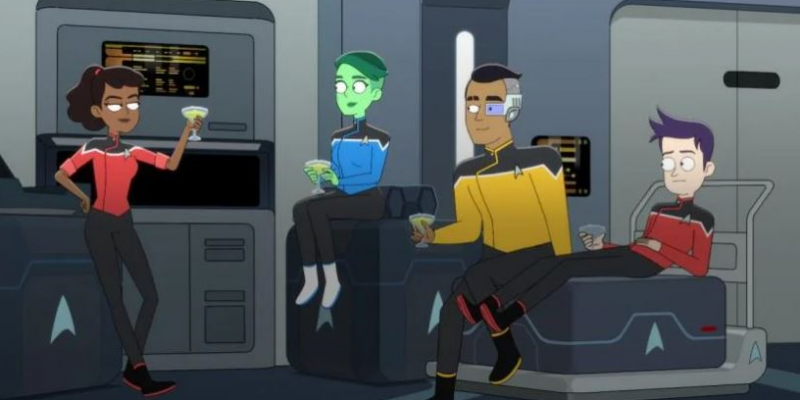 Animation has not been too kind to Star Trek.

While the animated Star Trek of the 1970s is sometimes panned as bizarre and cheaply made, it was crafted with loving hands in the spirit of the classic 1960s live-action series. As such, it is looked at by fans as an semi-apocryphal fourth season of the original run.

“Lower Decks,” the latest incarnation of the Trek saga, and the second animated series in the canon, premiered last week via CBS/Viacom’s streaming platform All Access. It captures well the sound effects, design motifs, and other aesthetics of the “Next Generation” (TNG) era, dropping entire metric tons of references from throughout the many Trek series. Alas, the show seems to  throw it all into the same malfunctioning food synthesizer that gave us the recent CBS offerings of “Picard” and “Discovery,” and with a dash of Adderall for kick. (See our review of “Picard” here.)

Merging rapid-fire dialogue reminiscent of “The Gilmore Girls” and the animation style of the ever-popular “Rick and Morty,” the inaugural episode of “Lower Decks” gives us a look at the lives of the unknown crew members who keep the ship running — even a lesser-regarded vessel such as the U.S.S. Cerritos. In these oft-ignored corridors, we meet Ensign Brad Boimler (voiced by Jack Quaid), an ambitious, Federation manual-bound young officer whose quirks are tolerated by Captain Carol Freeman (Dawnn Lewis). Freeman’s daughter, Ensign Beckett Mariner (Tawny Newsome), is more instinctive and seemingly in a post-teenage rebellion against her mother and other ranking officers. We also meet green-hued Tendi (Noël Wells), a medical officer from Orion (to prove that Orion women are no longer the dancing slave girls from earlier series, we’ll suppose), Rutherford (Eugene Cordero), a human engineer with a unreliable implant that attempts to make him think like Mr. Spock. The breakneck pacing of the pilot episode made it difficult to recall the other characters.

The plot of the premiere is not at all important, but here’s a summary: Ensign Boimler gets sucked on by a gargantuan arachnid kept for agricultural purposes on a visited planet (the crew was making “second contact” with its pig-like inhabitants). Meanwhile (in traditional TNG Plot A/Plot B script mechanics) the Cerritos crew is infected with an illness brought from an insect bite on the planet, turning everyone into flesh-eating zombies. The only cure for the zombie bug was goo from the spider’s mouth — still all over Boimler’s body.

Though juvenile in scope and with familiar situations (e.g. the zombie craze) do not mistake this for CBS’s attempt at tapping in to the children’s or teen markets. Throughout the pilot episode is a preoccupation with alcohol consumption, inconsistently bleeped swear words, and sexual references. And this is where the audience may be confused: is it a mad-cap teen show in the vein of “Justice League” or an adult animated comedy a la “Family Guy?” It is neither, but transphasically caught between decks (bonus points if you caught the TNG reference).

It’s not that Trek can’t be done humorously. “Galaxy Quest” broke this barrier on the big screen, and “The Orville” on the small screen, plus more direct parodying in print media such as “Star Wrecked.” “Star Trek IV: The Voyage Home” (e.g. the one with the whales) was chock-full of humor, as were later Trek movies that dealt with the quirks of an aging crew and the passage of time.

With “Lower Decks,” we see a heroic attempt to beam in enough fan service to give a longtime Trekkie an I-remember-that moment or two, but not enough of the TNG vibe to carry on Gene Roddenberry‘s legacy.

The reviews reflect the craftsmanship of the show: they’re all over the board. After all, nobody is quite sure what they’re looking at, nor does the script camp out on any given topic long enough to make a point or build up to a humorous moment. The audience score on Rotten Tomatoes is hovering around 33% at the moment.

Perhaps it’s all for the best. If the same “Kurtz-Trek” crew (a reference to Alex Kurtzman, the chief producer) that gave us “Picard” and “Discovery” allowed these characters to philosophize on the grander meaning of the challenges faced, then we may end up with yet another postmodern, hedonist outlook on the Federation with morally ambiguous, un-likeable characters.
Trump Derangement Syndrome would surely seep into the show’s less-than-optimistic view on leadership in the 24th Century, with just enough guilt to make the social justice keyboard warriors happy. And that’s not comedy. All the ADD pacing, nostalgic beeps and door swish-sounds, and slapstick moments cannot successfully cloak the existential threat the franchise “Lower Decks” may represent.

Summary: The consensus of the reviews so far is that “Lower Decks” must pick a direction and stay with it. We’re prone to agree. We will also point out that a nadir point in Trek history was when TNG, “Deep Space Nine (DS9),” “Voyager,” and a movie or two were in production and pre-production in the early-to-mid-’90s. The kitchen was too crowded for Paramount studios, though DS9 eventually took on a life of its own and went on to exceed expectations. Perhaps it’s best to reassign these “Lower Decks” officers to new ships and let this series remain as a one-season blip on the radar like the previous animated entry.