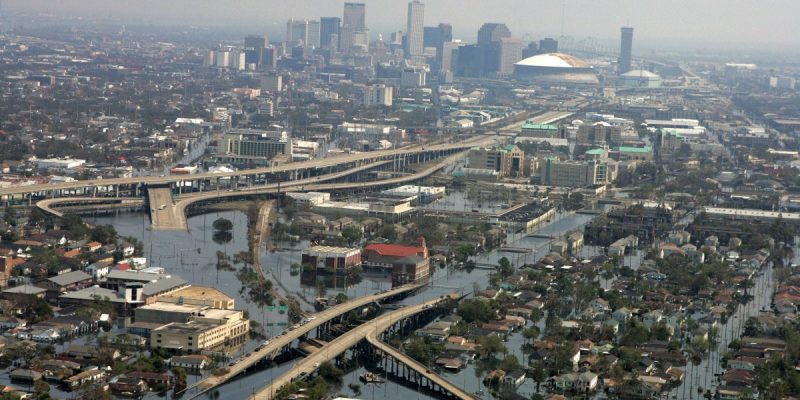 Hurricane Laura has brought its unpleasantry to Louisiana. But over time you can find a bright spot even with extremely and highly wind-swept dark clouds.

The end of this week will mark 15 years after Hurricane Katrina struck Louisiana (and almost that long since Hurricane Rita piled on). In a silver linings view, concerning the world of state and local politics it actually brought some benefits.

Politics in the near-epicenter, New Orleans, abruptly changed. After levees overtopped and broke, state and local officials, largely Democrats, tried to misplace primary blame for this upon the federal government, whether in the form of claiming the U.S. Army Corps of Engineers had fallen down on the job, to weaponizing the event as an indictment of the Republican Pres. George W. Bush Administration, to wild conspiracy theories that would not look out of place in today’s era, where the political left and Democrats bend over backwards to assert ludicrously that systemic racism in America exists, that deliberate destruction of levees had occurred to harm black folk.

In reality, although the federal government bore some fault for a flawed protection system and response, the main culprits were state and local government. A dysfunctional flood control system allowed cronyism to triumph over provision of adequate protection, while the indifference Democrat former Gov. Kathleen Blanco had shown in planning to deal with such a crisis turned into full-blown evasion of responsibility and failed leadership when it came.

In the aftermath, the outdated system of nearly two dozen levee authorities whose members often gained seats because of their political alliances rather than any real competence or commitment to the mission of flood control became far more professional and capable agencies merged into two regional entities. The city’s grappling with the after effects also exposed more fully the inefficient politicization present in its unique but needless multiplicity of offices that over the next few years also would consolidate to save money and work better. Even the remaining unreformed entity in the tragedy, the city’s Sewerage and Water Board, now faces tepid attempts at change.

Yet perhaps the most far-reaching consequence came in education. With the Orleans Parish school system shattered, out of chaos came opportunity that bore the country’s first all-charter, almost entirely open admissions set of schools that initially the state oversaw. Recently, the local district has retaken control of these, but the maximized school choice environment remains and its relative success over the previous dysfunctional monolithic system has presented a model emulated, to varying degrees, across the country.

At the state level, prior to the 2005 hurricane disasters Blanco had faced uncertain reelection prospects, as GOP Rep. Bobby Jindal, who she had defeated unconvincingly two years earlier, with additional experience had given every indication he would engage her in Round 2. However, her performance after the hurricanes sunk her chances, and she bowed out, sending Jindal on his way to the first non-incumbent general election win without a runoff in the state’s modern history.

Jindal reaped another benefit related to the disasters – a “false” economy that inflated state and local government revenues courtesy of over $100 billion in federal aid that would make its way through the state before and during his first term, most of it coming through his first year. Not only did this relieve pressure on state policy change to create more efficient revenue gathering and usage, it also allowed for Jindal (somewhat hesitantly) at the beginning of his term to fulfill a campaign promise of income tax cuts.

His popularity – he won a second term without a runoff by the largest margin ever in modern state history – allowed him to leverage other reform and policy changes into being, such as replicating Orleans education changes statewide, trimming the number of state employees and changing rules to help them work smarter and cost taxpayers less on pensions, and end the archaic charity hospital model with tremendous savings. The disasters directly affected the move to managed care and hospital provider contracts when the federal government suddenly yanked the years-long bonus payments the state had received for Medicaid justified by the disasters.

More likely than not Jindal would have defeated Blanco without the storms’ intervention, but he probably wouldn’t have garnered the mandate (or revenues) to make the changes when he did or as extensively so. In economic and good government terms, Louisiana would be farther behind than it is today.

Terrible costs in Louisiana of over 1,500 lives and tens of billions of dollars in damage will leave a permanent scar on the state and particularly in the New Orleans area (witness its gap-toothed neighborhoods). But that area and the state saw a changed politics as a result that brought better and more right-sized government with improved policy outputs.

Interested in more national news? We've got you covered! See More National News
Previous Article AUDIO: I Did Radio In Chicago This Morning, And…
Next Article PERRICONE: Protect The American Lighthouse On Nov. 3