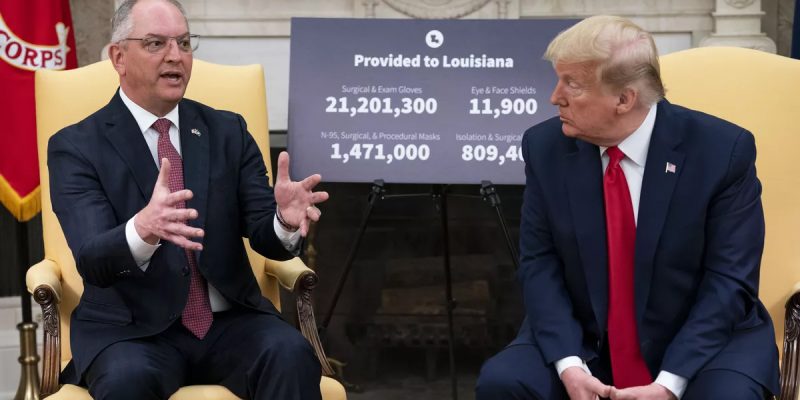 It isn’t that Edwards’ endorsement would make a difference for Trump in Louisiana. Trump is going to win Louisiana fairly handily. But Edwards needs to endorse Trump for his own sake, and should he endorse Trump it would help the president a little to balance out the parade of disgraced NeverTrumper Republicans, the John Kasichs and Jeff Flakes and so forth, who decided to be pet “conservatives” on Team Biden. None of those clowns have a future in elective politics anymore, but they can certainly find their way to the grift as paid CNN contributors and so on. Were Edwards to endorse, this would be someone who actually continues to hold office in a state that isn’t safe for his party crossing the line to back Trump.

Sure, you can call this concern-trolling if you want. I’m not going to argue with that characterization. Given the nonstop fusillade of concern-trolling done to Republicans, maybe this is payback of a sort.

But there are reasons why it would be in Edwards’ interest to back Trump for the November election.

First, if he were to do that it would preserve some sense of viability for Edwards’ potential Senate campaign against John Kennedy in 2022. If Edwards stays neutral or even worse should he endorse Biden, it would mark him as a non-entity in Louisiana politics and Kennedy has a huge, easy issue to clobber “Liberal John Bel Edwards Who Wouldn’t Endorse The President” all campaign long. If you want some defense to that, and if you want to position yourself as a centrist, you might as well endorse across the aisle for the guy who’s going to easily win your state and will likely get re-elected. Trump won’t exactly help you in that race against Kennedy, but maybe he isn’t making trip after trip to Louisiana for Kennedy, either.

Second, and here’s something you might not have noticed: a week and a half ago, Louisiana had a major hurricane blow through the western half of the state which did billions of dollars in damage and even now there are hundreds of thousands of Louisianans who don’t have power. Tens of thousands of homes are ruined.

And where is Joe Biden?

If he can go to Kenosha and pal around with an accused rapist and his family, why can’t he come to Louisiana to show concern for people who lost everything and haven’t even done anything wrong.

John Bel Edwards is a Democrat governor in the Deep South. He’s the only one of his kind. And the Democrats’ nominee won’t even fly in for the obligatory “I feel your pain” visit? That’s a pretty serious slap in the face to Louisiana as a state and Edwards as its governor, isn’t it?

The way you respond to that slap is to slap back and say “I’ve had enough of the Hard Left running my party, and I’ve had enough of being treated like I don’t belong. I’m not in line with this man who’s sold his soul to Bernie Sanders and a bunch of communists, who’s played games with law enforcement and in doing so has insulted my family, who’s for abortion up to and including birth, which offends me as a pro-life governor, and it’s time for Democrats like me to take our party back. So I’m with Trump now, and I’m for rebuilding a sane, competitive Democratic Party.”

Do that and you make headlines, and instead of being a control freak with the worst economy in the country and a more-vibrant-than-expected active recall effort afoot to get rid of him, you’re now a courageous centrist willing to point out what everybody knows but is afraid to say about Biden.

But the third reason is the real reason why Edwards needs to endorse Trump.

Namely, because he’s kept Louisiana’s economy on ice for six months and it now has the worst job performance in America, while UHaul rates for trucks heading to Texas are double what they are coming back, which is an indication that outmigration is becoming endemic, Edwards has hooked Louisiana up to the federal government as its sugar daddy like never before.

He already bit off $3 billion worth of federal swag, and it’s more or less spent. Now he’s out begging for more. He’s borrowing from the feds to keep the state’s unemployment insurance fund from going broke, and he’s staring a deficit for next year of nearly a billion dollars in the face.

If you’re going to take the king’s coin, you are the king’s man. And if Edwards is going to continuously beg Trump for help because he won’t get out of the way and let Louisianans help themselves, especially now that he’s going to need billions of dollars in hurricane recovery money for Lake Charles and parts north thanks to Laura, sooner or later you’re going to have to pay homage and obeisance to the king.

Trump isn’t a king, but he might as well be given what Edwards, who thinks of himself as a duke or a baron around here, has made of him. It’s coming to a point where Trump could well make the demand that Edwards bend his knee.

And he might as well. To endorse Biden would be political suicide in Louisiana. And to stay neutral would make Edwards irrelevant in the extreme.