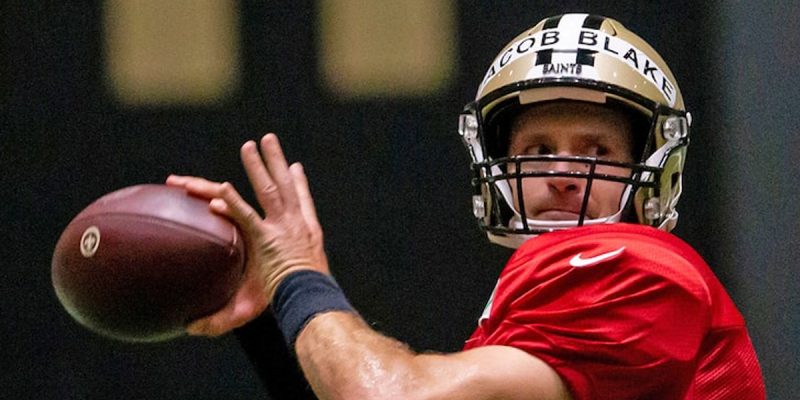 If you have ever wondered how the national message is being distorted by the news media, and how craven athletes are surrendering their ability to reason for themselves, one only has to look at the sticker on our esteemed New Orleans Saints quarterback’s helmet.

Now every Saints fan holds Drew Brees in the highest regard, for his talent on and off the field. No one can question his Hall of Fame abilities. No one. But at my age, I have seen a disturbing evolution of the NFL, as well as other sports. In fact, I dare call them sports anymore, but engines of propaganda. Just look at what the Packers are doing.

I was once a season ticket holder of the Saints–no more. But I am still a fan, but from afar. I was at the first game they played in the old Tulane Stadium in 1967, when pro football players were real role models. Not today. Today, they are models for Chinese-slave-made shoes, jerseys, shirts and any other paraphernalia, which can bear the team’s logo.–all for an endorsement contract. The NFL isn’t what it used to be, and I fear it is gone forever.

Now we see Drew Brees adorn his helmet with a criminal’s name for the sake of “political correctness.” Jacob Blake is a criminal. He fought the police and resisted arrest. He sought redoubt in his automobile, where he had a weapon waiting for him. He was tased, but shook it off and continued to resist. Under Supreme Court jurisprudence, the officers acted Constitutionally. See Tennessee v. Garner.

No one can tell Drew Brees what to do when his pocket collapses around him and he is facing a blitz. He must rely on his instinct and experience to survive a sack. The same goes for these officers. Drew Brees and others are “Monday-Morning Quarterbacking” these officers without the requisite experience, and by wearing that stupid sticker on his helmet, he tells experience law enforcement officers he knows nothing about the streets and the perils which lie thereon. Therefore, please explain why would one celebrate a criminal and at the same time insult the very people who give you the security to play on Sunday afternoon. Cops are fans, too.

It’s Fourth Down, Drew, and you have just been sacked–by tripping over your own feet.