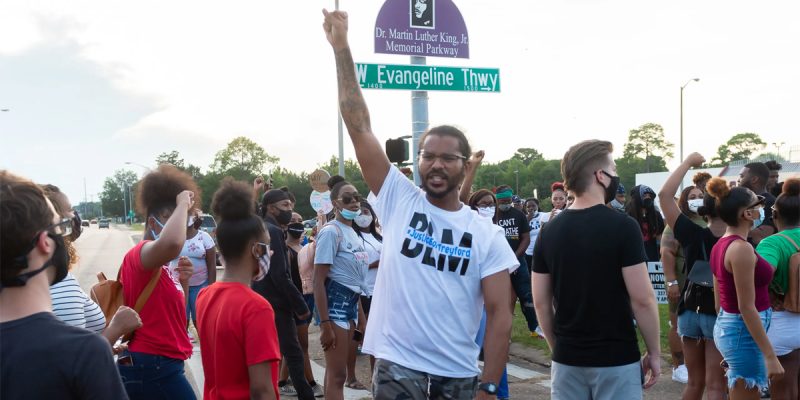 Republican Lafayette Mayor-President Josh Guillory might overstate his case a bit, but he has the right idea to counsel against nonprofit organizations in sheltering Hurricane Laura evacuees as long as selfish protesters take to the streets of the city-parish.

Guillory sent notice to area nonprofits asking that they hold up with shelter establishment in the wake of the storm’s strike last Thursday, While the Lafayette area received just a glancing blow, to the southwest major property damage occurred, displacing many and likely for some time. As justification, Guillory noted protest activity stemming from the police shooting of Trayford Pellerin, who ten days ago brandished a knife a convenience store. He exited, with Lafayette police in tow, walked half a mile to another store, and made set to enter it, ignoring multiple times police instructions to desist and two unsuccessful Taser attempts. Apparently fearing Pellerin would attack people inside the second store, police opened fire when he attempted to enter, killing him.

Since then, protests have popped up around Lafayette, without any reported acts of violence. But Guillory noted the potential for it to occur, and therefore he could not guarantee the safety of an influx of refugees. This didn’t mean that organizations couldn’t take people in, just that the city gave notice that they might be at risk. For that, some of those invested in protesting cried foul (with one particularly uneducated complainer saying Guillory wanted to instill “fear” into people from coming together to exercise their “second amendment” rights; rather than promote gunplay, she probably meant to refer to the right to assemble peacefully under the First Amendment).

Experiences elsewhere prove Guillory correct. Even if no reports of violence had surfaced from Lafayette protest activities, with gatherings full of misdirected passion, ignorance, and hatred, it doesn’t take much for harm to come to innocent people, as happened in recently in Portland, Oregon.

And it’s impossible to argue these protests don’t foment emotionally-driven mass ignorance. Like others, without evidence they assume not only did a police shooting occur unnecessarily but also it came with a bad motive, relying on the canard that “systemic racism” in America somehow creates a “war” on blacks. Nor do they know the true statistics of police shootings in America, in that police are less likely to open fire on black suspects than the proportion of arrests by race would suggest.

Consider as well that among several high-profile incidents where police shot black suspects, in almost every instance the suspect was, in a word, high. That was true in the previous such incident in Louisiana, the death of Alton Sterling in Baton Rouge, and at national level concerning the death of George Floyd at the hands of police, his autopsy shows he had ingested a potentially lethal dose of fentanyl just prior to his death.

Such people act erratically and irrationally, hence the refusal of Sterling and Floyd (and Pellerin perhaps; an autopsy will tell all) to comply with lawful police commands and continue to struggle with and threaten officers and/or others. It’s no wonder police in these situations increasingly take no chances, and jurisprudence as such gives officers wide behavioral latitude without prejudice in these instances.

Yet despite this knowledge base, protesters ignore or reject it in a rush to judgment with unsustainable assumptions and patently false notions that adhere to ideology rather than fact. There’s a word for such people: unreasonable, and unreasonable people do unreasonable things, such as what went down in Portland.

But perhaps worst of all is this form of venting also caters to a need to draw attention to oneself, whether the form of protest becomes violent. What to make, for example, of the idiot who declared the way to peace was to set up a barbecue on the street outside of Guillory’s house, thereby impeding traffic and disturbing the neighborhood?

Unfortunately – as true today as it was three decades ago when a significant portion of my doctoral dissertation dealt with the impact of personality on political attitude formation – not much is known about how personality plays into political behavior, as a consequence of measurement issues and definitional difficulties. There is somewhat of a consensus around a “big five” traits that have an indirect impact, more mediated by factors inducing collective action, but not much else.

In this paucity of information, suffice to say that protesting over what is for most an abstract issue far removed from daily experience, and investing so much personal capital into doing so, fulfills a set of psychological needs rather than instrumental ones. Which is to say emotional, rather than rational, behavior holds sway, elevating the unpredictability of such behavior.

An environment that encourages this mode of behavior to come to the forefront among both residents and the magnetically-attracted like-minded protest tourists probably isn’t one that you should invite into a whole bunch of folks from out-of-town, even for humanitarian reasons. So, while it’s unlikely that a storm refugee while in town will become engulfed by a mob protesting under the guise of a false narrative, should it happen we’ve seen the consequences of when these attitudes become expressed to their logical extreme, as in Portland.

Best to err on the side of caution. Guillory did his job by giving fair warning. Regardless of whether refugees show up if shelters open in the city-parish, not to do so would have made him derelict in that.