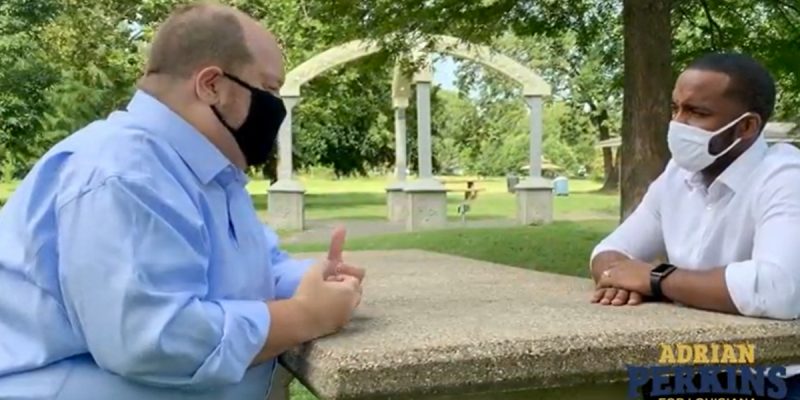 This is an academic discussion, of course, because nobody expects anything other than an easy re-election win for Sen. Bill Cassidy this fall. Cassidy is a Republican in a red state, he’s got a sizable war chest, he’s been very visible with lots of good, centrist ads talking about veterans and disaster relief and he doesn’t make major gaffes. There is no real opening for a Democrat to knock him out, and as Jeff Sadow has written, the candidate the Democrats have settled on as their great hope to beat him is…

Well, let’s just say he’s flawed and leave it at that.

But Adrian Perkins, while he can’t articulate a vision for Louisiana to be furthered in the U.S. Senate that the majority of the state’s voters would agree with, because he’s a far-left, Soros-aligned Democrat whose own record as mayor of Shreveport indicates he isn’t fit for statewide office based on his personal conduct and Hard Left political stances, has decided that his best option is to go after Cassidy, a doctor who has spent his entire time in the Senate trying to reach some sort of consensus on a private-sector-based alternative to Obamacare, on health care.

Which is how this ad came about…

One wonders how the decision was made to put this out there. Practically everything about it is wrong.

First of all, nobody is going to take at face value that this guy is a Republican activist, and if anybody takes this ad seriously they’re going to vet him and he’s inevitably going to be discredited.

Second, essentially the message is that Bill Cassidy is a bad guy because he’s not for health insurance for sick people. That sounds like such a national Democrat message most Louisiana voters will immediately tune it out and then assume Perkins is a national Democrat, which he is. If you want to win statewide in Louisiana as a Democrat, you have to do what John Bel Edwards did – which is to run as a conservative.

Perkins comes from the same military background as Edwards. Why he isn’t running on that rather than trying to trash Cassidy from the left on health care, which Perkins has zero expertise on, is beyond us.

Third, a fat white guy as your poster boy? Nobody cares about his problems. Find a sickly-looking divorced white soccer mom who has to take care of two kids her jackass ex-husband won’t pay child support for and who can’t get health insurance from her job and is on Obamacare.

It doesn’t matter whether she says she’s a Republican or not – Republican (and most independent) voters automatically assume that’s a lie anyway, and it’s already been done: Kathleen Blanco’s famous ad trashing Bobby Jindal in 2003 with some crotchety old doctor who accused Jindal of denying people healthcare as then-secretary of DHH before finishing with “And I’m a staunch Republican” might have worked 17 years ago, but what everybody remembers about Blanco was that she was a disaster as governor.

Nothing about this whiny ad works. It offends us – not because it’s a bunch of left-wing crap, but because it thoroughly talks past the voters in Louisiana. Whoever Perkins’ consultants are, they’re stealing money from him.

Interested in more national news? We've got you covered! See More National News
Previous Article BACALA: On Special Sessions And Petitions To Reopen Louisiana
Next Article SADOW: What To Hope For From The Upcoming Special Session