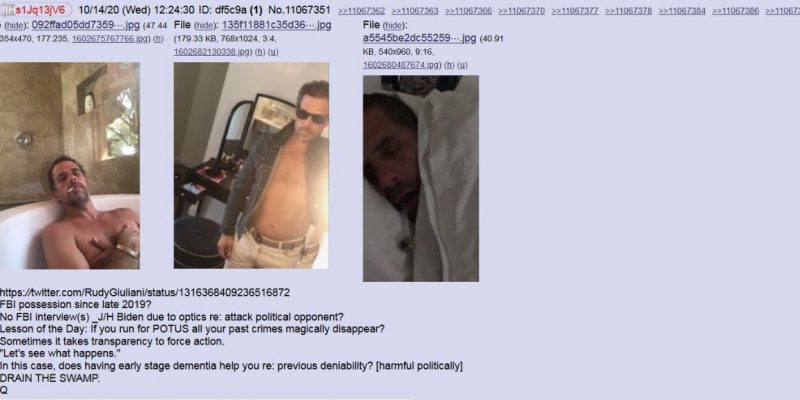 U.S. Sen. Ron Johnson, chairman of the Senate Homeland Security and Governmental Affairs Committee, said the committee will now be investigating newly released emails published by the New York Post that purport to reveal that Hunter Biden introduced his father, Joe Biden, while he was the vice president of the United States, to an executive at Ukrainian gas firm Burisma. The emails contradict claims Joe Biden has repeatedly made to the media.

The New York Post reported Wednesday that, “Hunter Biden introduced his father, then-Vice President Joe Biden, to a top executive at a Ukrainian energy firm less than a year before the elder Biden pressured government officials in Ukraine into firing a prosecutor who was investigating the company,” according to emails obtained by The Post.

“The never-before-revealed meeting is mentioned in a message of appreciation that Vadym Pozharskyi, an adviser to the board of Burisma, allegedly sent Hunter Biden on April 17, 2015, about a year after Hunter joined the Burisma board at a reported salary of up to $50,000 a month.”

Johnson, R-Wisconsin, told Fox News the committee was in contact with the source of the emails.

“Although we consider those communications to be confidential, because the individual in this instance spoke with the media about his contact with the committee, we can confirm receipt of his email complaint, have been in contact with the whistleblower, and are in the process of validating the information he provided,” Johnson told Fox News.

Joe Biden, the Democratic nominee for president, has repeatedly said he did not know about his son’s business dealings with the Ukraine, including direct quotes published by USA Today on Sept. 25, 2019, among others, including those published by The Post.

Biden campaign spokesman Andrew Bates said in a statement to Politico Wednesday that the meeting reported by the New York Post was not on Biden’s “official schedules” and did not take place.

“We have reviewed Joe Biden’s official schedules from the time and no meeting, as alleged by the New York Post, ever took place,” Bates said.

“Investigations by the press, during impeachment, and even by two Republican-led Senate committees whose work was decried as ‘not legitimate’ and political by a GOP colleague have all reached the same conclusion: that Joe Biden carried out official U.S. policy toward Ukraine and engaged in no wrongdoing,” Bates added.

According to Joe Biden’s comments made at a Jan. 23, 2018, Council on Foreign Relations event and recorded and published by the Wall Street Journal, Biden described how he threatened to hold back a $1 billion loan deal to the Ukraine if a prosecutor investigating his son was not fired.

At the event, Biden described a conversation he had with Ukrainian officials during his 13th or 14th trip to Kiev while he was vice president in the Obama administration. Biden told the audience that he told the Ukrainians,

“We’re not going to give you the billion dollars. They said, ‘You have no authority. You’re not the president.’ I said, ‘Call them.’” Members of the audience then laughed.

The email correspondence was contained in “a massive trove of data recovered from a laptop computer,” the New York Post reports. Other material extracted from the computer includes a 12-minute video that appears to show Hunter smoking crack and engaged in a sexual act with an unidentified woman, in addition to other sexually explicit images. Some of these images have already been published online.

Of the videos and images, former New York City Mayor Rudi Giuliani said, “The stuff we’re in possession of contains 1,000 maybe more photographs that are highly inappropriate to illegal.” He also claims China has to have seen the information on the laptop and the contents appear to pose a national security threat.

Giuliani: The stuff we are in possession of contains 1000+ photos that are from highly, highly inappropriate to illegal…Everything that the American people are going to look at over the next 5 days, China has been looking at for a LONG time.

This is a National Security threat. pic.twitter.com/MwG4GzJSBW

“The Post’s primary Twitter account was locked as of 2:20 p.m. Wednesday because its articles about the messages obtained from Biden’s laptop broke the social network’s rules against ‘distribution of hacked material,’ according to an email The Post received from Twitter,” The Post reported.

Twitter also blocked users from sharing the link to The Post article describing it as “potentially harmful.”

Facebook spokesperson Andy Stone tweeted, “While I will intentionally not link to the New York Post, I want be clear that this story is eligible to be fact checked by Facebook’s third-party fact checking partners. In the meantime, we are reducing its distribution on our platform.”

In response, Sen. Josh Hawley, R-Missouri, is threatening a formal investigation in what he said appears to be election interference. He wrote a formal letter demanding to know why Facebook was “censoring a news report.”

Pictures of Hunter Biden were posted on an online chat forum: